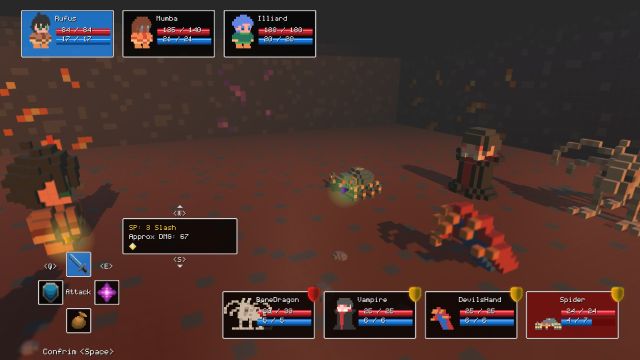 If you're an RPG fan who's browsed 3DRPG's Steam page, chances are you've asked yourself the wrong question: Do I like 3D Dot Game Heroes-style presentation enough to purchase a turn-based, procedurally generated RPG that also utilizes it? Granted, it's a fair point to consider, especially since it'll have you spending hours venturing through a fantastical realm comprised of colored, polygonal blocks decked out to resemble an 8-bit, sprite-generated adventure from way back. Regardless of the campaign's length, the going may become torturous if you're not into its visuals. Personally, I dig this art style and would love to see more of it in future titles. However, they hardly factor into my overall evaluation of this roleplaying product...

The real question you should ask yourself is this: Can I at least tolerate a few hours of mindless grinding and farming with a bare-bones storyline?

3D skimps on narrative and focuses most of its attention on basic RPG elements and party-building mechanics. You only receive two plot beats throughout the whole experience, with one cutscene serving as your introduction. As it turns out, you're dead and in Hell. You don't want to be there, though, so you quickly remember who you are and strike a deal with the resident dark lord, Burzur. He tells you he'll grant you freedom if you complete one item on a list of quest objectives. Of course, you see the standard motivations for any afterlife escapee, like finding your murderer or trading your soul with another person. If you don't want to perform those tasks, though, you can also amass a tremendous pile of money, fish the legendary Leviathan out of the sea, or become a master blacksmith.

From there, Burzur send you on your way. You visit the first village thinking that maybe you can advance the story or embark on side quests, but NPCs there only offer lightly comical flavor text, directions to your objective, or their conditions for joining your party. You see, this game allows you to recruit anyone in a town who's wandering about the place. On the surface, that sounds like a unique system with a lot of potential for testing out tons of party combinations. In actuality, recruitable adventurers make up all of the towns you visit, and townies are just a randomly generated allies. You don't get to enlist the town drunk, the mayor, the weapon shopkeeper, the princess, the old widow, the dog roaming the street, or any other typical RPG citizen as the game's Steam page seems to imply. Literally everyone is just an arbitrary, wandering warrior who dispenses useless dialogue and might be useful in combat. 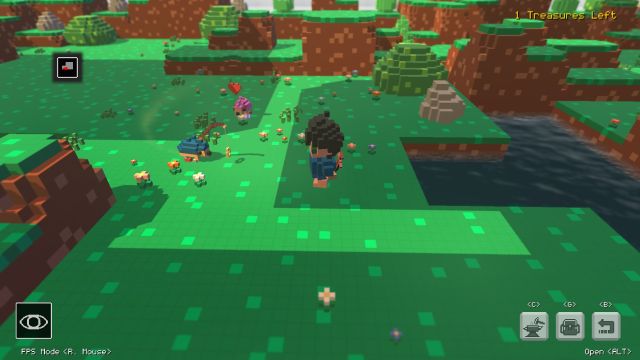 On the flip side, party mechanics remain pretty neat. Each character provides conditions for their recruitment, pretty much all of which don't require much effort. Hell, some even join up for free. You can piece together your team however you want, eject crappy buddies, forge new alliances, and even brave the rougher parts of the world to cheaply join forces with someone whose level is way higher than yours. Then, you can traverse the terrain back to a safer area and watch as your new, overpowered friends reduces the opposition to a smooth jelly. The entire realm stands open to you from the get-go, and the only thing preventing you from reaching its furthest edges of the map is the strength of your squad.

On top of that, each of your associates learns new attack combos as they level up. The game utilizes a combat system similar to Legend of Dragoon, where you hit certain timed prompts when executing a strike. Doing so allows you to continue a sometimes exhausting combination blow that, towards the end of the experience, stomps pretty much any non-boss enemy into the dirt. Of course, even bosses don't stand much of a chance against certain characters. Assassins, for instance, land criticals constantly, and prove invaluable as companions.

Once you've got your ideal alliance, it's time to venture out into the field. At first, the adventuring process can be daunting because this game doesn't offer much of a tutorial. Instead, you must tinker with things yourself and open menus to look for any clues. Thankfully, the game offers enough basic pointers in certain places and simple enough play control that most people should be able to figure this title out with only a tiny bit of effort. 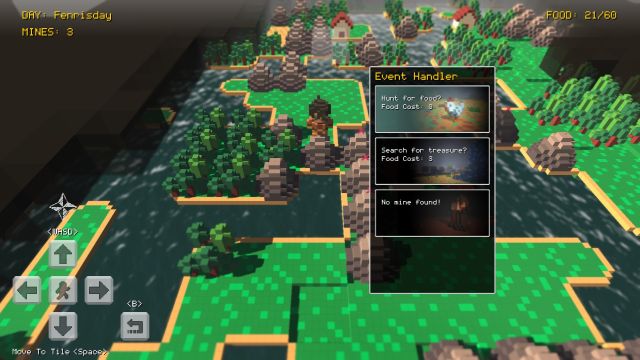 The world map sprawls out in a grid formation, with each square representing a different type of terrain. In order to move one space, you must spend a little of your supply of food. You can gather chow either by spending outrageous prices for it at town shops, or via hunting and fishing. The former of these is pretty simple: you enter any non-watery landscape, toggle first-person mode, and shoot fowl, bunnies, or deer with unlimited arrows until you have enough chunks of meat to cook. Honestly, this feature is only neat for about a session or two, then it becomes a hassle. Gathering food is effortless, and comes across as a needless constraint used to pad out the game's length a tad.

I only tried fishing a couple of times, and found it to be unnecessarily complex and redundant. Honestly, I earned all of the meals I would ever need by shooting cute things and picking berries, so angling for sea life never stuck me as anything more than another extraneous activity unless you planned on capturing Leviathan.

Here's the thing: once you embark on your journey in earnest, the game quickly devolves into a repetitive slog. Citizens of each town offer no additional side quests, so you only obtain the one lofty goal that Burzur gives you. To attain any of the objectives, you'll have to grind for most of the experience. 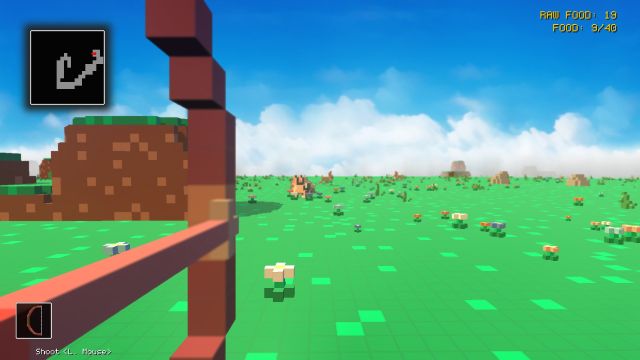 Do you want to take revenge on the one who killed you? Then you're going to need to hit the level cap of 40 and outfit yourself with the best equipment. The latter action requires you to farm materials like crazy and repeatedly craft items until your blacksmith skill is maxed out. In order to accomplish that, you'll need to inspect dozens of individual mountains on the world map to see if you can find an ore vein. Once you do, you must dispatch all of the enemies and the boss (which is just a standard enemy given a meaty stat boost). You then have to wait while the game periodically gives you ore from each mine you've secured. On top of that, you have to be certain you're obtaining the right kinds of ore, because higher level weapons demand that you take over higher level dungeons that are farther away from your starting point.

Do you want to amass riches? You'll need to grind, farm, and sell junk like mad. Do you want to catch Leviathan? Max out your fishing skill. Become a master blacksmith? Max out smithing. I think you see what I'm getting at here. 3D will either prove to be a daunting, tedious task for people who either despise or are indifferent to grinding because the payoff for all of your mind-numbing work is a simple final boss encounter and a single screen ending. For people who enjoy grinding, though, it can provide a few zen-like hours of mindless slaughter and obsessive collecting.

Some folks enjoy putting on a pair of headphones and zoning out while murdering whole hordes of fantasy monsters. Personally, I don't mind doing that occasionally, but I need to be rewarded with substantial content or advancement. 3DRPG doesn't offer that. It peters out at the end, demonstrating that its presentation and party-building concept were its only true strong point. Beyond its cosmetics, it's nothing but another generic roleplaying game with a customizable party.

If you enjoyed this 3DRPG review, you're encouraged to discuss it with the author and with other members of the site's community. If you don't already have an HonestGamers account, you can sign up for one in a snap. Thank you for reading!

© 1998 - 2022 HonestGamers
None of the material contained within this site may be reproduced in any conceivable fashion without permission from the author(s) of said material. This site is not sponsored or endorsed by Nintendo, Sega, Sony, Microsoft, or any other such party. 3DRPG is a registered trademark of its copyright holder. This site makes no claim to 3DRPG, its characters, screenshots, artwork, music, or any intellectual property contained within. Opinions expressed on this site do not necessarily represent the opinion of site staff or sponsors. Staff and freelance reviews are typically written based on time spent with a retail review copy or review key for the game that is provided by its publisher.