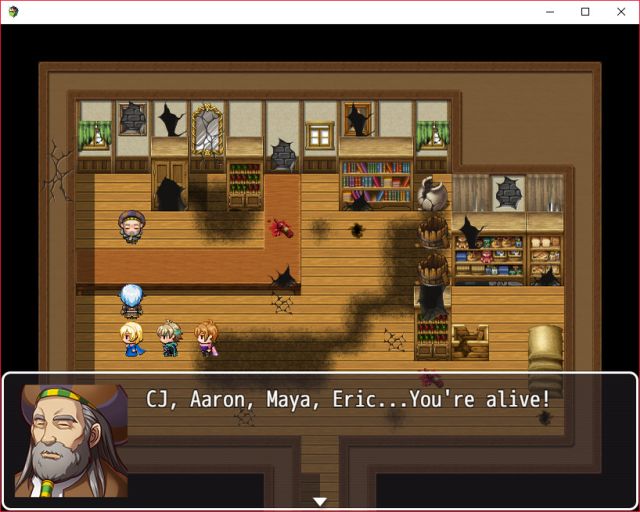 A portion of dialogue from the obscure RPG 7 Pillars states that the number seven "expresses completeness." Ironically, "complete" the last adjective I would associate with this game. For example, you find whole towns that hold maybe one or two citizens, with all of the remaining houses either locked tight or vacant. Yes, even weapon shops and inns in some cities are inaccessible, permanently shut. It's hard to tell if these hovels were left empty to keep things simple or because they were going to be filled at some point.

Sadly, this is only the most obvious case I could offer...

Your adventure begins when your friends wake you up to inform you that your town has been destroyed and all of its citizens are dead. Yes, you somehow slept through a massacre. After a brief chat, you all form a party and venture into the ruined hometown with no dramatic build whatsoever. Your standard, peaceful RPG village theme plays while you mosey past several dead bodies to the only open house in your vicinity. With every step you take, you can't shake the impression that this introduction is terribly abrupt, as if there were plans to expand upon this segment in a later update.

The game's main selling point is that you occasionally make serious choices that alter the experience. The first of these arrives when you have a word with a mortally wounded shopkeeper during the intro. The man tells you that a villain named Ethos has sent out some of her best warriors (called "Pillars") to destroy the world, then instructs you to kill him so you can gain his power. Understandably, your buddies protest because murdering a guy who's currently dying is unnecessary. And if you select the "slay" option, boy, will your friends be a little upset with you! They chide you as if you'd made an off-color joke, and not as if you just horrifically dispatched someone before their eyes. You can't help but chuckle at the inadvertent hilarity. 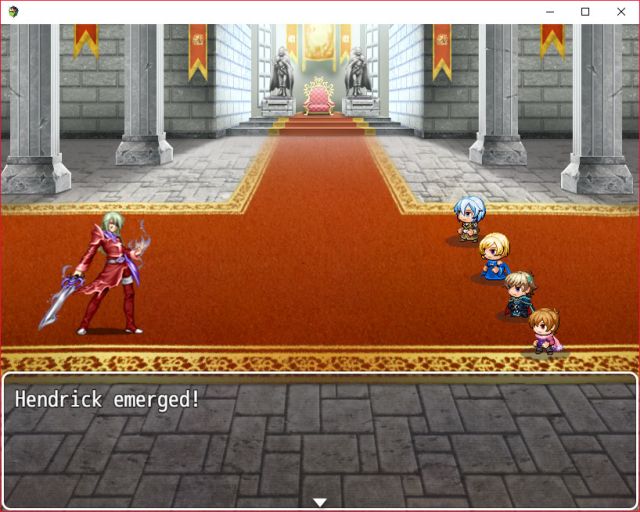 As you progress, you stumble upon more choices. An old woman in the woods tells you to off her so you can also gain her life force. After that, you defeat a boss and can opt to either execute him or let him live. Another boss after that presents the same set of options, as does the boss after that. In fact, most of the decisions you make revolve around killing or not killing someone, and the only alterations these judgment calls make to the campaign are marginal. For instance, some folks give you experience you could easily earn by fighting foes. Some bosses offer goodies if you let them live, but end up challenging you again later on. Hell, one of them attacks you a second time if you don't spare him, and the second battle against him is absolutely identical to the first.

Boss encounters comprise the main plot beats of the first half of the campaign, and the spaces between them are mostly empty pathways. Repeatedly, you enter a dungeon that barely branches, and only sometimes locate a new weapon or a consumable stowed away in a chest. Meanwhile, random encounters crop up, where you vanquish the astounding one enemy type that each area provides. For instance, every battle in the first town pits you against exactly two snakes, and no other adversaries. The same rings true for a forested area right after the town, except there you take on two hornets. Later on, the game decides to change things for a whole one dungeon, where you war with three fire spirits in each encounter.

To make matters worse, every creature is a damage sponge, including the snakes you face at the very beginning. You'll spend numerous rounds picking away at them, wondering when they'll die. Thanks to this setup and the high encounter rate, the quest devolves into such a tedious slog that you can't help but check out while playing. Hell, during my playthrough, I watched videos on my phone while mindless selecting "fight" from the battle menu and sometimes healing. Not that it mattered much, because the game fully healed my warriors between altercations. 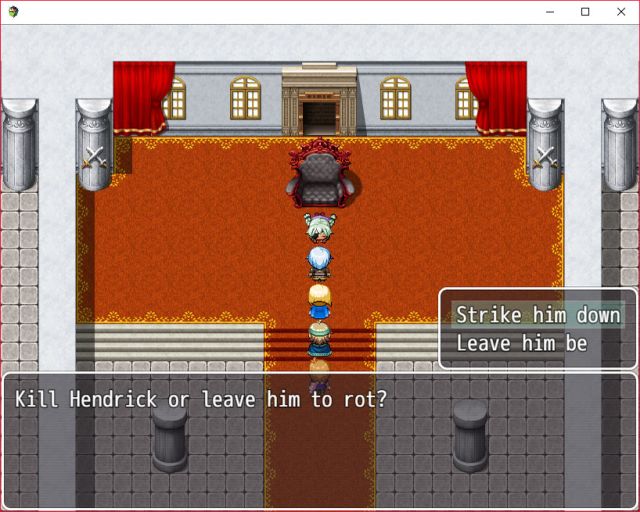 There's no build up at all leading up to each boss, either. You enter their homes, walk straight up to them and start fighting. No chatter, no melodrama; you just amble up to them and beat their faces in. As you might've guessed, these guys also take ages to fell. Regardless, they present no little to no challenge. For the most part, they hit you with one attack, only switching thing up later in the fight. Even then, healing as needed and ordinary strikes prove to be enough to bring them down--and yes, this basic strategy is also effective against the final boss.

Even the environment itself holds half-formed ideas or semi-complete assets. For instance, a volcano stage features fiery ground that apparently damages you, as evidenced by the constantly flickering screen. However, both the status and battle screens confirm that you've sustained no damage, and that the screen flashes for no reason. A couple of other areas allow you to walk through the walls and make your way straight to your objective. Come on, an oversight like this screams "incomplete."

Eventually, the story hits you with a twist, and you realize things aren't as they seem. This revelation is actually kind of neat, but the latter half of the tale is just as hollow as the prior content. Now, instead of focusing solely on Ethos and her minions, you have a new threat to deal with and a new set of goals. Mainly, you need to collect some old relics (with one already in your possession) that are scattered all over the world, but alas, you don't have a ship. 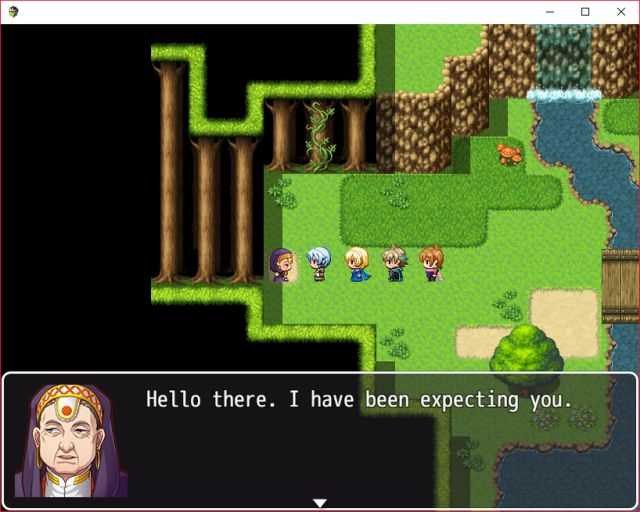 So how do you remedy this problem? By boarding one that's just sitting there and basically stealing it. Again, you get no cutscenes or context explaining why you have a ship now. You just do. Deal with it.

The hunt for the second relic is so asinine that you wonder if the game isn't bugged. There's only one person you can talk to regarding the matter, and chatting with him constantly restarts a brief cutscene that explains the relics' backstory. However, he offers one morsel of information, suggesting you dig in the right place. You pray to any deity that will listen that you won't end up sailing all over the word, walking on literally every square that makes up the planet until you chance upon the second item, the Earth Relic. Unfortunately, that's what happens. Rather than talking to other townsfolk to gather intel, you have to guess your way to the artifact, which is buried at an arbitrary point on the world map.

Look, I'm not going to act like developer Mark Hagan didn't put any effort into 7 Pillars. He put immensely more work into this than I ever did with my never-even-closed-to-finished RPG Maker games. But let's face it: this title is a mere skeleton of an adventure, just begging to be fleshed out. I know a duty like this has to be difficult for one person to undertake, especially since everyday life comes with responsibilities and demands. All the same, I'm not going to pretend this roleplayer isn't a collection of half-formed concepts that might actually be pretty neat if they were fully realized.
1/5

If you enjoyed this 7 Pillars review, you're encouraged to discuss it with the author and with other members of the site's community. If you don't already have an HonestGamers account, you can sign up for one in a snap. Thank you for reading!

© 1998-2020 HonestGamers
None of the material contained within this site may be reproduced in any conceivable fashion without permission from the author(s) of said material. This site is not sponsored or endorsed by Nintendo, Sega, Sony, Microsoft, or any other such party. 7 Pillars is a registered trademark of its copyright holder. This site makes no claim to 7 Pillars, its characters, screenshots, artwork, music, or any intellectual property contained within. Opinions expressed on this site do not necessarily represent the opinion of site staff or sponsors. Staff and freelance reviews are typically written based on time spent with a retail review copy or review key for the game that is provided by its publisher.