Hollow wears its inspirations on its sleeve, not afraid to pay homage to the horror franchises that have shaped its creation. The most obvious of these is Dead Space; both that series and this game isolate you in the depths of space, trapping you in a floating chunk of metal, giving you no means to escape and no means of being rescued. When executed correctly, its a particularly chilling environment to try and survive in. This is embraced fully by Hollow, which forces you to explore a creaking spacecraft surrounded by the drying gore of travellers before you. The station is filled with sounds, little ambient teasers that could be the static fizz of a random monitor or the hiss of a cooling vent. Or a stalking mutant ready to tear your face off.

Done right, lost-in-space horror can be uniquely unsettling, and the first mining ship to take on Jupiter, Shakhter-One, knows how to play on your nerves. Claustrophobic corridors with blind turns drip with faint audio cues that are probably something innocent but might be something murderous. And youre alone, so completely alone, in the cold depths of space, millions upon millions of miles away from anyone who might be able to help you.

Still, just that wasnt enough for developer MMEU, who have spent a bit of time with Silent Hill as well. Shakhter-Ones spooky enough without occasionally shifting into their version of otherworld, dulling the worlds colours and warping its surroundings. These elements, though, arent just slapped together in the hopes of creating something new; theres little standalone moments where Hollow drinks deep from the tainted mindset that made (the early editions of) those games so memorable. Its difficult to tell why the station has become the way it is while controlling a protagonist who becomes more and more unhinged. Its purposefully blurred, hard to tell if the gibbering monsters in the shadows are real. 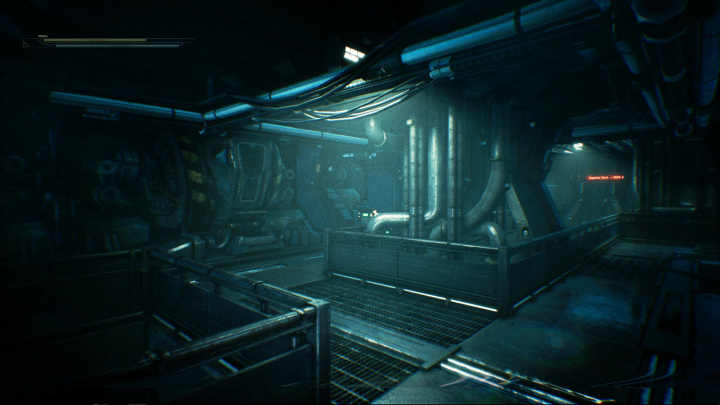 The problem is that these moments are few and far between, which is especially damning in a game with as short a runtime as Hollow. As a result, so much of the game feels condensed; the station hints at being very large, but that translates into passing numerous blocked corridors you cant explore or broken doors you cant open. The linear path available to you is made to feel especially limited when you realise just how much backtracking you need to do, travelling through the same areas multiple times.

The biggest issue here is how everything starts to feel the same. Theres large stretches of Hollow where nothing really happens and youre left to skulk around the stations depths trying to find your next location. Some ways into the game, youre given a weapon and monsters are introduced, but combat is clunky and often feels ineffective and unresponsive. The majority of the game forces you to face off against just one enemy type; a very feminine version of Dead Spaces Necromorph. Like Viscerals homicidal mutants, Hollows all-female horror show cast can have their limbs dissected to lessen their threat, but, in this case, nothing short of a headshot will put them down.

Hollow eventually enters a weird kind of self-contained civil war, seeing if its genuinely creepy and effective atmosphere can hold your interest when faced with the limited tasks and rinse-repeat battles you need to plough through. Occasionally, the game manages to raise the bar a bit; maybe youre stranded on a cargo platform with nowhere to hide and nowhere to run while monsters crawl from the edges to assault you in waves. Then, when you inevitably have to backtrack, you go through the entire sequence again and whatever manic brilliance it once held evaporates under overuse. Finally -- finally -- youll stumble across a second monster type, which is fifteen feet or so of lumbering madness which randomly vomits explosive organs like squelchy mortar shells. Its made very clear your only way to survive is to stick to the shadows and sneak your way through their midst. Right away, Hollow is changed for the better, presenting an issue you cant just mindlessly blast out of your path. Except a scant few rooms later, you find a weapon upgrade that ensures you no longer need to avoid them and can just mindlessly blast them out of your path. 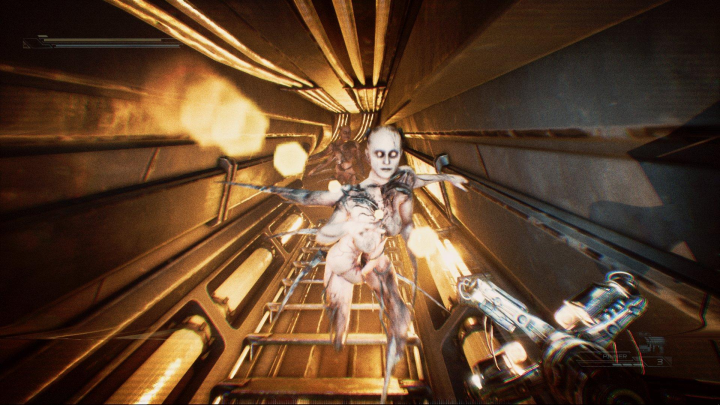 Numerous puzzles bar your way but are either ridiculously easy (like rebooting electronic devices asks you to solve fragment puzzles that are no more complex then pressing left a few times) or revolve around finding notes with codes scrawled on them. Sometimes youll find these notes long before youll need them, and when you come to the point where you need to input them, rather than giving you the option to look at the notes that youve secured on your person, you need to backtrack and find a live console where you can peruse scans of all your discovered documents.

It doesnt help that Hollow lacks a lot of clarity. Not in the good Silent Hill way where youre not allowed to understand the logic behind the macabre tale so you have some logic to ground your fear in and thus lesson in it. Hollow, instead, feels unfocused and unfinished. Large parts of the tale are told through notes you find littered around the station and, even if you collect all of these, it always feels like theres holes in the tale, perhaps things missed during exploration. Neither of the games two endings shed a lot of light on this, explained, perhaps, but the immediate pledge that youll perhaps learn more of the story in Hollow 2.

Perhaps thats the best Hollow can hope for; to be a solid starting point for a better fleshed-out game. Confined to just wandering around a space station designed to freak you out, Hollow often feels peerless, nailing every little audio fizzle or creak to play against your nerves. Although it tries, though, it never has the pedigree to build upon this and offer a significant or varied enough threat to build upon such solid foundations. As is, it doesn't quite offer enough to cushion Visceral's untimely demise. Theres not enough here to crown a new sci-fi horror kingpin, but perhaps theres some seeds of hope.
3/5

If you enjoyed this Hollow review, you're encouraged to discuss it with the author and with other members of the site's community. If you don't already have an HonestGamers account, you can sign up for one in a snap. Thank you for reading!

© 1998-2020 HonestGamers
None of the material contained within this site may be reproduced in any conceivable fashion without permission from the author(s) of said material. This site is not sponsored or endorsed by Nintendo, Sega, Sony, Microsoft, or any other such party. Hollow is a registered trademark of its copyright holder. This site makes no claim to Hollow, its characters, screenshots, artwork, music, or any intellectual property contained within. Opinions expressed on this site do not necessarily represent the opinion of site staff or sponsors. Staff and freelance reviews are typically written based on time spent with a retail review copy or review key for the game that is provided by its publisher.