I played Omega Labyrinth Life for more than 40 hours before noticing that shadows in the garden slowly shift and lengthen throughout the day as evening approaches. I'm not sure how I missed that particular detail except that the effect is subtle. Also, I was probably busy contemplating the jiggling boobs. Those are a perfect distraction for a simple mind like mine. But whatever. I already have more to say about this surprisingly great and sometimes complex game than a brief review permits, so I should get right to it.

Omega Labyrinth Life is a roguelike from Matrix. The studio previously developed Alundra, Final Fantasy: 4 Heroes of Light and Nostalgia, among other highly regarded RPGs. A portion of that talented team has devoted several of the last few years to the Omega Labyrinth series for D3 Publisher. Traditionally exclusive to Sony hardware and unavailable in the west despite a scuttled attempt with the second installment, the franchise finally expanded to Nintendo hardware in time for round three. On the PlayStation 4, a cheaper and less risque version is also available as Labyrinth Life. 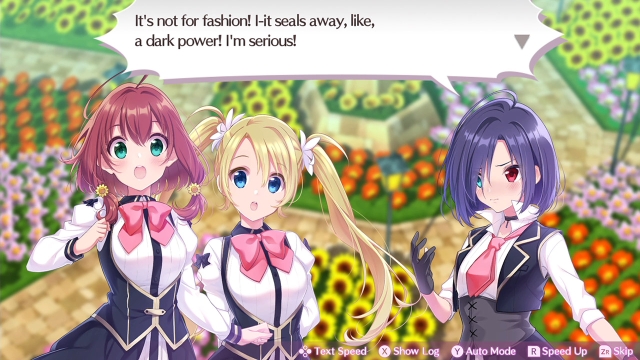 A fairly traditional roguelike (in many ways), Omega Labyrinth Life throws the player at randomly-generated dungeons full of monsters. These denizens of darkness serve an unknown entity that wilted the flowers at the local academy garden. The event is a bigger deal than you might suppose, since those fragrant plants are the pride of pupils and faculty alike. They represent the very health of the institution. The calamity occurs just as the heroine, a transfer student named Hinata, arrives on the deflowered premises. She works quickly to clear her name, and the other girls go from suspicious strangers to close friends even as conditions otherwise worsen.

The garden area I mentioned serves as a convenient hub. You can do a little planting, talk to the other characters, purchase seeds and engage in various activities to prepare yourself for another adventure. New diversions are introduced slowly over the first few hours of play but are easily ignored because they don't seem to directly impact dungeon exploration. However, those first few dungeons are basically just interesting tutorials. It's important to remember that the going will get tougher. 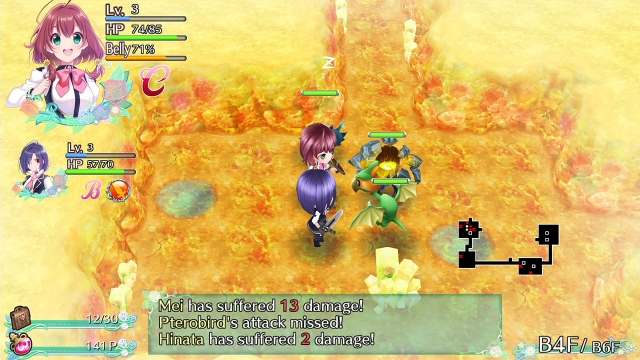 Inside the dungeons, you control one girl at a time. You can bring along a single partner and instantly switch between the two characters, provided they are positioned close enough to one another. Otherwise, most actions you might utilize--including taking a step or using an item or swinging your weapon at a foe--require a single turn. You'll quickly burn through many turns while exploring, but you should proceed with due caution when a threat is near or you might get killed. If your primary character expires, she is typically booted back to the garden without any weapons she had equipped and with no loot. It's a steep penalty. Fortunately, some items let you escape when things get hairy, or even (less commonly) keep everything in spite of your failure.

Much of the difficulty I encountered when playing the game came from the fact that if an enemy kills your traveling partner, it suddenly becomes a great deal more powerful as a reward for that nefarious deed. Powerful enough, in fact, to kill you with one hit. This dynamic in particular forces you to pay close attention to both girls as you explore, but that's not all. On some floors, another girl from the academy wanders around. If she kills beasts, you benefit. If the monsters best her or even each otehr, they gain the same boost they would if they took out your companion. It's important to pay attention to the on-screen log and map at all times so you can anticipate any impending issues. Otherwise, you might make it deep into a dungeon run, only to find you have to leave just before claiming victory or risk losing essential gear. 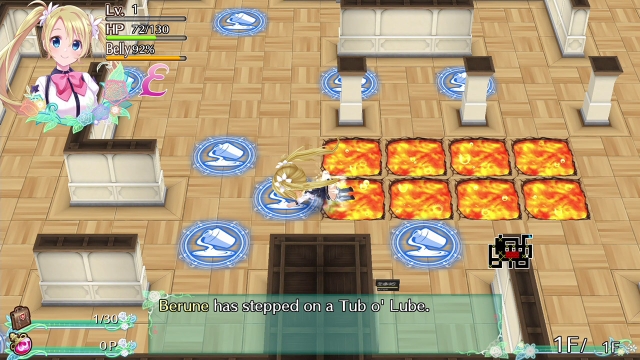 As I noted, many of the game's core systems and design elements are fairly traditional. I would detail more of them, but I need to focus on three particularly noteworthy areas: skill and weapon customization, gardening and fan service.

Skill customization quickly proves vital. Each girl eventually learns and strengthens several active and passive skills. Hinata, for instance, gains the ability to deal hefty damage to nearby enemies, or to heal and buff herself and her partner. By enhancing her skills, she can use them more frequently while exploring dungeons. Her passive stat boosts also improve. To remain dominant, she must complete special training events.

Weapon customization allows players to enhance gear they purchase or find in dungeons. Duplicate weapons can be combined until they reach their maximum rating. They might also be imbued with special abilities, such as STR+25 or Dead Aim. The latter makes it impossible to miss when swiping at most targets. There are all sorts of abilities, so you must choose carefully. You only have a few slots on each equipment type and dungeons are ludicrously inhospitable if you aren't prepared. It might not sound like so much, but gear tweaks became my addiction. I loved building Hinata into a warrior who could float over traps, block thieving monsters, land a critical hit that couldn't miss every time she swung her mallet, and render null the most devastating special attacks her enemies possessed. That growth was satisfying in the extreme. 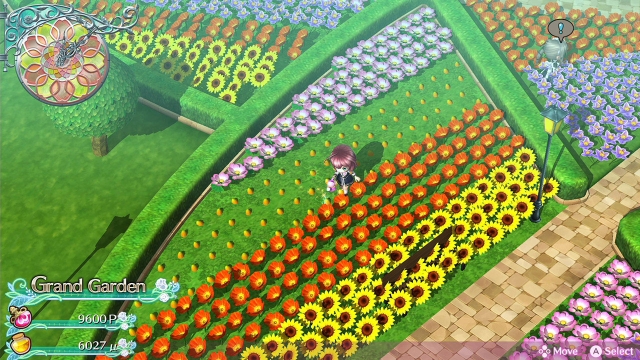 Gardening is worthwhile primarily as a means to earn the nectar and seeds you need in order to make skill and weapon improvements. As the game's campaign progresses, you gain access to additional flower beds and varieties. You must routinely plant, water and harvest. It's not a tremendously exciting system by itself. Maintenance between each dungeon run does become somewhat rote, but there are useful shortcuts. It's also fun to figure out what plants respond best to which fertilizer. Since I was well compensated, I didn't mind proving I have a virtual green thumb even when I'm not playing Harvest Moon.

Omega Labyrinth Life is certainly no Harvest Moon, though. That's never more obvious than when the fan service makes appearances, which is often. Omega Labyrinth Z was canceled ahead of its planned release in North America because Sony decided to impose stricter rules on sexual content. That prior game would have been rated M, and if this follow-up is anything to go by, I know why. There's more lewd content here than I can recall ever seeing on consoles and the lack of full-on nudity doesn't prevent effective titillation. I feel the game ultimately benefits from that adult-oriented content, but many parents may not agree. Know this: "M for Mature" isn't just for show. 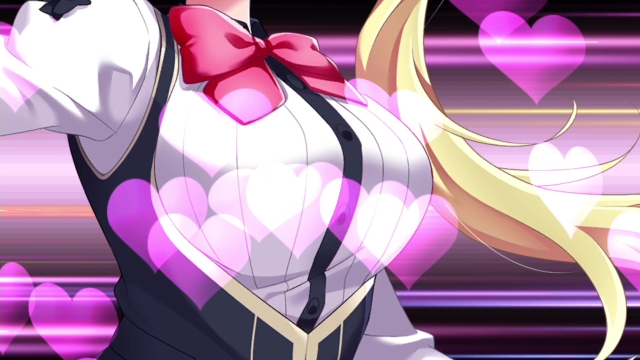 The fan service truly is persistent. As your characters explore dungeons, they slay enemies and acquire "omega" points that increase their bust size. The bigger their breasts, the more effective the girls are in battle. They gain additional skill uses and sometimes temporarily enhanced stats. Characters also find hot springs, where the lead party member can take a bath for temporary benefits. Steam covers only the most private of crevices and pointy bits on the nubile heroines. Pressing a button produces a cursor if you play the game while docked, which allows you to prod the breasts and watch them sway. In handheld mode, your finger does the work. Elsewhere, you may find flower petals that initiate a round of "Tit-for-Tat" with an elemental entity, which is basically just a rock/paper/scissors match. If you win or tie, you'll double (or more) your haul upon clearing a dungeon. It's boobs against boobs!

Back in the garden, things get down and dirty. In the groping mini-game you play to learn and enhance abilities, the girl strikes a pose and lets you fiddle with her boobs, thighs and buttocks. You nudge various zones on her body to arouse her interest and determine what does the most good. She lets you know what's working by making innuendo-fueled comments related to the visual theme. Then a flower blooms and you go crazy tapping the screen or mashing a button, which sends flower petals flying and leaves your target's outfit in tatters. When she can take no more, a liquid explosion drenches the screen. The girl expresses her mingled satisfaction and embarrassment as bottles fill with a pink liquid. Weary of the mini-game? You can skip straight to your reward, if you don't mind a slight decrease in the rewards offered and find the whole deal somewhat unseemly.

Omega Labyrinth Life offers a satisfying, meaty roguelike experience for a fairly specific audience, thanks to addictive character and weapon customization and the under-pining systems, to say nothing of fan service that routinely pushes the M-rated envelope. If you're good with both the game's depth and its thoroughly lewd heart, it's one of the best investments you might hope to make and does justify the premium price point. But if you're sick of dungeons or if the thought of jiggling anime bosoms makes you squirm, steer clear.
4.5/5

If you enjoyed this Omega Labyrinth Life review, you're encouraged to discuss it with the author and with other members of the site's community. If you don't already have an HonestGamers account, you can sign up for one in a snap. Thank you for reading!

© 1998-2020 HonestGamers
None of the material contained within this site may be reproduced in any conceivable fashion without permission from the author(s) of said material. This site is not sponsored or endorsed by Nintendo, Sega, Sony, Microsoft, or any other such party. Omega Labyrinth Life is a registered trademark of its copyright holder. This site makes no claim to Omega Labyrinth Life, its characters, screenshots, artwork, music, or any intellectual property contained within. Opinions expressed on this site do not necessarily represent the opinion of site staff or sponsors. Staff and freelance reviews are typically written based on time spent with a retail review copy or review key for the game that is provided by its publisher.