Once upon a Monday, dreary, as I browsd through game pass, weary, scouring for a game with guns and guts and gore. Suddenly there came a game, promising all the above and more. Tis that game with the ridiculous aspect ratio, I said. Only this, and nothing more.

Quoth my Xbox: Are you sure?

As Ive mentioned before, when I choose to spew my thoughts into the void about a game, I do it based on how profound an impression it left on me. Theres no point talking about a game I dont feel passionate about - for better or worse - and The Evil Within is possibly the first game to give me a profound feeling of Wow. Ive never seen such a gulf of quality between the start and end before. This isnt even a case like Max Payne, where I loved it in spite of massive technical issues: this is a unique case of a game thats just about kept me with it, and stumbled all the way to the finish line, all of its good ideas weighed down with clumsy execution and the curse of one of the worst consoles in living memory. Bear with me, folks. This isnt going to be kind. 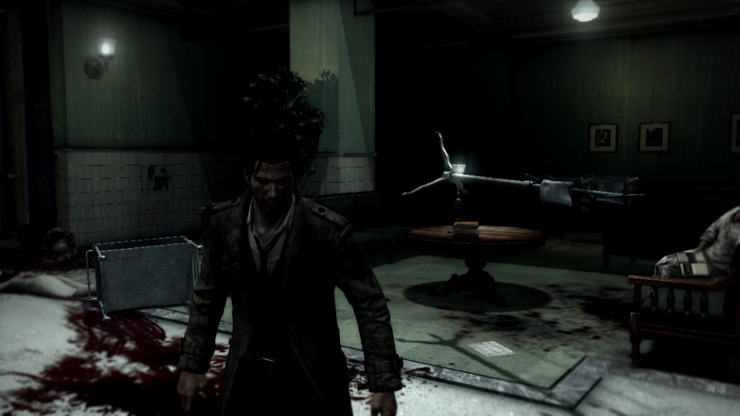 As the gothic poetry at the start alluded to, its not like I wasnt expecting this game to be rough around the edges, but it turns out, elucidating on the myriad issues this game has, would be a more difficult task than I expected. Make no mistake, theres a good game here trying to get out, but its trying to get out from a collapsed and burning building. Lets start with the most obvious problem, then - the one that the games most known for - That aspect ratio. Thankfully, at some point between 2014 and now, they put out a patch that allowed people to play that game in a 1.78:1 aspect ratio, but the letterboxing option is still there, and enabled by default. It might not be such an issue if the option put the game into a true 2.35:1 ratio, so that all the PC players with ultrawide monitors could enjoy it, but thats not the case, either. Instead, the game renders in a 1:78:1 ratio, and adds the ugly black bars after the fact, meaning that, instead of gaining more image horizontally, you lose about 30 percent of the image on the vertical axis, with no horizontal benefit. Its a truly woeful idea that harms the experience, and how anybody thought it would be a good idea eludes me. However, thats now optional. What isnt optional is the truly abysmal graphics and performance.

Simply put, theres no way a game that looks this bad should run this poorly. Through the entire run, its impossible to decide which is worse: the pathologically unstable framerate, or the downright gross graphics. Lets deal with the latter first. From the moment you start the game, youll find that something here is desperately wrong. Throughout the first level, I couldnt find a single high-resolution texture, shadows look like theyve been rendered at a whole 240P, low-poly props and environment elements are everywhere, and woe betide you if you decide to look at anything that isnt completely vertical or horizontal, lest you slice your thumbs off on the jaggies. Its not like they didnt try to hide it, either, because the entire image has either been artificially and extensively softened, or soaked in so much antialiasing as to make it look like Ive downed an entire bottle of vodka. All in service of hiding a straight up 720p presentation. Theres also a pervasive lighting problem, in that the games idea of darkness and shadow is about as nuanced as a Michael Bay movie. Even on an OLED screen, I found that the suggested, default level of brightness left vast sections of the screen completely black. Fixing this required me to ramp the brightness up to near maximum, which simply obliterated any shadow detail, and arguably ruined the atmosphere. Even in relatively well lit areas, places where light sources, such as your lantern overlap, cause a hideous overexposure effect, as if instead of the light sources blending together, they simply stack. Its like they looked at Oblivion lighting and said that. Make it look like THAT. 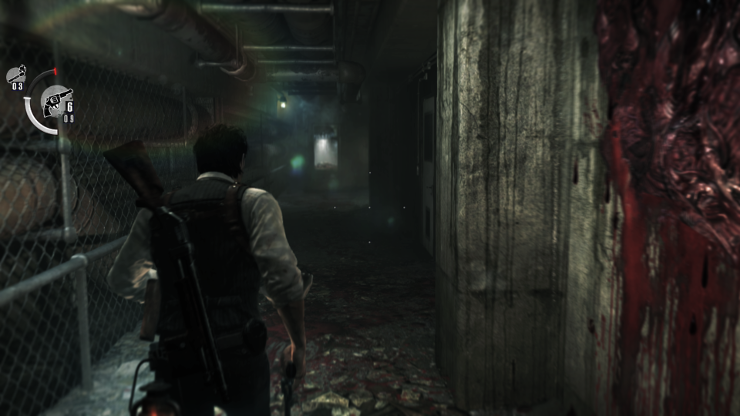 And then, theres the performance. Insert image of disgusted anime girl here. Let it henceforth be known that Im entirely in favour of capping the framerate at 30 fps in order to ensure a more consistent experience, or to enable greater visual fidelity. Ive played numerous games at 30fps and had a fantastic time, but The Evil Within cant even assure you of that. Both frame rate and pacing are wonky and theres nothing you can do about it. This means that gameplay constantly feels like the console is constantly about to buckle under the stress. Please, Microsoft, put this on your FPS Boost program, sharpish. Its not like theres very time-sensitive bomb defusing segments in this game or anything.

With the graphics and performance thoroughly skewered, its time to move on to the actual gameplay, where The Evil Within fights tooth and nail against itself to come out on top. Mechanically, its nothing new, to the point of annoyance: you go round spooky areas with a barely competent pistol and a melee about as powerful as a knock-knock joke, and have to evade or fight legally-distinct-from-zombies, whilst slowly amassing an arsenal, juggling scarce ammunition, becoming stronger, and occasionally manually saving in safe areas. This is all very familiar. Even the games title alludes to this: The Evil Within, implying that the evil stays in somebody, long term, living there. Like a resident. An evil resident. Its really not hard to work out what niche The Evil Within is trying to fill, and I can imagine that in 2014, people were clamouring to have their niches filled hard. Comparisons to a once-disgraced franchise aside, The Evil Within does actually manage to bring some good ideas to the table, chief of which, I think, is the blissful lack of inventory tetris, but a close second is the agony crossbow. Using components found as pickups and in traps that you dismantle as craftable ammunition, a player can feel somewhat safe, knowing that at any given time, they have the games BFG bound to a d-pad shortcut. Its a powerful, versatile weapon, and the games surprisingly in-depth upgrade system allows you to make it even more devastating. This ties in to another of the games improvements to the formula, in the way it handles safe rooms. Denoted by a distinctive door and a pleasant melody, the player is transported to the crumbling and decaying Beacon Mental Hospital, where keys found in game can be exchanged for powerful items, and a gruesome machine grants you upgrades in exchange for green goo you find on your travels. I recommend maxing out the pistol, harpoon bolts, health and melee. Youll thank me later. Finally, most enemies wont stay down unless you blow their head off, but the game gives you matches and occasionally, vicious melee weapons which can be used to get around this. Its a nice addition, and keeps you on your toes. Also, it lets you stomp on corpses like Dead Space, and any game that lets you do that automatically gets bonus points. 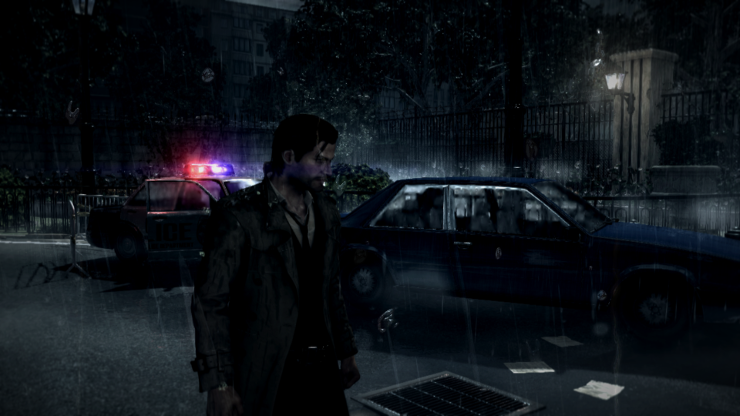 The levels also exhibit a vast gulf in quality between utterly diabolical and rock solid, with the opening level being without a doubt the worst. Its a real shame, because once the game finally settles into its groove, some five hours in, the flow of the levels, combat, and environments just gets better. What doesnt get better at any point, though, is the story. No matter how elaborate a house of horrors the game takes you through, the story actively works against the scares by being completely incomprehensible. The main gist of it is that a super edgy looking hooded guy called Ruvik wants to Kill a pasty teenager called Leslie because hes able to break people out of some kind of hivemind Inception machine where he holds power. At least, I think thats what it was. It was hard to make out when Ruviks appearances were scattered through the game seemingly at random, and the connection between events, locations and character motivations changed like the winds. Boss fights, however, were pretty much universally great. From a ghost spider lady who crawls out of corpses to huge Kronenberg creatures, the boss fights are consistently fun and challenging, though I feel that Ive seen a lot of it before. And really, thats perhaps one of the most damning things about The Evil Within: Ive seen it all before.

For comparison, Outlast released the year before, and both looked and performed better, but it also got me intimately familiar with yon shady asylum. Now, years on from that, Ive played Resident Evil 7, Little nightmares, SOMA, PT, Dead Space, all of which presented ideas that were both newer and more interesting than what The Evil Within has to offer. Its not like The Evil Within doesnt try its hardest to make what it has work, but its clear that in its apparently singular drive to fill the void left by Resident Evil, it leaves little room to transform into its own intricately patterned moth. In 2014, people might have been more forgiving, just so that they could get their fix of that specific formula, but in 2021, The Evil Within comes up woefully short. Nonetheless, I had a good time with it, or, at least, a good enough time for me to spare it the fire and brimstone I reserve for something truly awful. The traps you face across the game make for a nice twist, the shotgun is meaty, environments are varied, if not cliche, Sebastian is decent protagonist, and for as terrible as the default control scheme is, at least you can change it. Its not a standout title, and not one Id recommend without a big fat asterisk, but its good enough, and if youre a far greater Resident Evil fan than I, then its certainly worth looking into, at least. If nothing else, I feel compelled to check out The Evil Within 2.

Now, if youll excuse me, I have a hopefully better sequel to purchase.

If you enjoyed this The Evil Within review, you're encouraged to discuss it with the author and with other members of the site's community. If you don't already have an HonestGamers account, you can sign up for one in a snap. Thank you for reading!

© 1998 - 2022 HonestGamers
None of the material contained within this site may be reproduced in any conceivable fashion without permission from the author(s) of said material. This site is not sponsored or endorsed by Nintendo, Sega, Sony, Microsoft, or any other such party. The Evil Within is a registered trademark of its copyright holder. This site makes no claim to The Evil Within, its characters, screenshots, artwork, music, or any intellectual property contained within. Opinions expressed on this site do not necessarily represent the opinion of site staff or sponsors. Staff and freelance reviews are typically written based on time spent with a retail review copy or review key for the game that is provided by its publisher.