Excuse me while I don my haughty professor hat and lecture y'all. Ahem... Due to Nintendo bursting onto the console scene with Super Mario Bros, the platformer genre dominated the console environment throughout the late 80s and early 90s. The genre later faded to the background due to the advent of 3D, but the era of indies and downloadable games revived interest in the genre in the 21st century. With it, 2D platformers expanded in various forms. Precision platformers, for example, created a series of short, distinct challenges, while atmospheric platformers aimed to provoke emotions or tell a story through the environment and level design. With the advent of smartphones in the 2010s, a new subgenre emerged: the mobile platformer, and many games of said genre also migrated to PCs and the Switch. Yet, unlike the other new subgenres, it is hard to see how this new design intended for mobile phones advanced the platforming world as a whole. Let us look at Dadish as an example.

Dadish tells the story of a radish dad (duh...) whose 50 kids have all ran away. So the dad has to go through 50 different levels to find them all, levels full of spikes and pits and fast-food themed enemies (I guess, since he's a healthy vegetable, it kinda makes sense?). Each level is short, perhaps taking a minute or two at most, and ends with a cute little dialogue between the dad and one of his kids. Dadish himself can only move and jump: no variable speed run, no crouching, no sliding, no dash, no wall jump, no combat. Levels are almost completely linear, and only rarely have the most basic of puzzles. In addition to making it to the end and finding your kid, you can optionally find a hidden star that might require an extra platforming challenge or perhaps some minor exploring. Every 10 levels is a boss, naturally, which is a giant fast food character that you must defeat by using various elements of the environment (pressing a switch to reveal spikes or whatever). 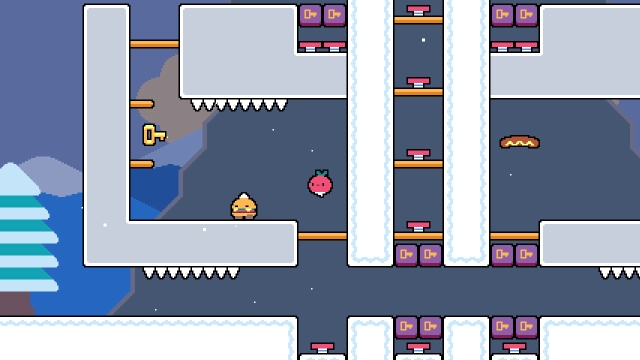 That description alone describes the problem perfectly. It all sounds so simple, and it is. Everything about it screams that it was made for mobile phones, a platform not at all suited to traditional console gaming. You can't have complex controls with a touch screen, so we just move and jump. You can't have long levels when people perhaps only have a minute or two to play while waiting for someone or whatever. You can't have challenge when people are only looking to waste time. This all makes perfect sense for that environment. But when you place it against Mario or Meat Boy or Metroid? What does it have to offer to compete with the variety you get there? Sure, you have a price difference (technically $10, but it's on sale for $2 constantly) which puts it squarely in impulse buy territory. And it's short enough that you aren't investing much time in it either. And how much of an incentive is it to buy a game when the best thing it has going for it is that it isn't a big investment?

But honestly, that's not very fair to Dadish, because, despite its limitations, there's plenty of heart here. Yes, it has that very blocky , simplistic look often found in the mobile world, but it's very clean, y'know? Yes, it's just a simple double jump, but the distance of the jumps still feel natural. And it's got a goofy sense of humor with its jumping pizzas and and sarcastic radish kids and random screeching possums for no reason. So ignoring the simplicity, the basics are there. And honestly, it goes beyone the basics, as the level design, for all its simplicity, is also pretty solid for what it is.

Sure, it starts out simple; the first world (which, admittedly, is 20% of the game) will only put you up against casual challenges like jumping over a singular enemy or introducing you to a new element like falling blocks or whatever. But eventually, you start navigating windmills of spiky doom or coming up against a line of cannons each firing in a perfect rhythm. But again, that's just one element at a time. By the end of the game, you are up climbing up and down spike-filled staircases by bouncing on floating balloons that pop when you touch them and simultaneously dodging cannons, whirling blades, and hot dogs that are tumbling down the staircase at the same rate you are. Sure, we have to keep in mind that this isn't Meat Boy; it doesn't require a complex series of inputs at just the right time. It's challenging, but only with respect to the structure. But it creates enough illusion of danger, that it still feels like an accomplishment when you complete it (and you will still die fairly often in the end). And some levels are designed to just feel satisfying to complete. For example, you need to go back and forth from the center column collecting keys to keep opening new gates until you can finally unlock the center column, which launches you upward with a slew of trampolines at breakneck speeds until you you meet your kid. It reminds me a bit of the early Chip's Challenge levels, where simply going through the motions of slowly unlocking stuff felt satisfying.

In other words, it acheives its objective of holding your attention while wasting your time.

It's hard to say if that's a good thing or a bad thing. I mean, Dadish is a big fish in a small pond; it's an excellent mobile platformer, but at the end of the day it's still a mobile platformer. It's short, it's cheap, it has a clever premise, some funny writing, and pretty solid level design. That's all great! But it's also simplistic and easy and low budget and can't really create any truly memorable moments. I guess I did enjoy my time with it well enough. But despite that, I can't help but feel that maybe this subgenre should have stayed imprisoned on phones where it belongs instead of trying to play with the big boys.

If you enjoyed this Dadish review, you're encouraged to discuss it with the author and with other members of the site's community. If you don't already have an HonestGamers account, you can sign up for one in a snap. Thank you for reading!

© 1998-2021 HonestGamers
None of the material contained within this site may be reproduced in any conceivable fashion without permission from the author(s) of said material. This site is not sponsored or endorsed by Nintendo, Sega, Sony, Microsoft, or any other such party. Dadish is a registered trademark of its copyright holder. This site makes no claim to Dadish, its characters, screenshots, artwork, music, or any intellectual property contained within. Opinions expressed on this site do not necessarily represent the opinion of site staff or sponsors. Staff and freelance reviews are typically written based on time spent with a retail review copy or review key for the game that is provided by its publisher.