The Neptunia franchise, now almost nine years old, is expanding with a new installment that's different from anything its predecessors offered. Nep and her friends, recurring characters from past titles, are back for the new adventure. For this spin-off, publisher Idea Factory partnered with a western team, Artisan Studios, to bring side-scrolling action to the familiar RPG domain.

Super Neptunia RPG takes place in a world where 2D games are considered supreme by an organization called Bombyx Mori. Citizens are forced to pay taxes with game cartridges, and anyone who attempts to use new technologies or create games that dont meet the accepted standards is sent to the Trial Grounds to be rehabilitated. The protagonist in this tale, Neptune, wakes up in bed unable to remember anything but her name. She is immediately recruited by a secret police force that works for Bombyx Mori. Eventually, Neptune meets a mysterious woman named Chrome, who seems to know everything about her past but refuses to reveal how or why. Chrome urges the heroine to find allies: Noire, Blanc and Vert (the franchise staples). Her friends each are suffering from amnesia, as well, so the party members set off to find out who they are by decrypting information gleaned from the mysterious talking book, Historie. 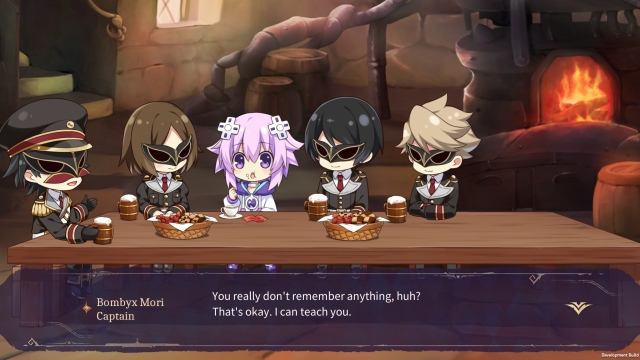 For this newest outing, the franchise deviates from the turn-based combat for which it is known. What you'll find instead is more like something from the Valkyrie Profile games. An Active Time Battle system is employed, wherein you wait for a gauge to fill up so you can spend ability points to perform actions. This process can grow a little tedious, but thankfully there is an option to speed up the combat if you dont feel like waiting. The action gauge is shared by all party members, so you need to spend your ability points wisely. The partys actions are dependent on where they are placed within the party formation, which you can modify by tapping the shoulder buttons. Skills all fall within elemental classes that increase or decrease the effectiveness of your attacks on foes. In the worst-case scenario, your attacks might even be absorbed by and heal the enemy. You can view elemental information by pausing the action mid-battle to conduct a little research.

Later in the game, two additional mechanics are introduced: Break Attack and HDD Form. The former allows a selected character to perform a special, powerful strike when one bar of the Break gauge is filled. However, the gauge takes too long to fill, which means the system is only helpful during lengthy battles and/or against more powerful adversaries. HDD Form allows Neptune, Noire, Blanc and Vert to transform to their true forms, something they've been able to do in the Neptunia series since the very beginning. You must wait for the HDD gauge to fill before you can transform and wield more power in battle. It feels a bit like switching party members in the middle of everything. 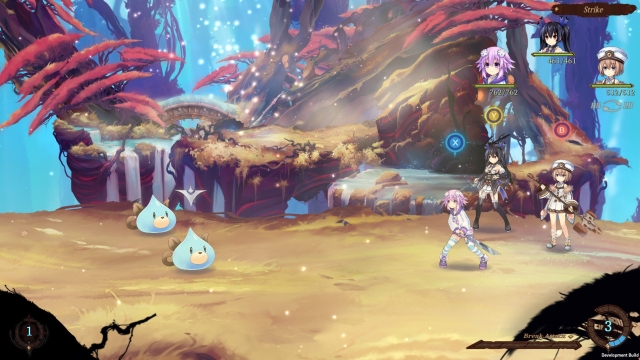 Dungeons feature visible enemies and some basic platforming sections. Navigating them doesnt require much skill. You control Neptune in these segments. She can walk, dash or land a surprise attack on an enemy to gain the upper hand in the ensuing battle. Unfortunately, a slight graphical stutter occurs periodically, as Neptune explores and transitions between movement types. This delay can pose a problem when you're trying to avoid an enemy encounter and wind up fighting monsters instead of avoiding them. Luckily, an available dungeon map that indicates enemies' presence, quest marks, save points, entrances, and exits makes it easier to plan ahead as you go about your business.

Super Neptunia RPG does include some interface issues and features I find counter-intuitive. Quests don't let you know once you've completed certain related tasks, which is a problem when there are so many of them available. If you want to revisit the tutorial, you can't do so from a menu but instead must head back to town. That's a hassle when you just want a quick reminder about the elemental class system. The dungeon map doesnt tell you what locations you are heading to, either, so you have to remember your destination by heart. Thankfully, once you visited a location before, you can fast-travel there without having to go through the dungeons again to find it. 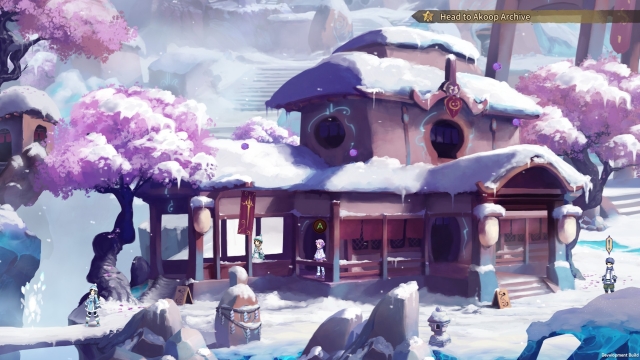 There is little challenge to Super Neptunia RPG overall, and progression is quite easy with a few exceptions. Though sometimes the best approach is to find the right skills and strategies to beat the bosses, as you might expect, there are other instances when you'll have the best chance button mashing and hoping for the desired outcome. So many things happen at once in some cases that it can be a little frustrating and confusing.

Once you do finish the campaign, you can complete any side quests you didn't get around to clearing, and unlock some endgame hunt quests that shouldn't prove all that difficult. There is an extra fan service scene available once you complete the game, but otherwise little is offered in the way of rewards that might tempt a person to keep playing.

Despite the occasional shortcoming, it seems quite a lot of effort was put into Super Neptunia RPG compared to its predecessors. The animation of the lead characters, NPCs and monsters is much more expressive than usual. Environments are beautifully drawn, in a way that evokes a feeling of life within them. The writing captures the personalities of the main cast, featuring more of the same old meta-jokes and gaming references while doing a better job of integrating them into the overall plot. That story is well-paced and doesnt require knowledge of the events in previous installments. Whether you want to try your hand at a lighthearted, side-scrolling RPG or finally get acquainted with the Neptunia series, you'll do just fine here.
3.5/5

If you enjoyed this Super Neptunia RPG review, you're encouraged to discuss it with the author and with other members of the site's community. If you don't already have an HonestGamers account, you can sign up for one in a snap. Thank you for reading!

© 1998-2020 HonestGamers
None of the material contained within this site may be reproduced in any conceivable fashion without permission from the author(s) of said material. This site is not sponsored or endorsed by Nintendo, Sega, Sony, Microsoft, or any other such party. Super Neptunia RPG is a registered trademark of its copyright holder. This site makes no claim to Super Neptunia RPG, its characters, screenshots, artwork, music, or any intellectual property contained within. Opinions expressed on this site do not necessarily represent the opinion of site staff or sponsors. Staff and freelance reviews are typically written based on time spent with a retail review copy or review key for the game that is provided by its publisher.