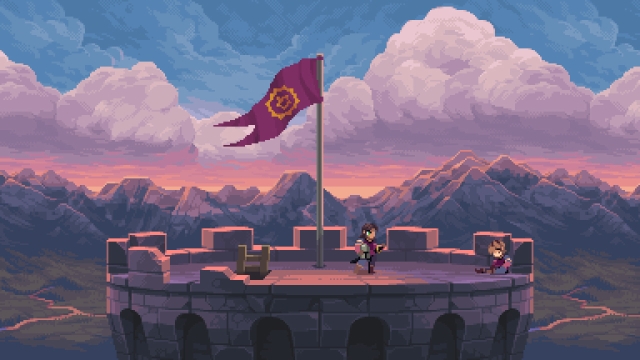 I'm going to throw a couple of terms out there, and if you cringe at either of them, then avoid Chasm:

Yes, this title is a procedurally generated pathfinder that doesn't even try to hide its resemblance to Castlevania: Symphony of the Night. It handles quite the same, utilizes enemy and weapon types similar to its inspiration, and even features familiars you can summon. For instance, you can summon a sword that flies around you and slashes foes. Huh, where have I seen one of those before? Unlike Symphony, though, this Metroid descendant randomizes its map layout each time you fire up a new game. Individual rooms remain from prior quests, but their connection to one another shuffles depending upon the seed you draw.

Of course, if you enjoyed a certain layout, you could always write the seed down and input it whenever you begin the experience anew. But what's the fun in that? Unlike many other pathfinders, I find myself more likely to replay this one only so I can check out a different configuration and not feel like I'm just romping through a familiar rigmarole.

Here, you venture to a small mining village at the request of your commander. It turns out everyone there has vanished into the mine, which is now teeming with monsters. So what else are you supposed to do except embark on the age old quest of searching rooms until you run into a roadblock, only to return after you've secured an item that begets a new ability allowing you to pass that obstacle? For instance, you might run afoul of a huge wall with notches carved into the side. That only presents an issue when you don't possess a grasping claw that allows you to cling to ledges and scores like the ones you see in the wall before you. 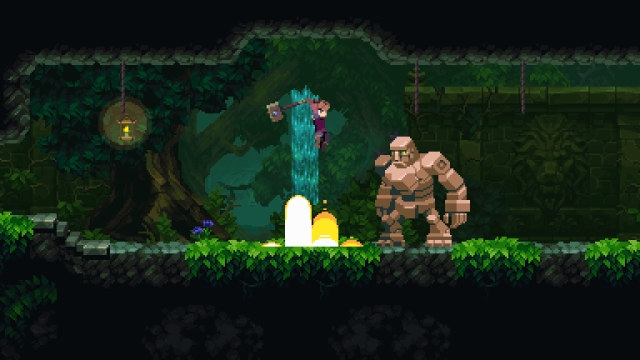 As you advance, you find all the usual gadgets. One allows you to double jump, and another (a parachute) lets you glide downward, a la Princess Peach. There's even an artifact that illuminates the darkness, plus one that translates old texts for you so can piece together some of the game's backstory or uncover helpful clues to solve puzzles.

Unfortunately, the collection of helpful items also represents one of Chasm's issues. Mainly, the claw used to grab onto ledges functions oddly and doesn't mesh well with some of its brethren. At times it fails to latch onto edges, leaving you to fall--and sometimes from great heights. Thankfully that snag (or lack thereof?) doesn't crop up frequently. Also, the claw doesn't work in concert with the aforementioned parachute. The former refuses engage while the latter is in use. At that point, you must awkwardly release the 'chute moments before hitting a portion of a wall you can hold. Roughly half of the time, you end up missing your target and plummeting. Thankfully, you don't bump into many segments that require both devices.

A fair portion of this adventure revolves around rescuing the missing citizens of the mining community, with some of them filling vital roles. Now and then you stumble upon one inside of a cage, just waiting for you to flip a nearby switch so you can release them. They then mosey back to town and resume their functions there, sometimes opening shops or providing services. For instance, one guy smiths new weapons out of ores you find, and another person sells and upgrades spells. Of course, you can also purchase consumables from two different people, one who brews potions and another who bakes desserts. 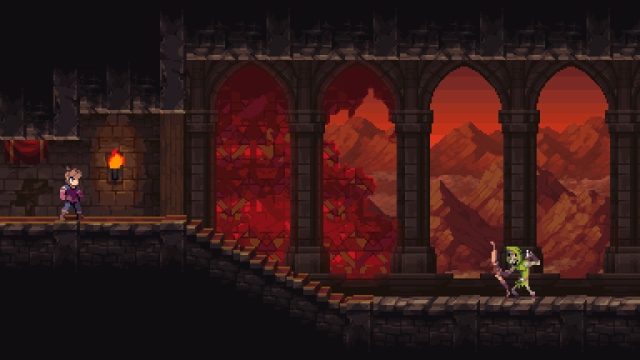 To make things more rewarding, you can also locate personal belongings that each character desires from the maze. For instance, the blacksmith wants his hammer back. If you find it, he'll craft and sell more powerful pieces of equipment. The same goes for the magician, who longs for a particular book lost in the dungeon. Recipes constitute arguably the most useful of these objects to secure, as they grant you access to new potions. In particular, one of them allows you to glimpse invisible items, including a couple of treasure chests found in the labyrinth that can't be seen otherwise.

Combat remains as cut and dry as you'd expect, for the most part. Each foe has its own battle pattern to get around and exploit. The thing is certain adversaries really rip into you if you're not careful. You can't merely approach most of them and slash away with reckless abandon and not expect to get wrecked. Some foes, like a golem midway through the campaign, hit you with explosive strikes that require you to pay attention to tells and learn how to properly maneuver your character to avoid or mitigate damage--usually either by jumping, floating, or utilizing the backstep the game provides. Most of all, though, you can have to know when to strike without leaving yourself open.

As with any Castlevania via Metroid affair, this one rewards you for successfully offing the opposition. Not only does it showcase standard RPG elements, but useful items dropped by murdered monsters. Farming constitutes a huge chunk of customizing and beefing up your character, as it loads you up with metals for crafting and unique pieces of equipment. One of my favorites is an assassin's sword that gains permanent bonuses as you rack up kills with it. By the finale, it can grow into one of the best weapons available. 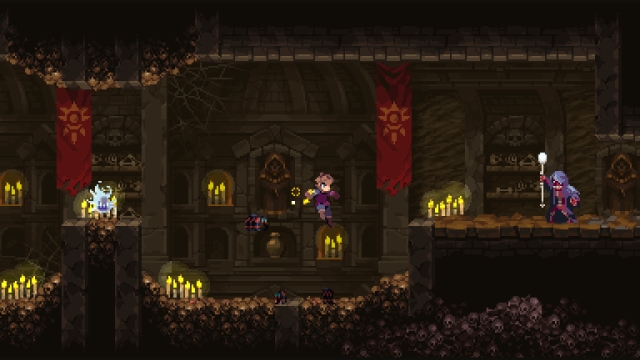 Chasm offers a fine revisit of the handheld era of Castlevania without blatantly stealing that franchise's Gothic horror trappings. Instead, this one goes for more of a "western meets medieval" style not unlike Wild Arms or Stephen King's "The Dark Tower," minus all the guns. This one is more like "look at all these knights and prospectors, and just listen to that twangy, obviously western music." Whether or not you'll be interested in this title rests mostly on two things: how off-putting do you find pathfinders and procedural generation? If you're one of the many people tired of one of those two features, maybe give this one a pass. Otherwise, welcome to the 4578453487th Metroid knockoff, now with a scrambled map!

If you enjoyed this Chasm review, you're encouraged to discuss it with the author and with other members of the site's community. If you don't already have an HonestGamers account, you can sign up for one in a snap. Thank you for reading!

© 1998 - 2022 HonestGamers
None of the material contained within this site may be reproduced in any conceivable fashion without permission from the author(s) of said material. This site is not sponsored or endorsed by Nintendo, Sega, Sony, Microsoft, or any other such party. Chasm is a registered trademark of its copyright holder. This site makes no claim to Chasm, its characters, screenshots, artwork, music, or any intellectual property contained within. Opinions expressed on this site do not necessarily represent the opinion of site staff or sponsors. Staff and freelance reviews are typically written based on time spent with a retail review copy or review key for the game that is provided by its publisher.