Before I ever heard about a company called Sega, I played Zaxxon. I should emphasize that I spent very little time with it. The teacher who taught at the one-room school that I attended at the time would sometimes have it running on a Commodore 64 he brought in for class use, but students weren't allowed to play non-educational games very often. When rare exceptions to that rule came about, my attention was almost always occupied instead by the Apple IIe and the copy of Mario Bros. that was also available.

On the occasions when I did choose to play Zaxxon, which my teacher insisted was great, I found that I really sucked at it. My self-evaluation on that count may also have had something to do with the fact that I was able to play Mario Bros. at length with very little difficulty at all. 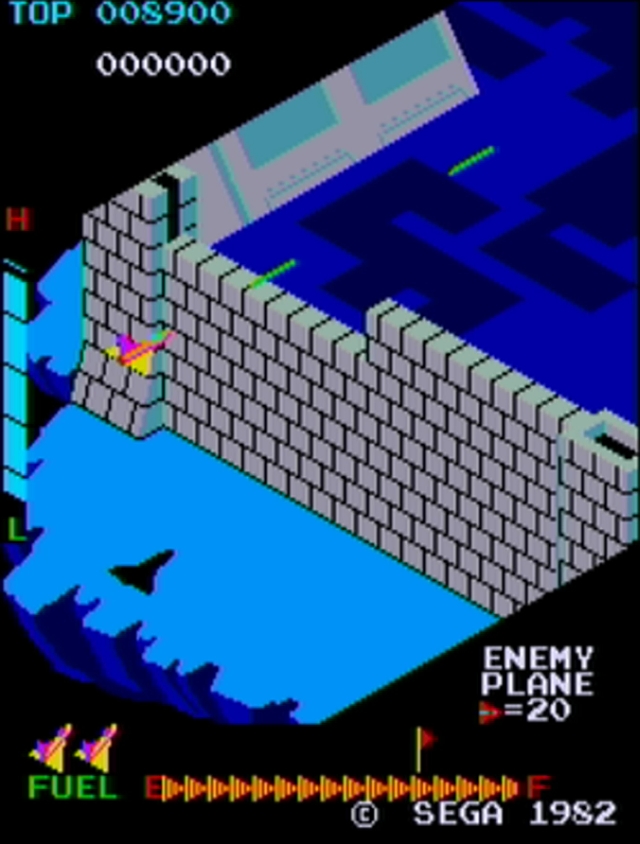 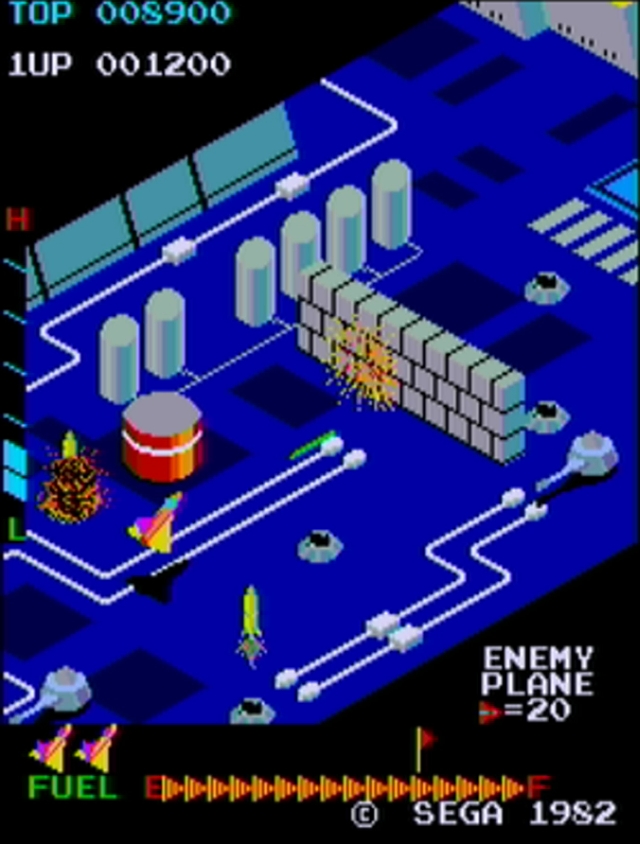 Zaxxon begins with a ship flying through space, advancing steadily toward an oversized asteroid with a brick wall constructed along its edge. The perspective is isometric, and the ship's elevation must be considered at regular intervals. You can't simply fly left or right because if you remain at a single height for too long, you'll either be blasted out of the sky by a homing missile or you'll run into a low-lying wall or some other hazard.

Whenever I played Zaxxon during that particular school year, I seldom got past the first wall. Let me remind you that I was only in the third grade. For some reason I wasn't quite able to grasp the concept of vertical positioning, so I would crash into the bricks a few times and then I was done. If I did get over the wall, which happened sometimes with my teacher's encouragement and instruction, then I would almost immediately find myself felled by the limited but efficient series of hazards that lurked just beyond it.

As you make your way through that first base in Zaxxon, you must shoot fuel towers to replenish your supply. This is only possible if you swoop down almost to the ground, which then means you must weave between inconveniently placed bays that open and fire rockets. Then, you have to be ready to ascend again in time to avoid the aforementioned walls strewn about the complex. In my brief experience with the game's Commodore 64 version, I never made it past the first base. If I'm being entirely truthful, I never even came close.

More recently, I finally decided--after years of thinking about doing so, and with prodding from EmP--to return to Zaxxon with my "elite" skills that I have honed over the course of more than two decades of gaming. I don't have access to a Commodore 64, but I do have a Wii U and that means I was able to spend $8.00 and download the arcade version of the game for the original Virtual Console. Incredibly, I had managed to find a way to support Nintendo while playing an ancient Sega game that I had once ignored for the sake of some Mario Bros. action. That was quite the happy accident. 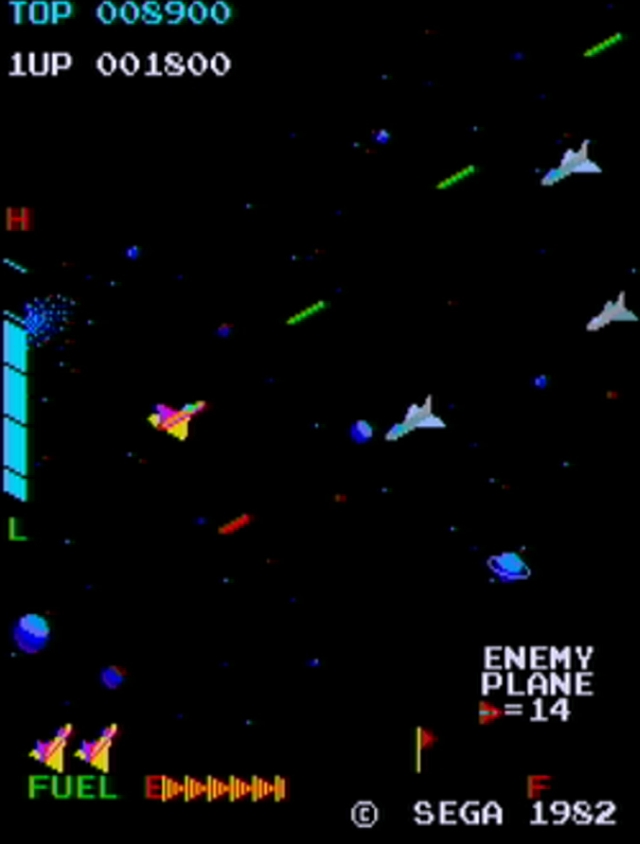 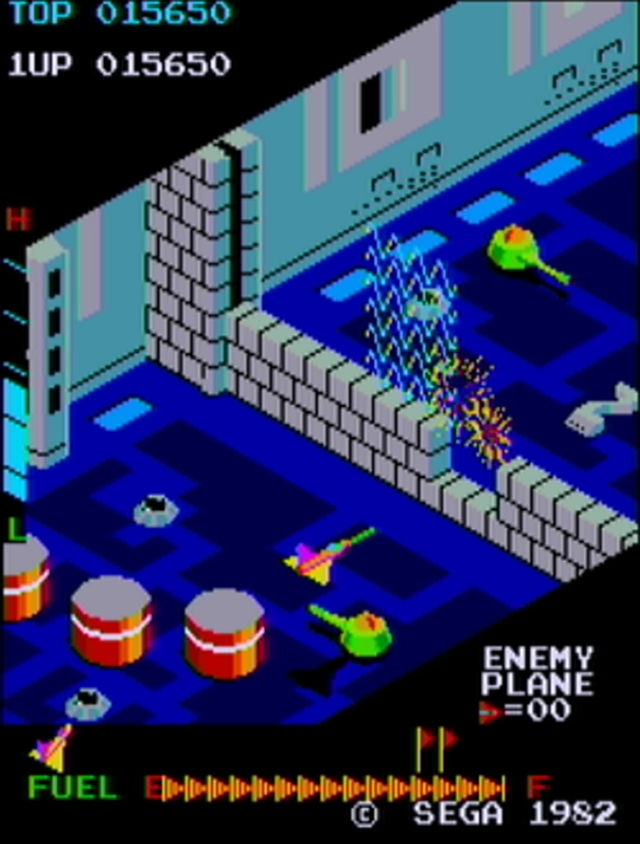 My new encounter with Zaxxon went considerably better than my previous ones, I'm pleased to report. On my first attempt--my very first attempt --my ship sailed easily over that first wall and I even managed to steer around some rockets before one of them reduced my ship to a disappointing pile of scrap metal. I kept flying from there, and I maintained my advantageous high elevation. That homing missile I mentioned a bit ago kept taking me out, though. I would shoot it, I would swoop to the left or right and it would still dispose of me like so much trash. That's when I cleverly realized that I could avoid such a fate by regularly varying my elevation from time to time. This is the sort of thing I never learned in the third grade, probably because I didn't ever last long enough for such techniques to become relevant.

Though I still wasn't especially good at the game, I managed now to get much further and multiple sessions also allowed me to improve. I was finally able to reach the far side of the base and sail over another wall, which introduced me to a black void where ships circled and dive-bombed and fired lasers that I avoided like the quick-witted pro I am. At least, that's how things went on the second or third such encounter.

Eventually, I discovered that after that batch of ships, another asteroid base awaits. This second base is much more difficult than its predecessor because it focuses less on rockets and fuel stations and more on brick walls. I realize that brick walls don't sound like a fearsome hazard. The problem is that they are accompanied by electrical barriers. You fly toward one and find that if you are too high, you get fried. If you are too low, or positioned too far to the left or right, you crash against the wall. Determining the exact height that will get you through unscathed is extraordinarily difficult thanks to a viewing angle that offers too little certainty, though it becomes considerably more manageable once you realize there really are only three approximate heights worth worrying about. Your best bet at first is to shoot at the wall and adjust elevation until your bullets pass through the opening. If you take too long figuring out that precise height, of course, you're done for. Later, you'll memorize the requirements and not have so much trouble. 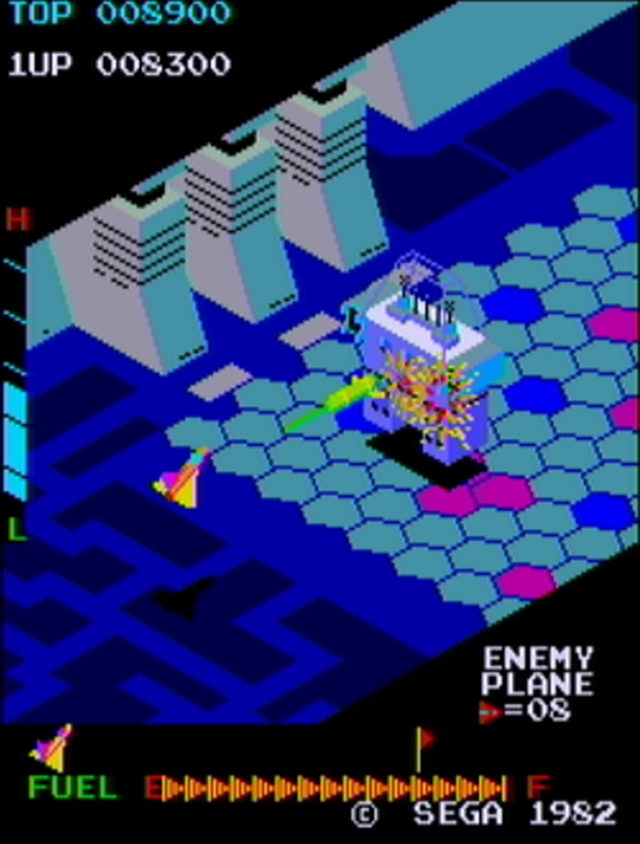 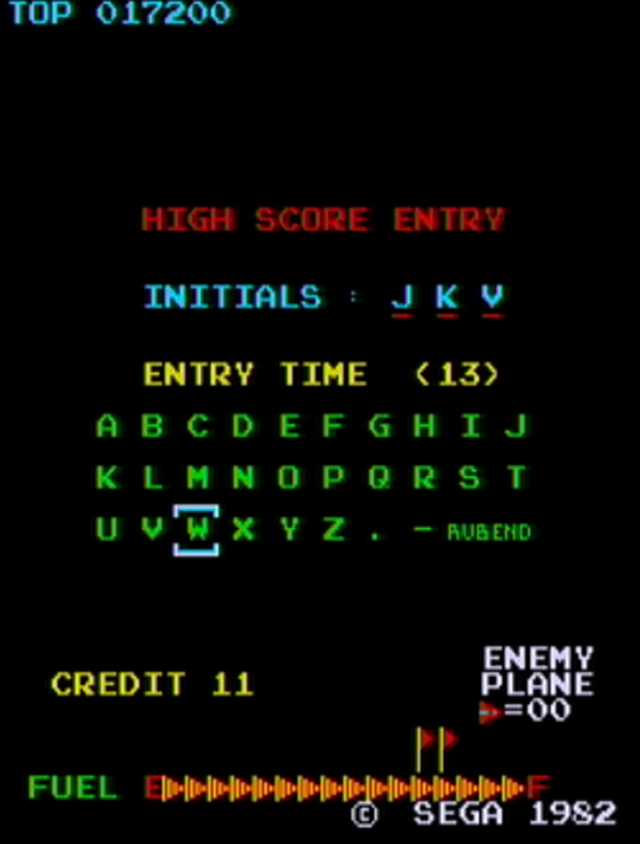 After you overcome the walls, you can finally take on the eponymous Zaxxon menace. He attacks with those awful homing missiles. Then the same three stages you already cleared will repeat indefinitely, now with tougher resistance, in the manner of most arcade titles of the era. Eventually, you're bound to crash your last ship and you can enter your initials and try again, chasing eternally after a higher score that no one else is likely to ever see. This sort of setup was sufficient in 1988 or so, when I and many other young gamers were first playing the game, but I was too stupid to enjoy it properly at the time and now the experience feels too limited to function as anything more than a mild curiosity. Sega hasn't meaningfully updated the IP, either, which means most of today's audience likely haven't even heard of it.

I rather like Zaxxon, at least to the extent that I'm glad it is available to download and play on my Wii U. The Wii Points I sacrificed for the cause were worth it because then I was able to enjoy a stroll down memory lane and enjoy an experience that at one point was quite impressive. Unless you played the game back in the day and can get a similar kick out of revisiting it now, though, I wouldn't recommend making a similar investment. Games have come a long way but Zaxxon has not

If you enjoyed this Zaxxon review, you're encouraged to discuss it with the author and with other members of the site's community. If you don't already have an HonestGamers account, you can sign up for one in a snap. Thank you for reading!

© 1998-2020 HonestGamers
None of the material contained within this site may be reproduced in any conceivable fashion without permission from the author(s) of said material. This site is not sponsored or endorsed by Nintendo, Sega, Sony, Microsoft, or any other such party. Zaxxon is a registered trademark of its copyright holder. This site makes no claim to Zaxxon, its characters, screenshots, artwork, music, or any intellectual property contained within. Opinions expressed on this site do not necessarily represent the opinion of site staff or sponsors. Staff and freelance reviews are typically written based on time spent with a retail review copy or review key for the game that is provided by its publisher.