In Sound Mind is a first-person psychological horror title and it wants you to know that right away. As the story begins, the perspective zooms through a town at night; specifically, one that is partially submerged in an oily substance. Eventually, the viewpoint makes its way into a building until settling into a first-person view of the protagonist. You, now taking control of a therapist named Desmond Wales, inexplicably find yourself in an apartment building's trash room. As you make your way to the upper two floors via an elevator, you experience strange occurrences in a world void of normal life. Such instances include constantly finding barrels with rainbow liquid oozing out, a black cat gazing from a distance, and a phone randomly ringing as you stroll past it. As you walk down a long corridor, hearing all sorts of creaks, you turn around and see the hallway get replaced by a wall.

If all that sounds a bit disjointed, it's because In Sound Mind is going along with the notion that Desmond Wales has been transported into a dream-like domain, one filled with dread and otherworldly threats. A little ways into the game, you then realize the story revolves around the deaths of his recent patients and how they may be connected to a conspiracy. From there you travel to different locations relating to each patient via cassette tapes, in the hopes of finding answers. Interestingly, each area is an amalgamation of a patient's problems, fears, and usually the last place they were alive. 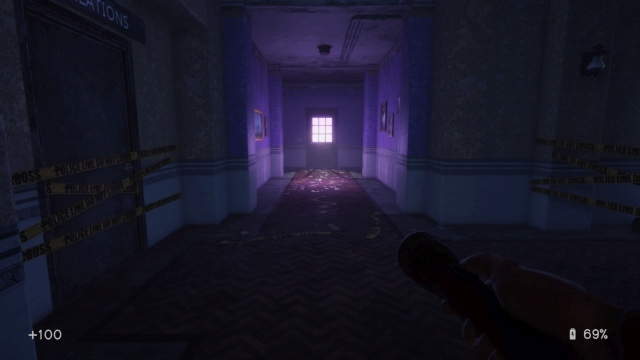 The first main area, for example, revolves around Virginia, who had a fear of people perceiving her scarred face in public. When a local grocery store shut down due to the Walmart Homa Mart superstore taking away their revenue, she was forced to shop there, a more congested space. This is where Virginia's area occurs in, but now in a closed-down and ruined state due to an "incident." As you walk the dark aisles using a flashlight with limited battery usage, you will encounter Virginia as a glowing purple phantasm; she immediately charges through your body if you look in her general direction. However, with this location's main threat comes a unique gimmick: a broken mirror shard. You essentially use this to look behind you for Virginia while navigating most of the "stage." It comes off clumsy at times, but it's certainly a creative gameplay solution.

That summarizes the basic flow as you travel from one location to the next, encountering a specific environment's hazard, and finding ways to either confront or avoid it using a new item; the apartment complex serves as a hub between said areas. All the while, you will run into other abnormalities, such as standard enemy fodder in the form of humanoid creatures in psychedelic colors, the warping of reality when you look away from something for a second, and a central antagonist that likes to mess with you. This main adversary, donning a tan suit and a hat that's shading a disfigured face, has a knack for mocking and cracking jokes throughout the game. Those phone calls? They're all him. He's also responsible for most of the "jump scares," since he has a habit of abruptly entering a scene when you least expect him to. Really, the only thing he's missing is a claw glove. 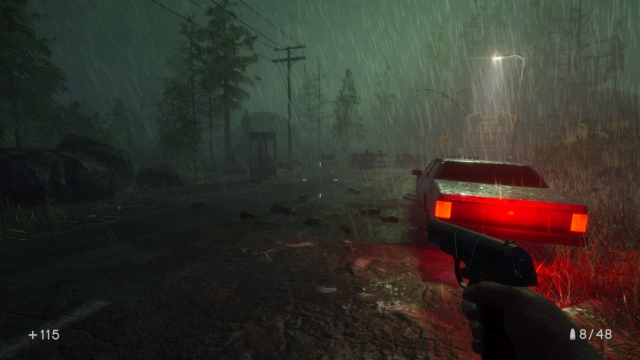 While it is true you confront all the aforementioned lunacy, the unfortunate reality is that you only experience the best parts in short bursts. Very short bursts. Despite the endless potential of pulling from its trippy, nightmarish set-up, that concept isn't fully utilized. So then how does the majority of the game play out? Sadly, it feels like a standard first-person "adventure" title, and not a particularly standout one at that. You're basically performing fetch quest objectives, such as... going from one end of a building to another to get a key and back again, so that you can then... do a variation of that task. Take a fuse and put it in another slot? Sure. Grab electrical chips and repeatedly place them in different sections of a trainyard? Have fun with that. How about obtaining a valve wheel and then using it at least five times in a row in the span of five minutes? Fantastic.

You know the craziest thing about those repetitive tasks? In Sound Mind actually pokes fun of that concept several times, as if completely unaware that it's unironically doing the very thing it's making fun of...

The previously-mentioned enemy fodder occasionally breaks up the "puzzle-solving" with combat. How do you fend off said foes? Again, you would think its central gimmick would lend to imaginative powers, but nope: you obtain the usual handgun and shotgun duo, along with a flaregun for plot reasons. These psychedelic opponents don't even bring anything interesting in terms of fighting; if you've played any generic first or third-person shooting game within the last 20 years, then you already know you're getting basic AI strafing and charging maneuvers here. The AI is so simple, that standing on anything two feet off the ground makes a complete mockery of most melee attacks. And this game has a lot of things you can jump on. 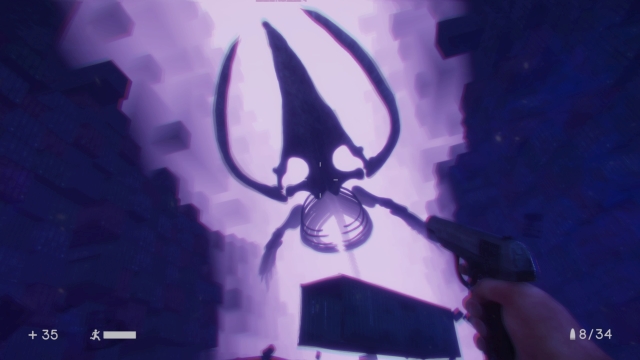 Thankfully, there isn't so much combat to where you would mistake this for a shooter. But then you're right back into fetching more items... These wouldn't be so bad if you only had to deal with tasks in a manner of minutes, however the game loves stretching out these mundane objectives. On your first playthrough, you can literally suck away hours doing something like fetching fuses or unlocking doors, as if the devs did this to compensate for length. It's a pity, because when the game actually does something clever, it makes you want to keep playing. One such example involves getting locked in a room with no way out other than up, but there's no way to get there; without spoiling, you basically have to grab an item from somewhere to materialize something into existence. That's using the game's dream-like concept to its potential!

If the entire experience had a bit more polish in all aspects, this might've actually worked, but instead it gives off the vibe that you're playing a mod for another game. Not surprisingly, the dev team of We Create Games previously crafted the Nightmare House 2 mod for the Source engine. Taking that into consideration, some aspects of In Sound Mind do come off impressive since a small staff did it, such as the giant bull skull that hunts you like prey in one area. No really, that's an actual thing that occurs; it's even accompanied by a heavy metal theme. Now if you're still convincing yourself that the game sounds fun, you should ask yourself this: are you willing to grind hours of monotonous busy work for brief moments of intrigue and creativity? Hopefully, We Create Games can display more engrossing gameplay in future outings, because this definitely shows they have a vision.

If you enjoyed this In Sound Mind review, you're encouraged to discuss it with the author and with other members of the site's community. If you don't already have an HonestGamers account, you can sign up for one in a snap. Thank you for reading!

© 1998 - 2022 HonestGamers
None of the material contained within this site may be reproduced in any conceivable fashion without permission from the author(s) of said material. This site is not sponsored or endorsed by Nintendo, Sega, Sony, Microsoft, or any other such party. In Sound Mind is a registered trademark of its copyright holder. This site makes no claim to In Sound Mind, its characters, screenshots, artwork, music, or any intellectual property contained within. Opinions expressed on this site do not necessarily represent the opinion of site staff or sponsors. Staff and freelance reviews are typically written based on time spent with a retail review copy or review key for the game that is provided by its publisher.