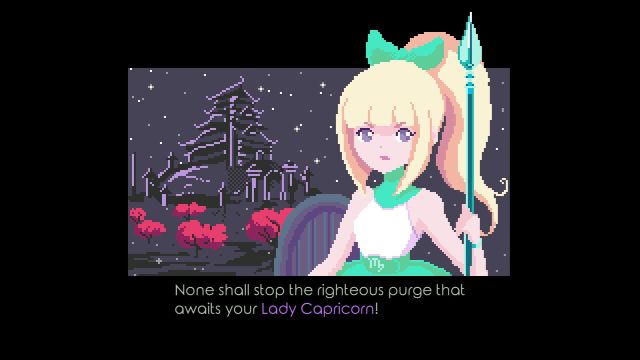 Shortly after I began Virgo Versus the Zodiac, I thought maybe I had made a terrible mistake in playing it. Between a tricky difficulty rating and a confusing story, I wasn't having a good time at all. But these negative statements feel alien to me now, as if they originate from an alternate universe where I didn't finish the game and immediately start a new playthrough so I could witness a different ending. Something shifted somewhere between the moment the antihero Virgo broke down Capricorn's front gate and the rather downbeat ending I received, and this title from developer Moonana managed to ultimately impress me.

At first, though, I had no idea what the hell was going on. Someone off-screen started the campaign by narrating about her sister, Virgo, and her wacky ideas. Something about the Zodiac constellations ruling and a Golden Age, and I had no idea what any of that meant. Finally, a blonde girl with puritanical tendencies and her antlered cookie companion (Ginger) landed and started killing goat people who worked for a corporation owned by Capricorn. They were all union workers who were also striking, but rather than lend support, the villainous protagonist called them "heretics" and offed them in droves. It was all weird stuff and hard to relate to at first, but it somehow proved mesmerizing enough that a tiny voice kept urging me to stay the course.

Meanwhile, combat consisted of a mishmash of Super Mario RPG and rock, paper, scissors, but with an unconventional equipment system. Each piece of armor or weaponry I held gave me access to a different attack or defensive stance. Timed button prompts and the occasional QTE associated with those maneuvers appeared after I selected them in battle, allowing me to either dish out additional damage or absorb some of an enemy's blow. These weren't just pleasant bonuses, but something I needed to rely on because my foes packed a punch and healing resources were sometimes limited. Unfortunately, I couldn't get the timing right on most of them, which led to a lot of blame shifting to my controller, my computer or the mechanics. In actuality, a lack of acclimation turned out to be the culprit... 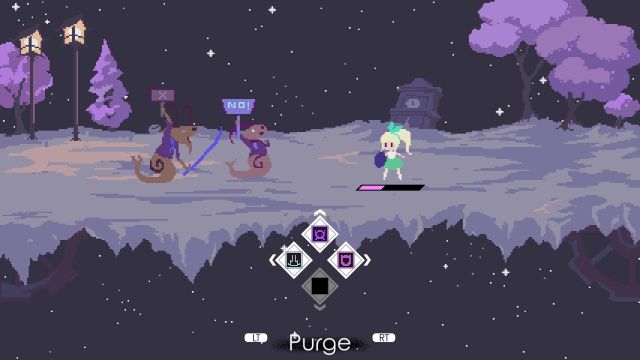 Further events added new allies, each with their own assigned button. For instance, if an enemy targets Virgo, I had to press A to dampen its spell. But if her servant Spica became the target, I needed to press X instead. As you can imagine, that led to all sorts of confusion during battle, with me pressing the wrong button often. It also didn't help that just about every move comes with either a buff or debuff to consider, each one modifying stats with unconventional names. I had no idea what purity or destiny or cardinal defense or versatility or patience pertained to, but I had to assume that gaining them was desirable and losing them was worrisome. Thankfully, I noticed Virgo's status screen lists all of those stats and allowed me to hover a cursor over them to receive an explanation. They mostly turned out to be the usual suspects, except renamed for thematic effect.

It only gets more muddling, believe me. I also had to pay attention to colors when using strikes or equipping new duds because of the aforementioned rock, paper, scissors system: green harmed red, red damaged purple, purple killed green. On top of that, combat hinged on my ability to protect myself and utilize effective counterattacks. Whenever I used a defensive option, I gained "purity," which acts as a shield or secondary source of hit points. If an adversary struck me while I had some purity remaining, a list of commands would appear, usually offering some powerful counterattacks. Hell, I leaned heavily on the defend-counter strategy through the first two areas because I didn't manage to grab any useful offensive skills until later in the proceedings.

Yeah, I actually managed to advance "later in the proceedings" rather than tucking my tail and running. Virgo may seem odd and non-traditional, but it makes more sense the longer you stick with it. This is true for both mechanics and storytelling, as the latter becomes clearer once more information becomes available. At first, Virgo seems like she wandered off an mid-2000's NIS game, like Disgaea. Her character seems to be all schtick with only a hint of depth early on, but plot revelations eventually show both the nature of her mission and her motivation. The same goes for one of her cohorts, a mask-wearing star named Algol. She initially comes off as generically sinister, but once you actually dive into her backstory, she becomes one of the better supporting characters. 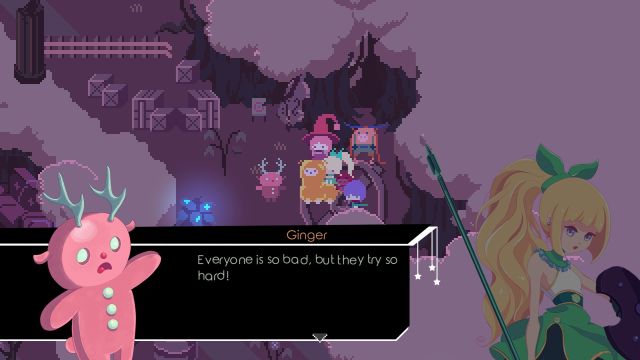 My only complaint is that I wish there had been more development for Virgo's partner, Pisces. The game offers some wonderful romantic scenes between them, but only does this after ignoring Pisces for hours. She pops up at the beginning, and there are hints that the two of them are a couple. Then she disappears, and you wonder if she wasn't just a hallucination. She is supposed to be Virgo's love interest, after all. But then she throws a party and suddenly we get a ton of development all at one time. Ultimately, I'm glad she got fleshed out a little, but it would've been great to get more info on her earlier on.

By and by, I improved, found my rhythm and survived battles. I learned to experiment with attacks, recognize buffs on monsters and piece together strategies for dealing with them. Acquiring as much equipment as possible and constantly upgrading it helped as well. Since the game allows save spamming, I found a lot of success trying out different articles in battle and reloading if the effects weren't satisfactory. In other words, even older, junkier bits of equipment still served a purpose. 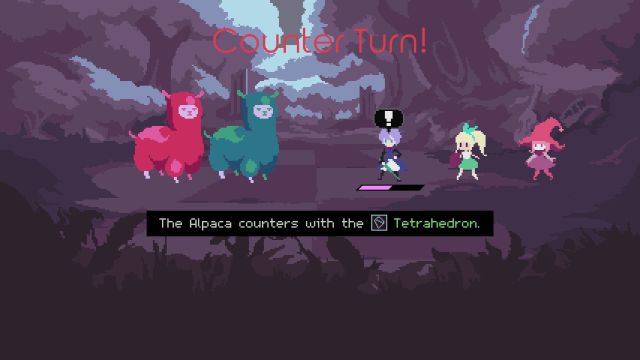 Between experimentation and a combat system that forces you to pay attention and interact, I found the game to be quite engaging and entertaining. I was always involved, but became more compelled to play and see where else the strange journey would take me. An alpaca maze? Check. A vampire hotel? Check. A circus built on a volcano? Check. A shoot 'em up mini-game with helpful goodies as prizes? Also check.

So while Virgo may kick off in a rocky fashion, it becomes clearer the longer you stick with it. The characters grow more interesting as you become comfortable with them, and you learn to enjoy the challenging combat system as you practice (or you can turn down the difficulty rating, which grants you more lenient timed attacks and added damage for your strikes). Eventually, like me, you might unwittingly reach a depressing conclusion that prompts you to restart so you can walk a less dreary path. At least the second time, you'll know what to expect and welcome it all the more.
4/5

If you enjoyed this Virgo Versus The Zodiac review, you're encouraged to discuss it with the author and with other members of the site's community. If you don't already have an HonestGamers account, you can sign up for one in a snap. Thank you for reading!

© 1998-2021 HonestGamers
None of the material contained within this site may be reproduced in any conceivable fashion without permission from the author(s) of said material. This site is not sponsored or endorsed by Nintendo, Sega, Sony, Microsoft, or any other such party. Virgo Versus The Zodiac is a registered trademark of its copyright holder. This site makes no claim to Virgo Versus The Zodiac, its characters, screenshots, artwork, music, or any intellectual property contained within. Opinions expressed on this site do not necessarily represent the opinion of site staff or sponsors. Staff and freelance reviews are typically written based on time spent with a retail review copy or review key for the game that is provided by its publisher.