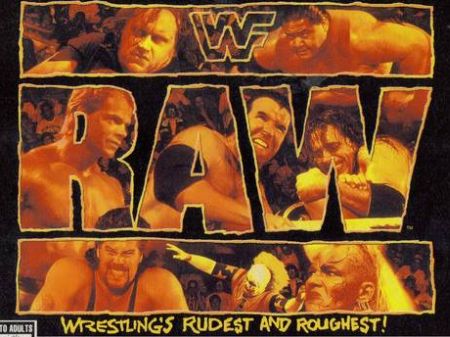 Oh, the things we take for granted... Nowadays, if a wrestling title doesn't include a detailed character creation mode, numerous match types, expansive move sets, true-to-life entrance cutscenes with authentic music, and a starting roster of anywhere from forty to sixty performers, it might be considered crap. Back in the day, though, we didn't have such luxuries. WWF Raw, for instance, only featured thirteen playable combatants, a few different match types, no means of designing new wrestlers, and four or five different move sets. Yeah, needless to say it's severely obsolete in comparison to the yearly releases we receive these days from the WWE license.

You might expect me to shake my aged fist at you whippersnappers and proclaim that we didn't need all of the aforementioned neat extras in our 16-bit grapplers. After all, our ancient WWF carts had something special that newer titles couldn't hope to showcase. We had... um... Owen Hart?

Here's the thing with older WWF/E games, especially those published by Acclaim and/or LJN: being antiquated is only a fraction of the issues they sport. At best, Raw is a generic wrestling title marketed to appease fans of the '90s, especially those who were invested in what was then known as the "New Generation" (which was the precursor to the beloved "Attitude Era"). I say this because the game lacks in certain departments to the point that you might question whether or not the developers even paid any attention to the source material. 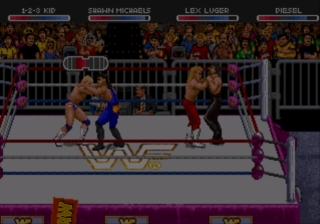 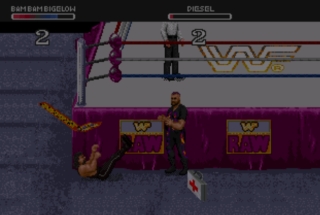 In terms of its roster, the developers at Sculpted Software got Raw mostly right. Major names such as Bret Hart, Shawn Michaels, Razor Ramon, Diesel, and Undertaker highlight the roster, along with fading main card wrestlers like Yokozuna and Lex Luger. The only standard member of the lineup I question is Luna Vachon. I'm not against having a female wrestler on board, but why Luna and not Alundra Blayze? You know, the reigning WWF Women's Champion whose role was to revitalize its then-struggling women's division? Besides, delivering a German suplex as a finisher would have been way cooler than executing Luna's... You know, I'm not even sure what her finisher, the Luna Eclipse, is supposed to be, but I don't think I ever witnessed the move on the program.

One advantage the 32X edition of Raw boasts over other incarnations is the presence of an exclusive unlockable character, accessible via cheat code. You'd think Sculpted Software would have included either a relevant wrestler who didn't make the initial cut--British Bulldog and Bob Backlund come to mind--or a classic wrestler like Andre the Giant. Hell, they could have even given us either Marty Jannetty or Bob "Spark Plug" Holly, but no. Instead, they stuck us with Kwang: a martial arts master from "The Orient" who was actually Savio Vega in a mask. For those who don't recall this persona--and no one will blame you for the lapse of memory--he was a glorified jobber managed by Harvey Whippleman whose only significant storyline involved a brief feud with a face-turned Adam Bomb. Why he was tossed in as a hidden wrestler when there were numerous others who would have been a better fit is beyond me.

Despite two minor hiccups in the collection of competitors, Raw features a solid lineup of contemporary names. Sadly, though, the developers failed to make much use of them. For starters, there isn't much of a difference between each grappler. Mechanically speaking, Bam Bam Bigelow operates similarly to Owen Hart, Undertaker plays like 1-2-3 Kid, and there's maybe a tiny difference between Diesel and Doink the Clown. On top of that, all of their character models are very similar, displaying only slight modifications. This wouldn't be a problem if they were all the same build, but you have to take into account a couple of outliers: Diesel and Yokozuna. The former stood nearly seven feet tall, yet he's the same height as everyone else, and the latter doesn't appear to be well over six hundred pounds. 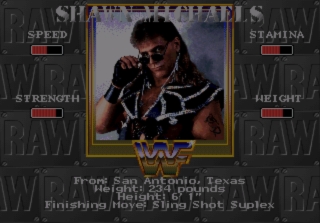 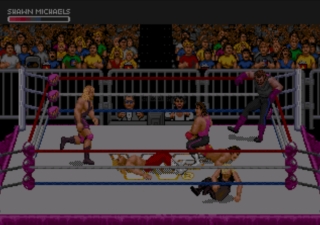 While it's commendable that Raw moved away from its predecessors' standard of only featuring a single move set for every wrestler, Sculpted still managed to drop the ball where maneuvers are concerned. Yeah, it's great that Bam Bam performs slams befitting a chubby guy, or that Bret Hart can do more than a simple body slam or suplex. Unfortunately, each wrestler's move set doesn't take into account their own signature moves and personal mannerisms. In other words, don't expect to see Undertaker's choke slam, Owen Hart's enziguri, Diesel's sidewalk slam, or Lex Luger's torture rack.

Oh, but you can perform zany "super moves" with each character! Never mind that Yokozuna can't cut loose one of his awesome leg drops or belly-to-belly suplexes, because he can perform a cannonball dive off the top rope!

I realize that most of this review consists of me badgering a game that really isn't that bad of a title. I mean, it really does feature a fair array of maneuvers and a decent number of options. This is one of the few WWF titles from the 16-bit era to feature both Survivor Series and Royal Rumble matches, in addition to one-on-one, tag team, and "bedlam" (tornado tag, where all contestants are inside the ring instead of only two at a time). Mechanically speaking, the game works as it should. Grappling is simple, requiring only a single button. Once you've locked horns, you need only consider which maneuver you wish to utilize and mash its corresponding button until you've pulled it off. It's not the most interesting system, but it does get the job done, and it's quick and effective enough to result in some fast-paced matches.

Unfortunately, the game's serviceable combat system isn't enough to make up for the massive deficit where polish is concerned. The last thing I would expect from a game based on an American pro-wrestling promotion is a lack of attitude or personality, but WWF Raw is about as characterless and charmless as a grapplefest can get without actually being a broken title. I feel that Acclaim may have realized this at some point, and that's why they introduced the super moves, but let's face it: it would be a much better service to your fans to can the ridiculous crap that has nothing to do with the product and design characters that look, act, and play like the individuals they're based on. You'd think such a notion would be a no-brainer...
2.5/5

If you enjoyed this WWF Raw review, you're encouraged to discuss it with the author and with other members of the site's community. If you don't already have an HonestGamers account, you can sign up for one in a snap. Thank you for reading!

© 1998-2021 HonestGamers
None of the material contained within this site may be reproduced in any conceivable fashion without permission from the author(s) of said material. This site is not sponsored or endorsed by Nintendo, Sega, Sony, Microsoft, or any other such party. WWF Raw is a registered trademark of its copyright holder. This site makes no claim to WWF Raw, its characters, screenshots, artwork, music, or any intellectual property contained within. Opinions expressed on this site do not necessarily represent the opinion of site staff or sponsors. Staff and freelance reviews are typically written based on time spent with a retail review copy or review key for the game that is provided by its publisher.