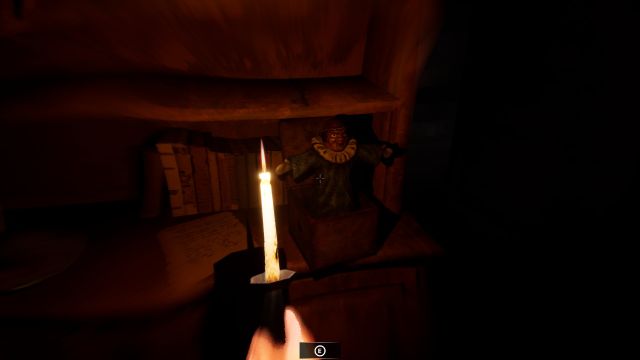 In just thirty minutes, I witnessed both endings of the horror game 1406 in all their glory. In one conclusion, I ran afoul of a life-threatening event. Instead of trying to fight it, I leaned into the oncoming calamity. One quick thing occurred as a result, the screen blurred and two words popped up--and no, they weren't "game over." YOU DEAD! Yes, I dead. Er, deaded? Ceased to exist in any case...

Because I apparently hate myself, I decided to start the whole shebang over to see if I could not "dead" at least once. Instead of letting the aforementioned bad thing occur, I decided to try opening the front door. With every attempt, I could hear my character growing more furious, but it just wouldn't give. So I sat there, did nothing, then heard a click. I twisted the knob again, exited the premises and received yet another two words, this time informing me that I didn't dead. One quick, uneventful transition later, I was back at the title screen. "Wow, that was so worth it," I thought.

As you can tell, 1406 is an extremely weak haunted house product. You take the role of a paranormal investigator and writer who decides to spend time in a tiny, creepy house so he can write about a poltergeist. At least, that's what I gathered from his somewhat mistranslated notes, with one confusing line stating, "There is no house, the usual old house." I'm not sure what that means, but context clues tell me he's yammering about a house associated with ghostly activity. 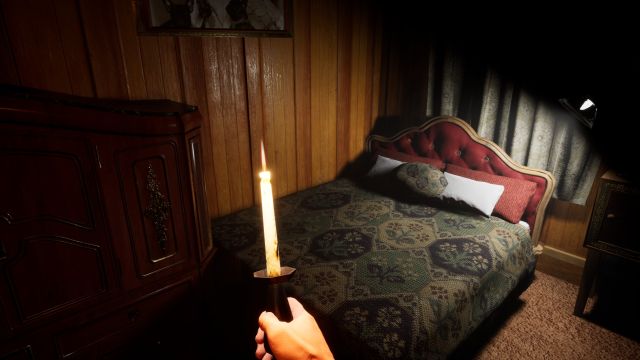 You begin this first-person adventure in bed, disturbed by someone at the door. You awaken, pull out a candle and commence investigating the whopping three rooms that make up this domicile: a cramped bedroom, a kitchen and a bathroom (which is locked). At first, your objective isn't clear, but you find a couple of things to tinker with and some notes to read. A jack-in-the-box opens up, attempting to scare you with a character that's trying so hard to be unnerving that it's not unnerving as a result, plus a note informs you that some malevolent force is trying to make you commit suicide so it can steal your soul. Obviously, this isn't a subtle, nuanced kind of horror story...

One thing you'll discover after playing a few minutes is that there really isn't no major goal here, other than finding a key to unlock the bathroom. You spend the entire campaign moseying from one room to another while the game barrages you with haunting cliches. To advance the story, you simply need to traipse into a room and hope that you trigger some kind of phenomenon. Bleeding walls and ghostly phone calls pop up, as well as an Evil Dead-ish view from the spirit's perspective outside the house. There's maybe one part that's kind of neat, where you see a huge demon head roars in your face (a la the movie "Poltergeist") and eventually dissolves, causing exactly no harm. There is no intellectual process to advancing the plot. You just walk around and things happen seemingly at random. 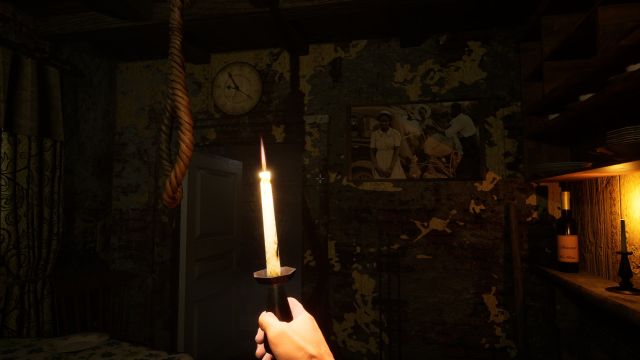 Honestly, I'm not even sure what purpose this title serves. It doesn't really try to terrify, if its usage of tame and worn out scares is any indication. It doesn't offer much of a story, and only consists of frights without much context. It lacks in regards to content, providing only a minuscule playing field and failing to make use of the potential for claustrophobic horror. More than anything, it feels like its developer, indie_games_studio, just slapped together a haphazard living space and clumsily dispensed of cheap, unimaginative frights, then called it a day.

Short horror games have gained a bad reputation that they don't entirely deserve, mostly because people have learned to associate that broad category with pieces like this one. The impression everyone gets is that developers crank these titles out with minimal effort so they can make quick dollars from undiscerning genre fans. I'm not going to speculate on whether or not that was the case here, but it's hard to see a game this lacking in structure, content, creativity and intent as anything but a low effort cash grab.
1/5

If you enjoyed this 1406 review, you're encouraged to discuss it with the author and with other members of the site's community. If you don't already have an HonestGamers account, you can sign up for one in a snap. Thank you for reading!

© 1998-2021 HonestGamers
None of the material contained within this site may be reproduced in any conceivable fashion without permission from the author(s) of said material. This site is not sponsored or endorsed by Nintendo, Sega, Sony, Microsoft, or any other such party. 1406 is a registered trademark of its copyright holder. This site makes no claim to 1406, its characters, screenshots, artwork, music, or any intellectual property contained within. Opinions expressed on this site do not necessarily represent the opinion of site staff or sponsors. Staff and freelance reviews are typically written based on time spent with a retail review copy or review key for the game that is provided by its publisher.