In my time Ive played a lot of point and click games. Ranging from the colourful and hilarious offerings of Lucasarts, the clever and intriguing noir worlds of Revolution and the numerous Quests developed by Sierra. I consider it my genre; its my time killer of choice. Ive marched through them all.

However, all of those games had one thing in common. They were made by teams of people; specialist programmers responsible for crafting background music, graphical artists building worlds pixel by pixel, writers who pen scripts and coders designing and building engines that beat like a binary-constructed heart, driving them all. So, what happens when you give all those jobs to just one person, no matter how gifted such a person might be?

Your name is Trilby and your occupation is that of a gentleman thief. A grandiose moniker for a villainous profession that involves stealing anything not bolted down, but one that signifies a playful code of honour. As such, the profession has its share of charm if you are particularly skilled and employ a keen and clever eye in choosing the locations of your next heist. Trilby chose the now-derelict DeFoe Manor for his next operation. 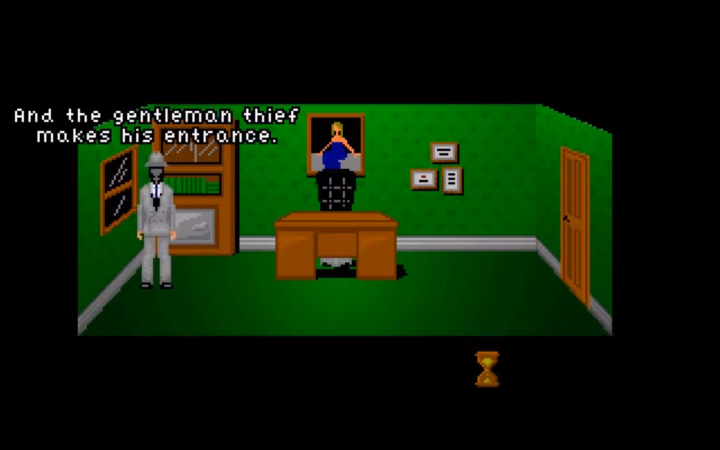 The moment you stroll in through the window (as is apparently the way of a gentleman thief), you find out youre not alone within the mansion. A few other visitors came along with their own agendas; some to pursue glory, others wanting to satisfy their curiosity and more still drawn in by the estates macabre past. However, as you will soon learn, curiosity comes with a hefty price. While exploring the mansion you find clues that speak well of a history marked with blood, degradation and violence. The option for retreat is cruelly snatched from you: upon examination, all possible exits are, in one way or the other, made inaccessible.

Its not long before you stumble across the first murder within the house, and, after that, the bloodthirsty nature of the adventure accelerates alarmingly. The violence in which these acts are committed only escalates further and further, placing an invisible noose around the neck of the protagonist, marking the inevitable conclusions Trilby and the other occupants face.

Ancient totems, eldritch scribbling that make apparently no sense and dark visions all highlight Trilby's descent into madness, all conspiring to question all the things that he did in his life up to this point and query what might be left of his future. Truly, as the game progresses, it envelops you within its grim world and allows you experience the dread of being a captive within a house where everything goes wrong. Strange noises that have no owner float in the stale air, lines of text that have no coherency to them appear out of the blue, vivid illusions from the memory of the house depicting the life of those that lived here before. All of these will serve as fragments that, when placed together, tell a story which sends shivers down your spine. 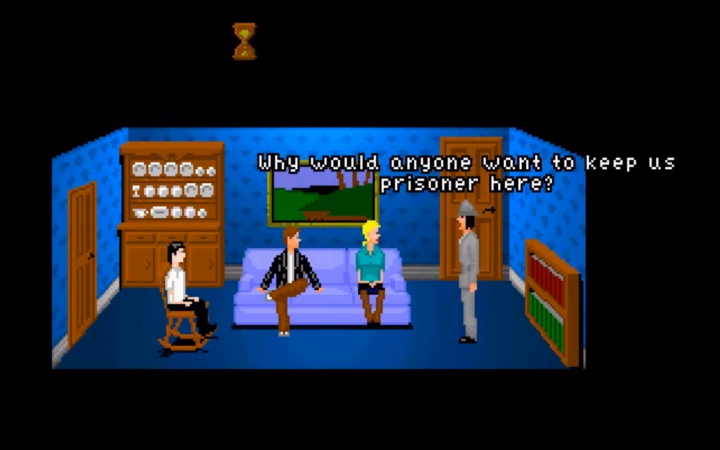 But since 5 Days a Stranger is an ambitious project done in AGS (Adventure Games Studio), a homebrew game-making system that allows us mere mortals to produce the games weve always dreamed of, it didnt have the professional teams the more polished games of the genre do. Since it was done by a single man, its graphical and audio execution is poor, making it less of a modern-day title and placing it firmly in the same vein of the first Monkey Island, which came out in the early nineties. Also the games puzzles are easily solved, ensuring even genre beginners should play through without much difficulty within a single afternoon at most.

However, the interesting script and the cliff-hanger ending which promises a sequel (and then delivers with 7 Days a Sceptic), coupled with a solid atmosphere (one that places many of today's games to shame) that harks back to a time when point and clicks didnt have to rely upon the modern wealth of technological chicanery. Its a free project, downloadable all over the net and easily obtained with just a little searching and I can guarantee that, if you value a good thriller story, you will not be disappointed.
4/5

If you enjoyed this 5 Days a Stranger review, you're encouraged to discuss it with the author and with other members of the site's community. If you don't already have an HonestGamers account, you can sign up for one in a snap. Thank you for reading!

© 1998-2020 HonestGamers
None of the material contained within this site may be reproduced in any conceivable fashion without permission from the author(s) of said material. This site is not sponsored or endorsed by Nintendo, Sega, Sony, Microsoft, or any other such party. 5 Days a Stranger is a registered trademark of its copyright holder. This site makes no claim to 5 Days a Stranger, its characters, screenshots, artwork, music, or any intellectual property contained within. Opinions expressed on this site do not necessarily represent the opinion of site staff or sponsors. Staff and freelance reviews are typically written based on time spent with a retail review copy or review key for the game that is provided by its publisher.