Touhou is a anime shoot em up franchise that gained a huge following in part due to the creators allowing others to have virtually free reign on the franchise. To be honest, I know absolutely nothing else about it, nor do I care to. Touhou Luna Nights is one of those fan games, and happens to be a Metroidvania. Hey, I know a lot about those! So from the perspective of a fan of the world of Gensokyo or whatever, I cannot tell you if this is a worthy and influential addition to the lore. But I can tell you that, while it may not be the pinnacle of the genre, its gameplay is worth it regardless of the merits of the franchise.

But seriously, when I said I know nothing about Touhou, please note that that is present tense, meaning it still holds true AFTER playing this game. If you are expecting this game to ease you into the universe and provide any important backstory, forget about it. Characters come and go with already established mannerisms that you are clearly expected to already know, and nothing is ever explained. But that's ok, because this plot is as light as a feather anyway. Some vampire lady was bored and decided to create an alternate universe castle with bad guys and monsters and stuff for her maid Sakuya to fight through like, well, it was a videogame. While that might seem like it's abusing the employer-employee relationship just a wee bit, nobody seems to care too much. And even though there are twists and shocking reveals (I mean, I guess they were?), there was never any angst or drama about the situation. Suffice to say, if you play Metroidvanias for their story, this game will likely not excite you.

Fortunately, I have no problem with the plot being background noise, and dived right into Sakuya's adventure. It seems a fairly standard Metroidvania - it's a sidescroller with branching, maze-like layouts requiring seeking out the bosses and powerups needed to progress. You will find, fairly quickly, that the exploration and power-up based progression is not the game's strong point either. While there are branching paths, the levels themselves are laid out perfectly in a grid, limiting the locations where breakable walls might lead to powerful secrets. The game is also segmented, with magic keys separating out the different regions of the castle. While you can backtrack to try to find some optional upgrades, it is never a requirement to go back to a previous segment, meaning the game can feel quite linear. And the number of required powerups is relatively small and don't change the game that much. Alucard or Samus control entirely differently at the end of the game compared to the beginning, giving you new ways to jump or fly or attack or whatever. Sakuya gains a few abilities, yes, but only a few critical ones early on and almost everything else feels situational or barely any different. Exploring the castle still feels fun, there is still the sense of the unknown and the thrill of finding a secret, but the exploration certainly isn't the focus here. 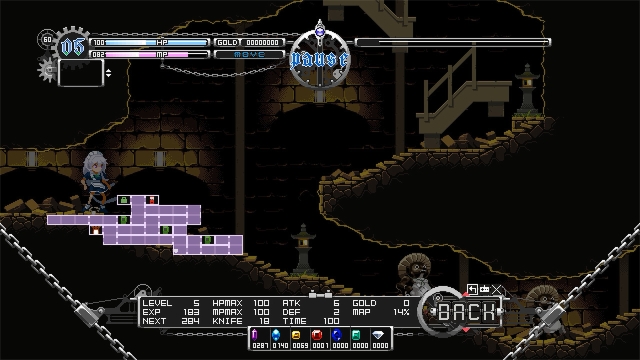 But while the traditional Metroidvania aspects may seem lacking, Sakuya's moveset is unique enough to be worth noting. She doesn't use a gun or a sword or traditional weapons, but rather prefers to throw knives. Lots and lots of knives. Enough to fill a screen with (rather appropriate for a shmup franchise I suppose). These knives don't do much damage individually, but spamming the attack and seeing the knives stick out everywhere is a nice visceral feedback and keeps the combat moving swiftly. And while her knife supply is numerous, it is not quite infinite (although it does regenerate over time), making the mechanics different from your typical shooty game. This makes it so you want to aim and not miss too much, keeping you from spamming like crazy, but even that is mitigated by the fact that you can pick up knives that missed their target. And knives even come into play with other moves like double jumps (she throws knives downward to jump again) and slides.

Oh, and she's also the master of time. Sakuya can slow down time briefly (while she moves at full speed), and can eventually stop time itself (albeit for a limited, uh, time). See, told you her moves are unique! Oh, but her knives also get frozen in time. But what that means is you can pause time, fill the screen with a dozen knives while not worrying about a counterattack, and then unpause time and watch as your hapless foe suddenly comes face first with a torrent of blades. Eventually, you can even jump on top of your knives to reach new areas. So these two mechanics - the knife-based combat and stopping time, end up working in synergy as you move through the castle.

Speaking of synergies, there are no health recovery items dropped by enemies (although there are places to replenish said health, often near save spots). Instead, we have the graze mechanic. If a foe or bullet or whatever comes near you but doesn't actually hit you, you can absorb some health and MP (your knife meter, basically) from them. This comes in handy, as your health honestly doesn't go very far, even with upgrades and improved levels. But that's easy, just stop time and walk next to them, right? Nope, if time is paused, you absorb more time instead. This creates some tension, as you must decide whether to play it safe and pause time at the loss of health regeneration, or try to dodge attacks in real time and replenish your life if you play well. These elements - the knives, the time, and the graze - basically all work to make the act of moving through the castle fun and fresh throughout the entire experience. 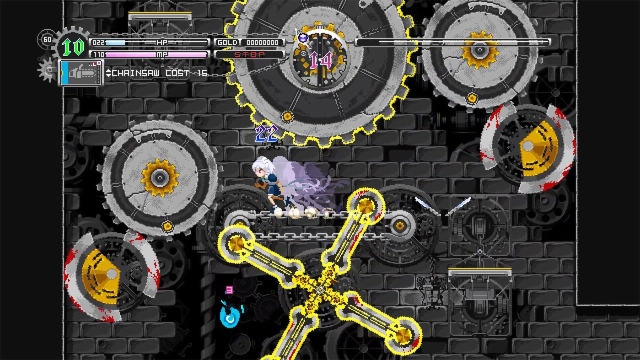 Naturally, the game is built around these elements, and it's done well. Combat can be brutal (it starts out tame, but ramps up fairly quickly) and health is limited, so making the best of your abilities is a must. There are some time-related puzzles, mostly around water (water will freeze when time stops, which can let you walk on it but also means waterfalls will block you). There are also some color-coded enemies and obstacles that, when time is stopped, will either start to move, continue to move, or reverse direction. So you may have to use this to navigate some hazardous areas with swinging blades or whatever. And all of that is just a warm up to the main course: the bosses. Well, actually, the bosses in the latter half of the game.

Remember, this franchise started as a shmup filled with anime girls. Well, the anime girls are now the bosses. And instead of the typical sidescroller pattern-based bosses of dodge-dodge-dodge-attack (how would that work when you can stop time whenever you want?), these are flat out bullet hell bosses. Yes, there are still patterns. Yes, there are obvious points you need to dodge. But the game just blasts so much stuff at you that you can't rely solely on your time stopping abilities. This is especially true since, with the bullet hell nature, NOT using your time and grazing all the attacks will essentially completely restore your health. Also, some of those "continue moving while time is stopped" bullets are present. As are the "ONLY move when time is stopped" ones. And bosses have a TON of HP, but they need it since you also have a ton of knives at this point. So dodge-dodge-pause time-fill screen with knives-dodge-graze-pause-knife-repeat. It makes full use of your skills, and oh so satisfying when you recover all your health thanks to the bullets flying by you or when 100 knives end up in the face of your foe.

And that is why this game is still worth playing, even if you aren't a Touhou fan. Sure, the game is fairly short and fully segmented more than a Metroidvania should be, but the movement and combat is oh so fluid. While the ability to stop time may seem like it would make any challenge trivial, the enemies and obstacles and bosses are all built with it in mind. The graze mechanic is unique and provides a benefit to playing riskier than one normally would. Sure, I still have no interest in the franchise, but I wouldn't mind playing this one again and again.

If you enjoyed this Touhou Luna Nights review, you're encouraged to discuss it with the author and with other members of the site's community. If you don't already have an HonestGamers account, you can sign up for one in a snap. Thank you for reading!

© 1998-2022 HonestGamers
None of the material contained within this site may be reproduced in any conceivable fashion without permission from the author(s) of said material. This site is not sponsored or endorsed by Nintendo, Sega, Sony, Microsoft, or any other such party. Touhou Luna Nights is a registered trademark of its copyright holder. This site makes no claim to Touhou Luna Nights, its characters, screenshots, artwork, music, or any intellectual property contained within. Opinions expressed on this site do not necessarily represent the opinion of site staff or sponsors. Staff and freelance reviews are typically written based on time spent with a retail review copy or review key for the game that is provided by its publisher.