Pic-a-Pix Deluxe is a picross game. Maybe you have played and enjoyed one of those in the past (I confess to loving the heck out of Picross 3D on the DS, myself). If you have prior experience with the format, you already know nearly everything you need to know to decide whether this newest Switch title from Lightwood Games is likely to interest and perhaps even delight you. The title offers basic but competent presentation of the popular visual puzzle style, coupled with repetitive but addictive play. It's a great value for the relatively little money it will cost you to make it yours.

Everyone defines value differently, so let me elaborate on what I mean by a "great value." When you click "Play" from the main menu, you are presented with 150 standard puzzles. Included in that number are a selection of fairly simple challenges that can usually be cleared in five minutes or less, as well as more demanding puzzles that may take an hour or more (depending on your skill level, of course). My estimate is that the initial bundle will keep most players busy for around 15 to 20 hours. From launch, the game also includes an "Extra" option. You can click to view additional puzzle packs you have downloaded from the Nintendo eShop. The first pack is already included and features 150 black and white puzzles, bringing the total to 300. That's a lot of puzzles for only $7.99 USD. It's unclear how many additional puzzle packs might eventually be added down the road, but at present you can already download a "color" pack for $3.99 USD. It boasts an additional 150 puzzles. 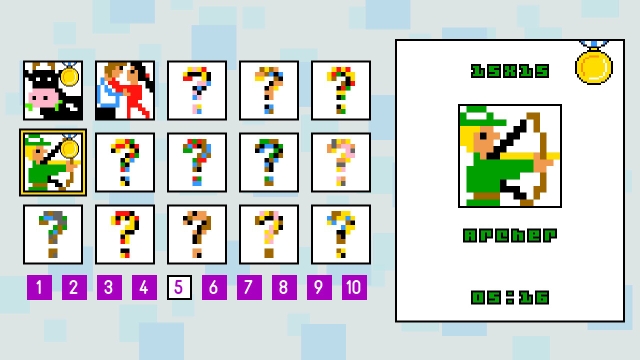 The interface that allows you to access each puzzle is simple and effective. Scrolling over the selections, you will see information about the size of the puzzle. These range from as small as 5x5, to as large as 35x25. If you have already cleared a particular puzzle, your best time and a picture of the finished image are also provided. If you cleared the puzzle without using assistance features, a medal is shown. This makes it easy to challenge yourself to improve, though leader boards are not available. It's a personal thing.

When you begin working on whatever puzzle suits you (I was grateful to find that I didn't have to clear the easy ones to access the more challenging ones), a timer starts ticking away the seconds. There's no time limit, though. Pic-a-Pix Deluxe isn't that sort of game. If you're having trouble making heads or tails of things, you can also press the Y button to erase any errors you may have made (which then prevents you from earning a medal on the stage). That's a welcome feature for newcomers, who may otherwise run into frustration as they wrap their heads around the general picross concept. An easily accessible series of tutorial pages also fills you in on the rules of the game and offers some helpful tips, in case you need them. 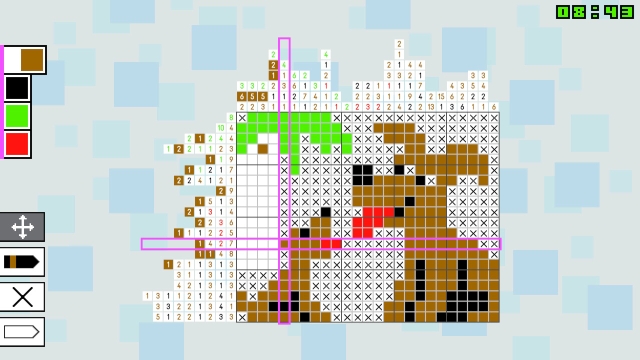 So, just what is picross? Picture a sheet of graphing paper, comprised of numerous small squares. You place colored tiles within the space provided to produce a pixelated picture of a simple object, such as a dog or an American football player or whatever. To solve the puzzle, you must rely on clues, which are presented in the form of colored number tiles positioned at the top and left side of your play area. These tiles let you know how many tiles of a particular hue to place in a column or row, but you mostly have to figure out anything beyond that on your own, using basic logic to eliminate placements that obviously won't work (for example: you see that you have to place three consecutive brown tiles, but the top portion of your column doesn't have more than two consecutive spaces available, so you mark those squares as unused and place the cluster closer to the bottom). The game does offer some helpful visual cues that let you know when your current placement appears to have satisfied conditions attached to the corresponding row, though you shouldn't take that as gospel. All it really tells you--for example--is that you placed two brown and three green tiles somewhere along the row, as technically required. That placement could still be dead wrong.

When you're playing a picross game, the quality of the puzzles matters a lot. The puzzles included in Pic-a-Pix Deluxe were developed by a group called Conceptis Ltd., which on its official site bills itself as "the leading supplier of logic puzzles to printed and electronic gaming media." That might well be true, but the puzzles presented here are all over the map in terms of difficulty. Some I was able to clear with little trouble at all, while others had odd spacing that slowed me down considerably. Then the next puzzle in the group would be easy again. Some of the fits and starts surely come down to my gradually improving comfort level with the interface and required concepts, but I still believe difficulty scaling could have been handled a bit better. 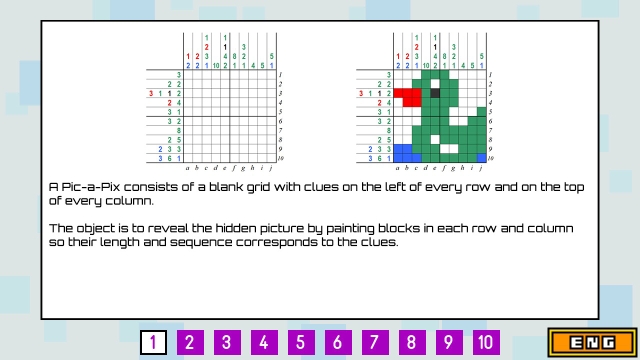 In addition to seeming a bit uneven at times, the puzzles are really good at looking like almost nothing you've ever seen until you have placed very nearly the final tile. So that makes it difficult to recognize an image and use a little guesswork, the way you might in a similar game such as Piczle Lines DX (which was made by a different developer and offers some innovative twists that modify and build on the classic picross concept). A few of the images presented here are drawn very badly indeed, such as the "Pilot," which looks like two hot dogs positioned vertically with a random bit of relish strewn across them.

Pic-a-Pix Deluxe doesn't offer a lot of frills and thrills, but it gets the job done. If you're into picross puzzles, the opportunity to snag 300 of them for less than $10 USD is a good one. The effective presentation and user features also go a long way toward providing an experience that is satisfying, even if the package is a little on the plain side. Recent Nintendo systems have played host to a variety of picross games in recent years (there's a whole series of them available for 3DS from Jupiter Corporation, and Lightwood Games released a previous version of Pic-a-Pix for that same device), and the trend looks likely to continue well into the Switch's life cycle. So there's no hurry, really... but Pic-a-Pix Deluxe is a terrific option if you want a slew of picross puzzles for your Nintendo Switch right now.
3/5

If you enjoyed this Pic-a-Pix Deluxe review, you're encouraged to discuss it with the author and with other members of the site's community. If you don't already have an HonestGamers account, you can sign up for one in a snap. Thank you for reading!

© 1998-2020 HonestGamers
None of the material contained within this site may be reproduced in any conceivable fashion without permission from the author(s) of said material. This site is not sponsored or endorsed by Nintendo, Sega, Sony, Microsoft, or any other such party. Pic-a-Pix Deluxe is a registered trademark of its copyright holder. This site makes no claim to Pic-a-Pix Deluxe, its characters, screenshots, artwork, music, or any intellectual property contained within. Opinions expressed on this site do not necessarily represent the opinion of site staff or sponsors. Staff and freelance reviews are typically written based on time spent with a retail review copy or review key for the game that is provided by its publisher.