Nintendo hit a home run with Super Smash Bros. almost 20 years ago, and its surprising so few companies have tried to give their intellectual properties similar crossover treatment. That could be due to how difficult compelling fighting games are hard to make, especially when you have to balance so many characters from disparate franchises. But Koei Tecmo has its own genre and IP to exploit, and that's exactly what the company does with Warriors All-Stars.

Warriors All-Stars is the latest Musou game from Koei Tecmo. It takes characters from the companys stable of franchises and throws them all together in a big crossover plot that pits Ninja Gaiden and Dead or Alive against Atelier and Toukiden. Its a great idea, expanding on the companys previous Warriors Orochi franchise that largely only pulled from the Dynasty and Samurai Warriors games. With All-Stars, Omega Force was able to get really creative with characters that shouldnt belong in a Musou game, and the result works well. 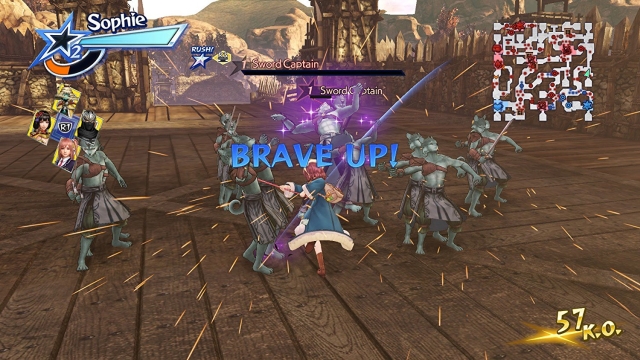 Like a lot of fan fiction, Warriors All-Stars begins by revealing a priestess on a dying planet who calls upon heroes from other worlds to help revive the four springs that will bring life back to the inhabitants of her world. The summoning ceremony is botched, however, and sends heroes all over the world, where they join forces with one of three factions warring over who will take the throne and control the world restoration process. Players choose one of 12 characters with which to start, a decision that impacts whose side in the war they fight for. Its not a thrilling narrative by any means, but it does provide plenty of reason to play through again with one of the other factions (especially since there are multiple endings available for each one).

Of course, any crossover game is only as good as its selection of characters, and Warriors All-Stars stumbles a bit in that regard. Though the major current Koei Tecmo franchises are represented, the developers unfortunately decided to relegate some of the company's lesser known franchises, like Rygar or Mighty Bomb Jack, to item drops and BGM tracks only. Some other beloved franchises, like Gitaroo Man, are completely absent. Thats a real shame because their inclusion would have helped Warriors All-Stars become a true love letter to Koei and Tecmos shared history. As it stands, the game will only appeal to the nostalgic side of those who love the companys most work over the last 10 years or so. 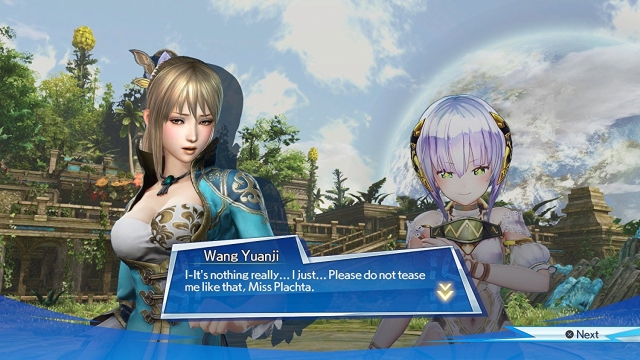 To make up for its middling franchise inclusion, however, Warriors All-Stars features great map design and progression. After completing the tutorial map, players are taken to a map hub where they can freely choose their encounters from simple "take a base" maps to more challenging maps where every combatant dies in one hit. The freedom to choose the map types is liberating, and really feels like an evolution of the excellent adventure mode featured in Hyrule Warriors. As for the maps themselves, they include bases that bestow specific buffs on the friendly force. Some bases provide attack or defense boosts, while others will fire arrows on enemy strongholds to facilitate easier capture. The ever changing objectives, combined with fighting over base buffs, help to make almost every encounter meaningful.

In combat, each character has a standard weak and strong attack that can be combined to clear numerous enemy combatants from the field. Players also have access to the Hero Chain and Musou Fever to help turn the tide of battle in their favor. Hero Chain allows players to take control of another warrior in their party for a brief period while the main hero fights alongside them. This can be done up to four times, with a line of five heroes momentarily fighting in unison. Musou Fever, on the other hand, increases the number of enemies on the field ten-fold while also making their weapons appear as glow sticks (as if in a rave). During this mode, partner characters cheer on the main hero as they decimate forces. Its very silly, but totally appropriate for a crossover game where Arnice from Nights of Azure is teamed up with Ryu from Ninja Gaiden. 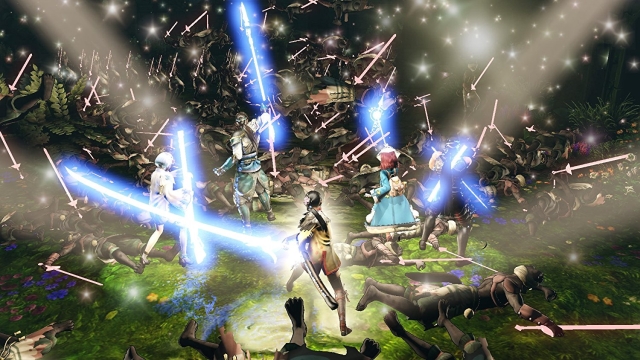 When players aren't engaged in battle, they can retreat to the central camp where characters mingle. A lot of the interactions are very fan service-y, with like characters from different franchises discovering the similarities they share with their newfound companions, which serves to increase friendship rankings between characters and allow for more powerful combination skills during battle. Its here that players can also raise the levels of unused characters through training, or add additional abilities by equipping cards.

I really like Warriors All-Stars. I might even love it, but its undeniable the title caters to fans in an incredibly small strike zone. Not only is it a Musou game, which has limited appeal, but its cast of characters could have benefited greatly from delving deeper into Koei Tecmos back catalog. Im still upset there isnt even a hint of Monster Rancher to be found. With that being said, Warriors All-Stars is an excellent Musou experience and will definitely hold over fans until Dynasty Warriors 9 and its many promised innovations hit next year.
4/5

If you enjoyed this Warriors All-Stars review, you're encouraged to discuss it with the author and with other members of the site's community. If you don't already have an HonestGamers account, you can sign up for one in a snap. Thank you for reading!

© 1998-2020 HonestGamers
None of the material contained within this site may be reproduced in any conceivable fashion without permission from the author(s) of said material. This site is not sponsored or endorsed by Nintendo, Sega, Sony, Microsoft, or any other such party. Warriors All-Stars is a registered trademark of its copyright holder. This site makes no claim to Warriors All-Stars, its characters, screenshots, artwork, music, or any intellectual property contained within. Opinions expressed on this site do not necessarily represent the opinion of site staff or sponsors. Staff and freelance reviews are typically written based on time spent with a retail review copy or review key for the game that is provided by its publisher.