You'll see Super Panda Adventures as I did for sale on Steam and assume that it's utter rubbish. More bargain bin shovelware, from developers hoping to cash in on a trend towards everything nostalgic, and on the fact that no one these days can resist a rock bottom sale (it's only two dollars!). But then you'll notice that on Steam the game has an overwhelmingly positive rating. And so you'll wonder if people are just giving positive reviews ironically, and maybe the sarcasm has snowballed into some sort of cult phenomenon. And youd be wrong.

Panda, which was apparently the work of just one man, earned those positive reviews -- MS Paint-like graphics be damned. You definitely wouldn't know it at first blush, but it offers a deep, engaging and rewarding side-scrolling quest that just happens to tell its tale using simplistic -- or dare I say it: crude -- graphics. So if you don't let the presentation turn you off, youre in for a treat; I actually enjoyed this adventure more than I did much more polished and hyped metroidvania fare that I've played of late (I'm looking at you Iconoclasts!) 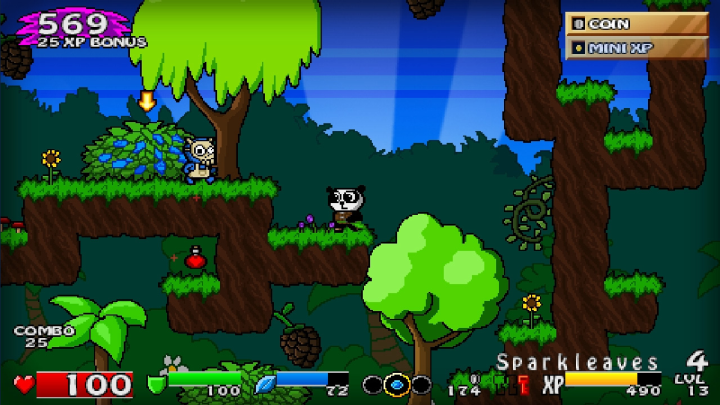 Pandas remarkable tale goes like this: Robots are taking over and trying to turn the natural world into a cold one populated by machines! Okay, wait. So the story is nothing new, and is actually, objectively bad. But that's not where the game earns its stripes. The game mostly succeeds because enemies can absorb a lot of hits, and our earnest hero is an absolute savant at inflicting stylish, varied damage. Games like Cally's Caves offer similarly quaint, colourful graphics and platforming devoid of dangerous falls but fraught with bullet sponge foes -- but they don't get the second part right. For Cally, and others like her, the killing isn't nearly so slick or so enjoyable.

And theres so much joy in the killing. Panda wears armour, blocks attacks with a shield, wields a sword, flings a boomerang shuriken, and commands magic. In a single sequence, he might magically freeze an enemy, loose the shuriken like Simon Belmont's cross, then rapidly hack and slash the immobilized enemy with his sword, and finally block an incoming strike just as the hapless foe shakes off the freeze spell and retaliates. There's no more rewarding thing in the game, than when you take down a very powerful enemy, while using all of your skills in concert -- not by choice for style points as some games allow, as window dressing loses its appeal -- but out of necessity. 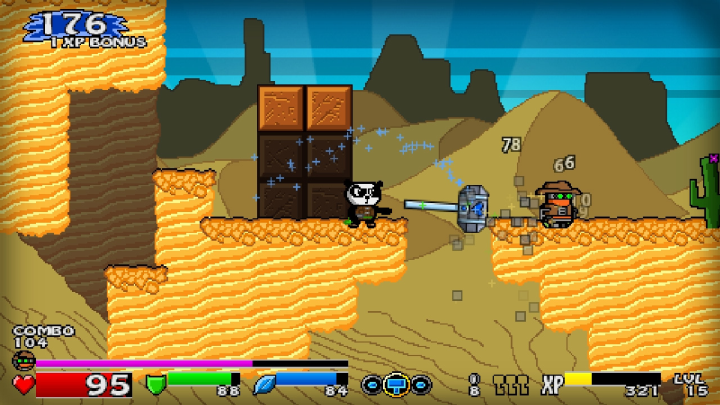 Of course, with this being a metroidvania, there are attributes youll need to unlock to ensure later progress, which here tend to be limited to genre staples: like the double jump and the ability to swim. Panda offers upwards of 10 hours of robot bashing action. It is at its best when its silly NPCs are sending you all around the world map, from area to area, on charming little fetch quests, which in the hands of another game could rightly be considered annoying. But here they are just fun little missions, which allow you to do more slicing and dicing, more exploring, and more leveling up as you delve deeper into Pandas at once hackneyed and whimsical tale.

Truth be told, I loved the time I spent with this game. I think Ive made that clear. But if Im being honest, its not perfect, and its issues are with its level up system. The areas themselves offer a fair balance; when you unlock a new area on the world map, youll be adequately powered up to tackle it. 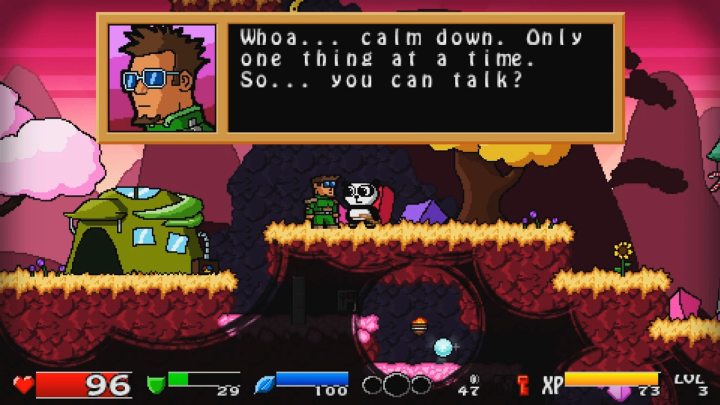 The problem is with the bosses who, as the game progresses, become ridiculously overpowered and tend to sport enormous hit counts. There are a few ways to circumvent this issue. You can of course, grind for kills, dipping in and out of already visited areas so that you're able to level up to a sufficient degree. Or! There is another trick. You can try to arrange it so that as you begin the boss fight in question, youre maybe halfway to leveling up. Then, as you battle gamely against that boss and find yourself dying, hopefully youll have done sufficient work to level up while in the fight, and voila: instant health replenishment. Its a janky sort of unintended life extension and it's cheating the system a little, but truth be told, the challenge the bosses provide in the later stages deserves being cheated.

And with that said, Super Panda Adventures has no other known weaknesses... that matter. Presentation is barebones, the story is bad, but in the end, those shortcomings seem to come around to double down on the packages charm factor. Its got memorable tunes that stick in your head and funny NPCs who have you running about like a chicken with its head cut off and youll love it. It's not too easy, and not too hard (outside of your having to cheese later bosses). You will thank yourself for trying out this unsightly curiosity that probably looked like it had no business being in your game library.
4/5

If you enjoyed this Super Panda Adventures review, you're encouraged to discuss it with the author and with other members of the site's community. If you don't already have an HonestGamers account, you can sign up for one in a snap. Thank you for reading!

© 1998-2020 HonestGamers
None of the material contained within this site may be reproduced in any conceivable fashion without permission from the author(s) of said material. This site is not sponsored or endorsed by Nintendo, Sega, Sony, Microsoft, or any other such party. Super Panda Adventures is a registered trademark of its copyright holder. This site makes no claim to Super Panda Adventures, its characters, screenshots, artwork, music, or any intellectual property contained within. Opinions expressed on this site do not necessarily represent the opinion of site staff or sponsors. Staff and freelance reviews are typically written based on time spent with a retail review copy or review key for the game that is provided by its publisher.