One of this years greatest tragedies--besides the actual tragedies that you hear about in the news, I mean--is that Dragons Crown, a well-executed fantasy brawler that is among one of the most engaging Ive ever played, is likely to be remembered almost exclusively for a pair of swaying boobs.

Dragons Crown was announced a long time ago. Its the latest project from Vanillaware, the team behind magical previous outings such as Odin Sphere, Muramasa: The Demon Blade and GrimGrimoire. All of those titles featured lush visuals, and the general look they employed has returned for your continued enjoyment on PlayStation 3 and Vita. There are gorgeous backgrounds everywhere you look, some of the most beautiful youre likely to ever see in a video game, and yet people cant stop talking about the sorceress. 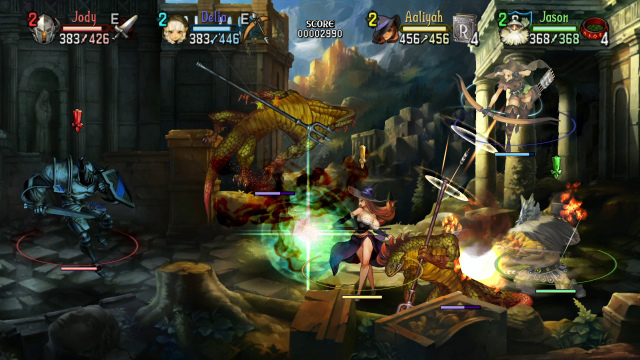 So I guess Ill talk about the sorceress, who is just one of several characters you can choose as you start your Dragons Crown adventure. Shes rather tall, with a pointed hat and the sort of attire that manages to cover a lot of skin without actually tending to her boobs. Thats a big problem that people have with the game, and one that is exacerbated by the fact that her bosom is cartoonish where mass and movement are concerned. As the sorceress runs, or as she casts the lethal spells that are another reason someone might choose that particular class, the softer parts of her upper half drift all over the place like helium balloons caught in a cyclone.

To be fair to artist George Kamitani, the bulk of the characters in the game are drawn with similar disregard for actual proportions. The male characters look like their chests were constructed from a map of Africa turned sideways, and many of them wear so much armor that you wonder how they manage to pass through a doorframe. Dragons Crown employs a very specific art style, one that I dont find offensive--or titillating, for that matter--because its all so very silly and exaggerated. To be fair to the people who hate the art style in spite of that, though, its almost always the ladies who have trouble finding something suitable to wear before they embark on a grand adventure. If for whatever reason the sight of a near-naked womans body makes you extraordinarily uncomfortable, so too will Dragons Crown. Theres just no getting around it.

So, just what do you get as a reward for overlooking the boobs? The answer, it turns out, is an enjoyable romp through fantasy tropes that include nefarious wizards, mythical creatures on the rampage, heroic knights, and even damsels in distress. What makes it all so enjoyable isnt the fact that we get to cover all of that familiar ground once more. Rather, its the commitment to that approach, along with those beautiful graphics I mentioned and a surprisingly addictive character development system. 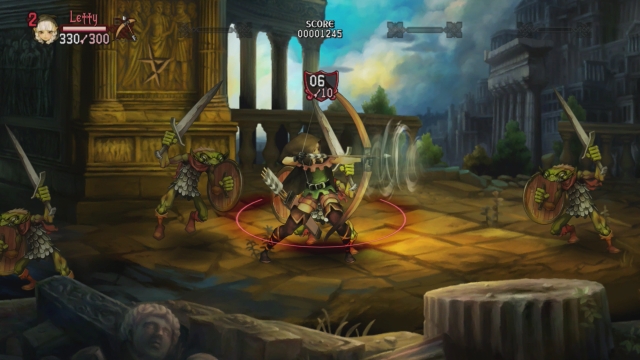 Your game begins as you choose from one of several characters who are gathered around a table at an adventurers inn. When I started playing with my friend, I went with the elven archer girl, because she looked likely to be a quick character with a weapon that could allow her to pick off foes from a distance. I like that in my heroines. I also tend not to favor the melee types, so most of the numerous male characters were out of the question unless I wanted to be a wizard. My friend picked the sorceress and I wanted to see some variety at work.

Characters evolve over the course of the game in the manner that you see fit. Every character has the same basic skill tree that includes precious abilities of general usefulness. You can pick up extensions to your life meter, for instance, or you can gain the ability to restore more health from food consumption and the like. Your specific class also has unique abilities. As the sorceress, my friend was able to conjure up life-restoring fruit and bread at his command (an exceedingly useful skill). My archer was able to improve the power of her kick attacks based on the boots she equipped. Also, as you might expect or hope, those abilities can be further improved the more you put them to use and the more you level them up, once you satisfy certain requirements.

Dragons Crown also gives you ample reason to collect loot. As you wander throughout the various stages that are accessible from the main hub, you can find treasure in chests. When you take that back to town, you can pay to appraise it and then either equip it or sell it. Weapons sometimes grant additional attributes, depending on their ranking. You might gain better resistance to knockbacks, or more attack power or health. There are requirements that must be met before you can equip any new gear, and you also have to be careful because that fancy new rod or set of spectacles can wear down over time and may even break if you dont make frequent stops at the appropriate shop back in town. A second run through a given area doesnt have to be only about picking up more goodies, either; each of the nine main areas also offers side quests and secondary missions, some of which reward you with beautiful artwork. 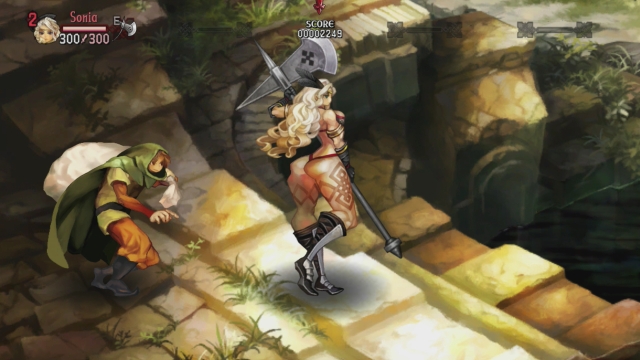 Thanks to the character customization options and the visual trappings, Dragons Crown is able to do a good job of preventing you from noticing (or at least caring) that youre otherwise playing a fairly standard brawler. There arent a lot of unique areas, but each one is lengthy enough and pretty enough that you probably wont mind visiting many times. Youre also able to bring along companions, once you find their bones and take them back to the temple for a quick resurrection, and it definitely helps to have some AI along for the ride, if only so your enemies have to choose from multiple targets. Later in your adventure, you can even choose to allow strangers to play with you online, which is a nice touch that my friend and I ignored because local cooperative play was plenty fun all by itself.

Though we enjoyed that option, Dragons Crown could have done still better when it came to implementation. We accepted a side quest, for instance, then completed it and found that only one of us received any credit. When going through the game cooperatively, both players must separately enter each establishment and accept the side quests they plan to complete--which requires some coordination--and they both must repair their gear separately and enter the guild separately if they want to assign skill points to their builds (which requires patience because its tedious). Late in the game, we also found ourselves spending far too much time worrying about our finances, since it quickly grows expensive to embark on a quest that will necessitate a visit to the blacksmith to repair your damaged gear.

Dragons Crown ultimately doesnt provide the sort of experience youve never had before, particularly if youve played a lot of fantasy brawlers or action-RPGs throughout the years, but it offers enough content to likely keep you busy for 20 or so enjoyable hours on a single trip through the proceedings, and perhaps much more. There are a bunch of minor flaws I might point to, but overall I found myself having a great deal more fun with the game than I anticipated. I was always happy to play it some more, even if Id already been at it for a few hours. The game isnt apt to win the genre any converts, but it would be a mistake to assume that theres nothing more to it than button mashing and boobs
4/5

If you enjoyed this Dragon's Crown review, you're encouraged to discuss it with the author and with other members of the site's community. If you don't already have an HonestGamers account, you can sign up for one in a snap. Thank you for reading!

© 1998-2020 HonestGamers
None of the material contained within this site may be reproduced in any conceivable fashion without permission from the author(s) of said material. This site is not sponsored or endorsed by Nintendo, Sega, Sony, Microsoft, or any other such party. Dragon's Crown is a registered trademark of its copyright holder. This site makes no claim to Dragon's Crown, its characters, screenshots, artwork, music, or any intellectual property contained within. Opinions expressed on this site do not necessarily represent the opinion of site staff or sponsors. Staff and freelance reviews are typically written based on time spent with a retail review copy or review key for the game that is provided by its publisher.