Sky Force Reloaded reminds me more than a little bit of Raiden. Both games feature futuristic, military style vehicles, duking it out over war torn terrain. But Reloaded doesn't play anything like that long running vertical 2D shooter series. It isn't manic; bullets arent coming at you fast and furious. And it definitely isn't in the bullet hell vein, as there is nary a projectile sheet here. The way you are expected to dodge enemy fire and return in kind, is decidedly old school, and thats a welcome thing. The way you must progress through the game however, is decidedly not old school, and thats a questionable thing.

The developers of the Sky Force series, Infinite Dream, have a long pedigree of crafting titles for mobile platforms. Reloaded itself began life in 2006 on the Palm OS (remember Palm Pilots? No?), before traveling to iOS a few years later, and then to the Sony PSP. A third Sky Force game, called Sky Force 2014 (guess when it came out?) ostensibly revived the sleeping franchise, as it was received well enough that it was updated and re-released as Sky Force Anniversary on iOS and Steam, and the spit-shined Reloaded looks like its set to keep the ball rolling. 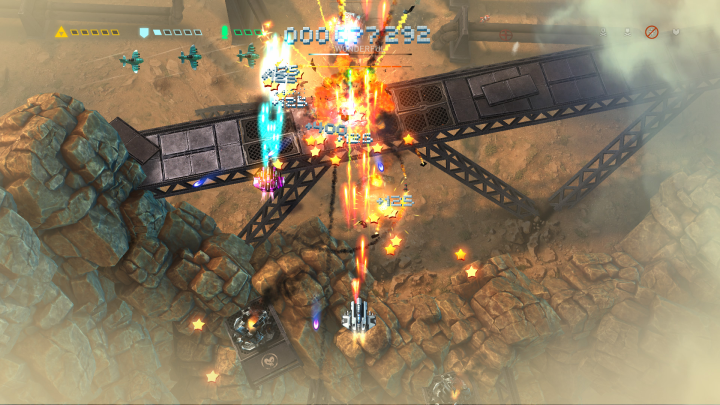 Finding out Reloaded was once a mobile title was definitely an a-ha! moment for me, and that has nothing to do with presentation. Its not even that the series has subscribed to the shameless pay-to-win model outright, but you can see where paying would definitely help ease the grind. This is because, Reloaded in particular (and the Sky Force canon in general), is not about powering up within each stage; its about powering up from stage-to-stage. And that requires earning enough scratch, here in the form of stars dropped by vanquished foes, towards buying upgrades for your default gun, and unlocking more weapons: homing missiles, and one-time use lasers, shields and bombs.

Welcome to the grind. Its fun-crippling, and its two-fold: for starters, you'll find that getting powered up adequately is very expensive. But complicating matters is the fact that you must also earn your way through the levels, and that task too, is costly. Thats right: beating level five, it seems, is no longer enough to earn access to level six. Access to every stage is gated, and a certain number of medals must be won on previous stages to permit you the right to play the next one. Every stage has 12 such medals available -- four unique medals to be won across three difficulty levels: normal, hard and insane. Hard tier is not available until every medal has been achieved on Normal, and so on.

The objectives attached to each medal aren't particularly creative: rescue every prisoner with your tether, take no damage, kill 70% of your enemies, and kill all enemies. Without even playing the game, you can probably surmise that the objectives get in each other's way, too. It's tough to rescue everyone who needs rescuing, while also killing everyone who needs killing on the same run.

You can see where this leads, cant you? You'll be returning to the same stages over and over, until you can claim enough in-level accolades to unlock later levels, and, while you're at it, youll be earning valuable stars so that you can buy those coveted power ups. There are only 13 stages in Reloaded, but the game feels much, much longer than that. If only things were less expensive: if only fewer medals were required to unlock stages, and if only fewer stars were required to unlock upgrades. Then we might really have something here. 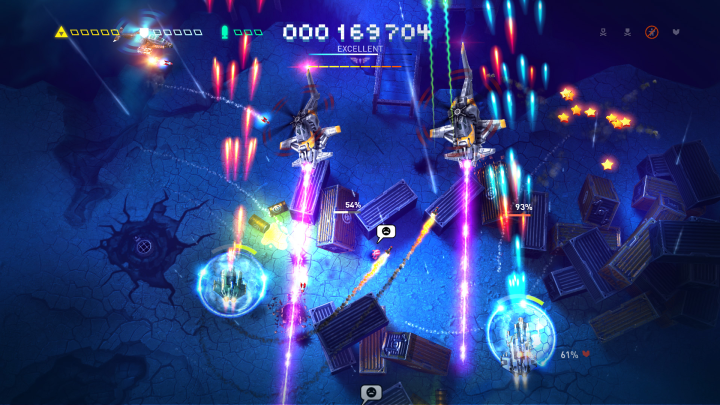 Instead, what we have is a stylish-looking take on Raiden, unassisted by forgettable music, and a campaign whose progression model is both surprisingly addictive and unsurprisingly tedious. The art style reminds me of Sine Mora: an attractive meshing of cartoonish with hyper realistic. It's definitely a pleasure to look at from a design standpoint. That said, despite the initial coolness factor, the levels are actually fairly nondescript. You will have a difficult time describing any given stage to someone who hasn't already seen the game. And the tunes are what can best be described as muted -- certainly not what youd expect from a genre which usually thrives on bombastic techno, or raging electric guitar.

I appreciate the mere fact that Infinite Dreams brought their flagship shooter series to Steam, but it seems as if Reloadeds upgrade system should have had an overhaul for home-based play, or at least further tweaks to limit the incessant grinding required for less obnoxious progress. It's not that Reloaded is a difficult game; I seldom died because of some irksome bullet pattern coming my way. Usually your death will be down to your weapons inability to eliminate even the feeblest enemies. You know that wave of four enemies that comes at you in almost every shooter? The one whose leader drops power ups if you take out the whole chain? Well, in Reloaded you'll encounter situations where your gun will have to connect multiple times to bring down just one of those guys. All too soon, your screen will be cluttered with pesky foes who should have fallen to your guns and did not, and so, youll chip away ineffectually until their number becomes legion and their bulk and bullets crowd the screen and only death remains.

And yet... as much as Ive disparaged Reloadeds grind, it facilitates something that for this is genre is unheard of, and that's true accessibility. The shmup genre is one which has historically kept less skilled players from tasting any real success -- certainly, the glass shooter ceiilng is real. Reloaded allows you to practice early levels, while working away at your medal count, and while saving enough money to upgrade your ship such that more difficult later levels will fall to your sheer firepower, and dogged perserverance. Can't beat level eight no matter how hard you try? Every failed foray will accrue wealth towards building a better and better ship until you are more than likely able to do so, not just because you have improved with practice but because your ship has improved -- not despite, but because of -- your constant failure. Im hard pressed to think of another shooter this inclusive. And so Sky Force Reloadeds quality is down to your willingness to embrace the grind. In spite of everything else, I was willing. Until I wasnt.
3/5

If you enjoyed this Sky Force Reloaded review, you're encouraged to discuss it with the author and with other members of the site's community. If you don't already have an HonestGamers account, you can sign up for one in a snap. Thank you for reading!

© 1998-2020 HonestGamers
None of the material contained within this site may be reproduced in any conceivable fashion without permission from the author(s) of said material. This site is not sponsored or endorsed by Nintendo, Sega, Sony, Microsoft, or any other such party. Sky Force Reloaded is a registered trademark of its copyright holder. This site makes no claim to Sky Force Reloaded, its characters, screenshots, artwork, music, or any intellectual property contained within. Opinions expressed on this site do not necessarily represent the opinion of site staff or sponsors. Staff and freelance reviews are typically written based on time spent with a retail review copy or review key for the game that is provided by its publisher.