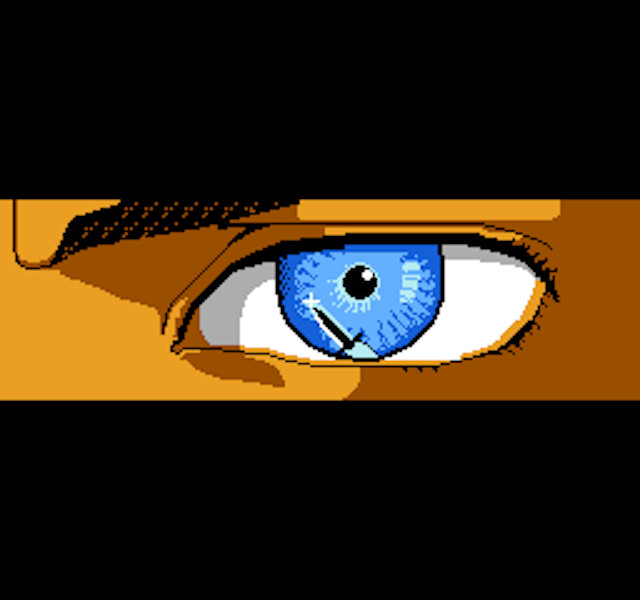 If you've never played the first two Ikari Warriors games, then you owe it to yourself to avoid them. In fact, act like you've never heard of them. Chances are at least decent most of our younger readers haven't, and that's just as well. After a few paragraphs, we're going to pretend we don't know why this game is called Ikari III: The Rescue and say things like, "Whatever happened to Ikari I & II?" It's a mystery...

You see, The Rescue is the high point of its trilogy. And it's pretty dreadful. And clumsy. And awkward. Honestly, in a lot of ways it's just as bad as its predecessors that we're acting never existed, save for two things: it's one of the easiest games on the NES and it's delightfully weird.

The original two games offered horribly unfair, top-down shooter experiences, the second of which came with such stiff play control that you couldn't possibly avoid damage enough to finish the campaign on your own. You had to cheat the system by using the second player to join the battle when player one bit the dust. After the number two gave up the ghost, you grabbed the first controller and started the process anew. That cheap strategy presented the only way to progress through the title significantly without cheat codes. 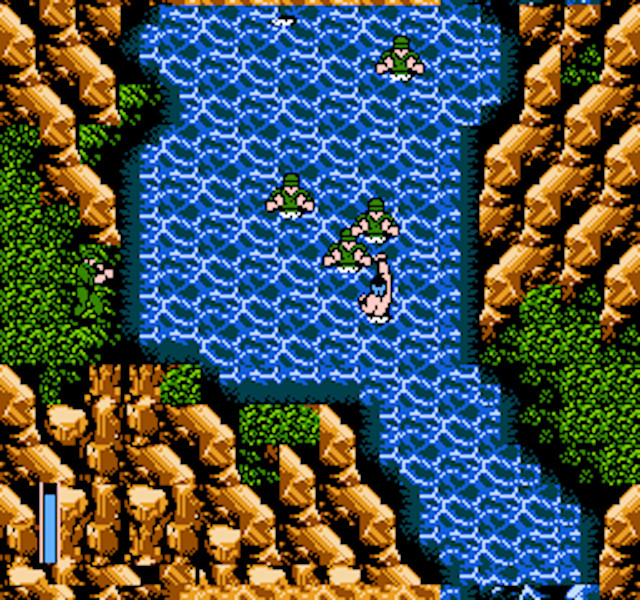 The Rescue cuts through all that nonsense by basically giving you infinite lives. You see, any time you die in this one, you respawn right well you fall. After three croakings, a 'Game Over' screen pops up. Three or so seconds later, the words "Continue" and "Yes" manifest without any numbers anywhere near them to denote a continue limit exists. You press start and recommence your quest right where you perished. During my most recent playthrough, I continued twenty-three times in this manner without ever seeing a final "Game Over."

As you can tell, you will die a lot while taking part in the titular extrication of the president's daughter. This installment eschews the previous two's shooter elements and instead opts for the beat 'em up genre, all while maintaining the top-down perspective from its older brothers. Here, you venture across desert landscapes, into ruined temples, and through terrorist camps while punching and kicking anyone that comes near you. And by "anyone," I mean dancing commandos, boomerang-throwing beefcakes, purple scuba divers, and even soldiers with random objects hoisted over their heads to throw at you. How random, you ask? Their arsenal consists of boulders, explosive barrels, and dead bodies.

Yes, there are troops who traipse onto the screen and launch corpses at you. And this neither a horror game or Super Mario Bros. 2.

A large portion of this adventure consists of arbitrary enemies running onto the battlefield right past you. They might take a choice shot or two, but most of them head for the hills. A single punch drops pretty much any of these dudes. Now and then, though, you'll tangle with guys who look precisely like the weak ones, only they take several blows before they keel over. Yes, this is where the game starts to come apart. For one thing, hit detection proves wonky throughout the affair. You'll see your fist pass through your opponents and not even faze them. Meanwhile, they land shots on you constantly, and even stun-lock you until you die. On the flip side, if you're able to find the "sweet spot" with your fisticuffs, you can easily stun-lock the opposition as well and topple them that way. Even the final boss succumbs after a stun-locking or two. 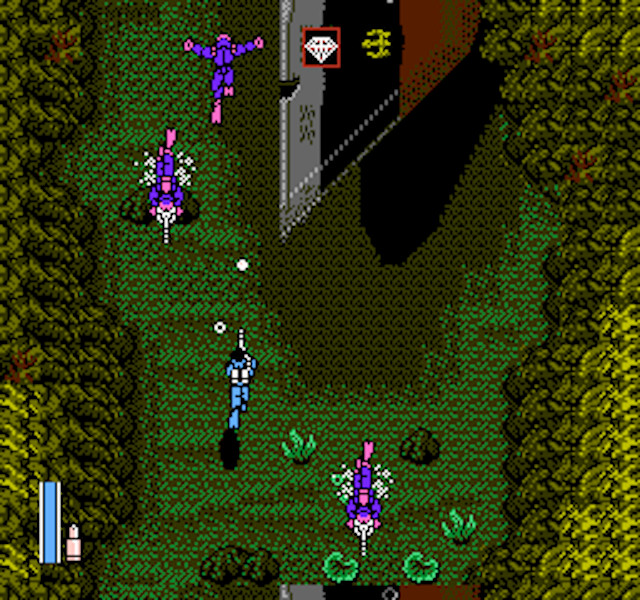 Still, you'll spend a lot of battles repositioning yourself, trying to find just the right place to stand in relation to your foes so you can hurt them. And yeah, you'll expire a lot while trying to do that. But who cares? You have infinite continues and you pick up right where you left off. It's like you're playing with Game Genie, except you're not. I would slate most titles for being this ridiculously simple, but there's no way anyone could manage this undertaking while abiding something like three continues. Hell, you don't even advance far into the campaign before you start bumping into things that easily one-shot you, like a tank boss at the end of the primary stage.

I could easily go on ripping this game to shreds, but the stages on offer come together like some cheesy '80s action flick. The first locale provides standard content, but then level two kicks off with jazzy music and a quartet of green-clad men doing spin-kicks toward you in rhythm with the BGM. You can just imagine an 8-bit choreographer off screen shouting at them through a vintage megaphone, yelling, "Pivot, pivot, pivot, good!" Not long after that, you lock horns with a beefy red dude who jumps around all over the screen, somehow tossing numerous explosives at you. The way he sprawls out as he's hopping creates the impression he's giving birth to the bombs.

And where do we go from there? Into a temple where multiple boulders seek to reenact "Raiders of the Lost Ark" while scouts wait for you to draw near. Once you approach them, they "fight" by repeatedly jumping into the air and spin-kicking in place. After that, you wage a war with a couple of chubby twins clutching sword-and-shield combos. You'll find they, too, easily fall victim to the old stun-lock tactic. 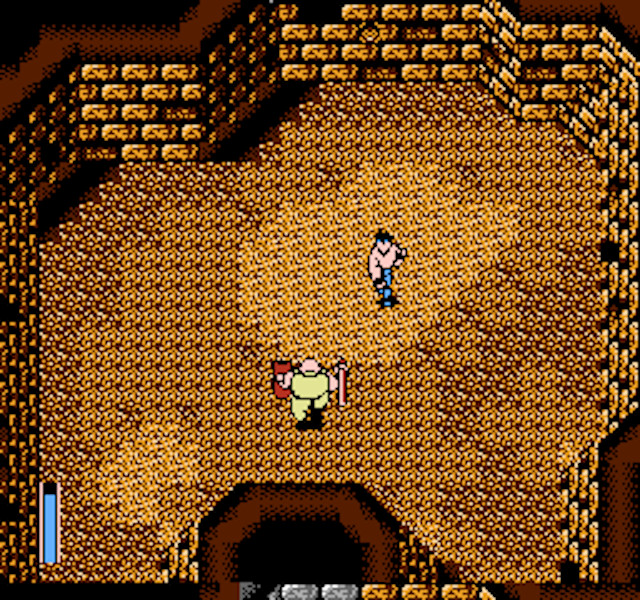 A villain in pink diving gear shoots harpoons at you, and a mop-topped warrior approaches you with a long morning star. To an extent, these segments come across as oddball or "from out of left field." However, they're also memorable moments that keep this title from being entirely stale. Never mind The Rescue's awkward mechanics and seemingly unbalanced barrage of single-hit kills. This is a strange slice of early '90s camp that's nothing if not remarkably silly and somewhat heartwarming.

Part of me really wants another Ikari The Rescue entry, if only so we can get another kooky brawler with more modern production values and (hopefully this time) stable combat. Honestly, if anything the series felt like it found its voice and was about to eventually hit its stride. Maybe if SNK Playmore just pretended the first two didn't happen and they called the next one in line The Rescue II, they could have a fresh, peculiar start. All they need to do is lean into the weirdness and mind the hit detection.

Oh, and keep the infinite continues.

If you enjoyed this Ikari III: The Rescue review, you're encouraged to discuss it with the author and with other members of the site's community. If you don't already have an HonestGamers account, you can sign up for one in a snap. Thank you for reading!

© 1998 - 2022 HonestGamers
None of the material contained within this site may be reproduced in any conceivable fashion without permission from the author(s) of said material. This site is not sponsored or endorsed by Nintendo, Sega, Sony, Microsoft, or any other such party. Ikari III: The Rescue is a registered trademark of its copyright holder. This site makes no claim to Ikari III: The Rescue, its characters, screenshots, artwork, music, or any intellectual property contained within. Opinions expressed on this site do not necessarily represent the opinion of site staff or sponsors. Staff and freelance reviews are typically written based on time spent with a retail review copy or review key for the game that is provided by its publisher.