Despite Metroids being the supposed antagonists in the original, what with their name as the game's title, you don't even get to see these space jellyfish until zero hour; they're the penultimate threat tucked away in a corner of an alien planet, acting as a horde rush of sorts before encountering the big bad leader of the Space Pirates. Metroid, the game, was never really about these life-draining creatures, though, but more about the excitement of exploration, discovering abstract areas, quirky enemies, and secrets. In a way, confrontation with the Metroids was more of a reward than anything else, as if the game was saying you've proven that you could finally face these tricky, floating bastards. 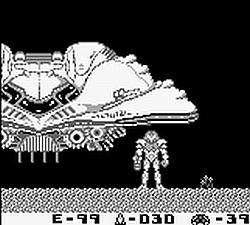 That said, one would think the successor, strangely titled Metroid II, would repeat the magic of exploring unknown depths that players liked about the first release. However, in one of the more interesting cases of role reversal, means of traveling in the sequel is more restricted, and Metroids have come to the forefront as a reoccurring menace. Bounty hunter Samus Aran returns as the protagonist, this time arriving on the Metroids' home planet to eradicate the remainder of the species after several Galactic Federation teams simply vanished. From here, instead of a "free roam" approach of its predecessor, the devs pretty much force you to endure segments of an overall maze in their order, with a pool of acid preventing you from advancing into later territories. And the only way to reduce the acid, bit by bit, is to track down some Metroids in each segment.

But unlike the NES title, these beings aren't jammed in a lone section of the maze; since this is their home world we're talking about, they can be anywhere, and that right there is the charm of Metroid II. This Game Boy release takes advantage of the hardware's "limitations", and instead of mimicking the colorful, otherworldly, adventurous vibe of the original, it attempts to give players a feeling of isolation, dread, and helplessness, since you never know when a Metroid is going to pop up. Contributing to the atmosphere is the powerful use of the soundtrack, as the only upbeat tune you get is when you're in the main area of the maze that connects each segment, with music in other places being very sparse and foreboding. Everywhere else, the game is next to deafening, with "critter" noises cropping in and out of the background.

The lack of color, due to the Game Boy's limited palette of grays and greens, is another, probably unintentional, factor in cementing Metroid II's horror status. Let's not also forget about the handheld's lack of an internal light source, which help give off an awkward feeling. Some players very much disagree with this assessment, though, and consider alternatives like the Super Game Boy and Color's boosted palettes to be a huge improvement. BAH, I say! That's like claiming the colorized edition of The Night of the Living Dead is superior to the black and white version. That's crazy talk! 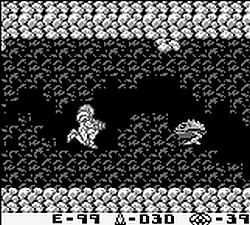 Those that have never played Metroid II are probably thinking, "What's so scary about Metroids?" That's an understandable question, considering in most other Metroid games, while they are dangerous foes that latch on and suck the life out of you, their appearance don't exactly give players the heebie-jeebies. I mean, they're really just red and green jellyfish. However, in Metroid II, you actually have to fight different life cycles of Metroids, most taking on hideous forms, like the Gamma Metroid which resembles a demonic face (though it's drawn like a spider in artwork...), and the Omega Metroid that looks like a skinned, eight-eyed T-Rex. And again, given the lack of color, paints their figures in a sinister light.

Of course, with any game attempting to terrorize poor players out of their mind, you need some pretty good design to make them feel uneasy. In that aspect, I gotta give the dev team some major credit for spooking the crap out of me when I first played Metroid II around the time it came out, and unnerving me again when I returned for another playthrough recently. You see, the game is really effective when it comes to messing with your head, because just as you think you figured out Metroid II's progress flow, it shatters those expectations by doing the opposite, even if so slightly.

Once you discover the first few Metroid shells, you know they're around the corner, in condensed rooms. Or so you think. Eventually, the developers use this one shell sprite as a means to screw with you: sometimes it's sandwiched between two entrances, sometimes you'll see two side by side, sometimes you'll run into a Metroid before the shell, and sometimes you'll have to run a long distance ahead before you spot one. Then you start questioning yourself, how safe you truly feel, if the Metroids are only in areas with no music, and if they'll be standing right in front of you when entering a new area. There are times when the tension gets so thick, that you can't take two steps, jump or land on one platform, without fear of a surprise attack. The "DunDunDUNNNNN!!" jingle when a Metroid springs into action doesn't help, either... That sound cue will startle you at some point, I guarantee. 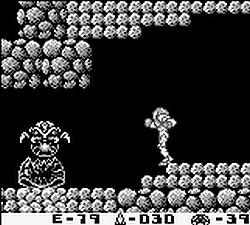 When Metroid II works, it displays pockets of brilliant game design, but when it falters... the game's biggest issue is such a mood killer. Layout-wise, the most polarizing aspect among players about Metroid 1's map is the long platforming segues between rooms. Guess what makes a return in the sequel? Oddly, they feel like a shadow of their former selves here, barely having any resistance which is the opposite of the first. Unfortunately, too, the devs missed a golden opportunity to scare you, as not one single Metroid ever appear during these stairway segments. It's one thing to be a minor nuisance in the first game, but in Metroid II, a title that banked its entire experience on having a creepy atmosphere, the platform sections are the equivalent of some crazy person forcing a cringe-worthy, horribly-written backstory onto an otherwise strong character. That would never happen, but let's pretend for a second.

From fear, to irritation, to fear, and back to irritation, these are the emotions you'll unfortunately bounce between in this flawed classic. It never fails to amaze me that all it takes is a single problem to knock down the quality of a video game considerably, and in this case, it was specific design choices in the map's layout. I'm not saying the game would be drastically epic if the team had taken better care of the map, but it would have been a more smoother ride. Besides that one, aching issue, Metroid II did a lot of bold and ambitious things, especially for a title released during the Game Boy's early years. It's not surprising that many people have yearned for an official remake, and even some people at Retro Studios, of Metroid Prime fame, had shown interest in doing one at some point; the game's clever when it wants to be, has character, and flips the script on anyone expecting it to conform to the NES game's standards, which in turn makes for a refreshing experience.

Until you hit those sore spots.

Now, in a different scenario, I'd declare my disappointment towards the following sequel for not expanding on what Metroid II did, instead wanting to refine the original's template. But considering the next game is Super Metroid.....
3/5

If you enjoyed this Metroid II: Return of Samus review, you're encouraged to discuss it with the author and with other members of the site's community. If you don't already have an HonestGamers account, you can sign up for one in a snap. Thank you for reading!

© 1998-2021 HonestGamers
None of the material contained within this site may be reproduced in any conceivable fashion without permission from the author(s) of said material. This site is not sponsored or endorsed by Nintendo, Sega, Sony, Microsoft, or any other such party. Metroid II: Return of Samus is a registered trademark of its copyright holder. This site makes no claim to Metroid II: Return of Samus, its characters, screenshots, artwork, music, or any intellectual property contained within. Opinions expressed on this site do not necessarily represent the opinion of site staff or sponsors. Staff and freelance reviews are typically written based on time spent with a retail review copy or review key for the game that is provided by its publisher.