By the early-1990s, Kunio-kun and his supporting cast of Japanese high school delinquents have appeared in a diverse library of beat 'em up and sports-related titles, some of which have been released in English under various name changes. However these games are instantly recognizable as belonging to the series due to their trademark chibi sprites imposed on characters; River City Ransom, Crash 'n' the Boys, and Nintendo World Cup to name a few. The developers, Technos, continued making followups to such titles when the Super Famicom arrived on the scene. However, when it came time for their final Kunio outing on the 16-bit console, the devs decided on something different than their usual fare.

Brawlers? Too tame. Dodgeball? If you're a wuss. What you need is a game where high school students indulge themselves at a food cart, a yakai. Hence the name Kunio no Oden. Before you get too weirded out, this is basically a tile-matching game where the "tiles" are made of food. And what exactly is oden? It's essentially a hot pot where stuff like fishcakes, tofu, boiled eggs, and radishes simmer together in a broth. Within the frame of the tile-matching design, the "field" is the pot, with food falling from the top to the bottom, stuffing said pot. A match ends if you fail to stop the pot from filling to the top, and the only way to prevent that is to make food disappear from the field. 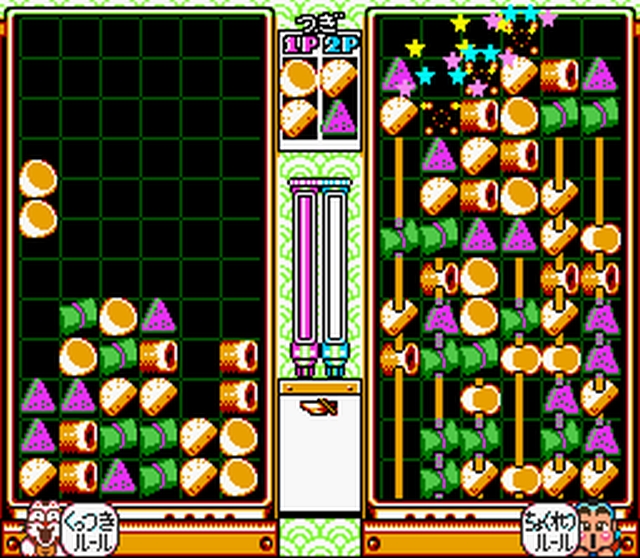 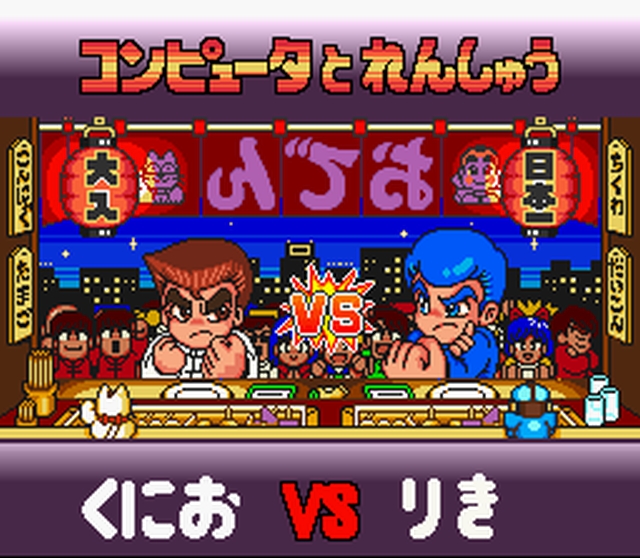 This is accomplished with the use of falling food, each one descending in a string of two vertical edibles. Before they touch a surface you can move them in the appropriate spot, with the objective being to line up an edible with similar pieces; eggs with other eggs, konnyaku with konnyaku, and so on. They disappear if you succeed at linking four or more of the same type, and this is made simpler by the fact that it doesn't matter what placement they're in. As long as everything's touching one another, it counts. Also lending help is how much flexibility you have when positioning food. Each vertical "three-block" piece that falls can be turned horizontally and, better yet, if you horizontally drop a set on an uneven surface, the edible that's hanging over the edge separates and falls on another surface. This level of wiggle room is certainly advantageous for better chain reactions and making more room on the field.

Also, this is just a food-themed Puyo Puyo.

With that said, it doesn't come as a surprise that there's also a competitive mode where you must outlast the other player or computer while also sabotaging their field. You simply do this by playing really well, stacking up enough food in an attempt to perform a chain reaction. In turn, your successful chain casts a handicap on your opponent's field, resulting in wooden sticks, or kushi, vertically skewering anything in the lanes they land in. You can still make skewered food vanish, but stick pieces that are just taking up space will remain on the field for the duration of the duel. Of course an opponent can do the same in return, so not only is your skill needed but the speed to outpace the competition. 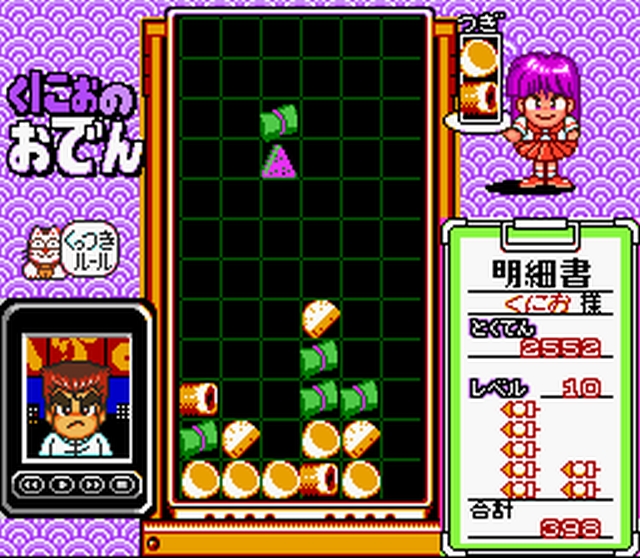 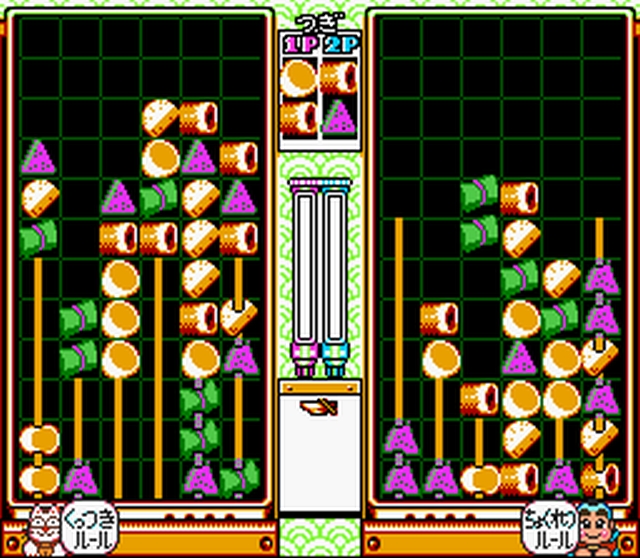 If fighting against someone isn't your thing, Oden provides a single player mode. If you've played any tile-matching title involving blocks falling, then you know the deal here: it's an endurance run that ends until the food stack reaches the top of the field. Usually, you would begin with a slow, controllable descent of falling blocks, allowing time for you to build up stacks for some good chains. Oden starts off differently on the default difficulty setting. Weirdly, food pieces drop much faster from the beginning, practically forcing you to make decisions on the fly. Fortunately, you can slow down the speed by playing on the easy difficulty; if this game didn't have that option, this would have been overwhelming if you're new to tile-matching.

Whether you're new or seasoned, is Kunio no Oden worth your time? It's really a Puyo Puyo variant with the Kunio-kun named slapped on it. The devs modified the formula a little bit, such as the way opponents get punished in versus play with sticks and the odd speed increase in single player. There's also an option to change the way food disappears, from having four-or-more connect in any angle to a tic-tac-toe three-or-more alternative; Columns, except you can flip the falling "blocks" horizontally here. But these changes are minor and don't dramatically change the blueprint. It's functional, but even from the perspective of a Kunio fan it feels like a throwaway game, and you're better off checking out an actual Puyo Puyo title on the Super Famicom. Hilariously though, this comes off as a more bearable game of Columns if the original Sega release felt too restrictive for your tastes.

If you enjoyed this Kunio no Oden review, you're encouraged to discuss it with the author and with other members of the site's community. If you don't already have an HonestGamers account, you can sign up for one in a snap. Thank you for reading!

© 1998 - 2022 HonestGamers
None of the material contained within this site may be reproduced in any conceivable fashion without permission from the author(s) of said material. This site is not sponsored or endorsed by Nintendo, Sega, Sony, Microsoft, or any other such party. Kunio no Oden is a registered trademark of its copyright holder. This site makes no claim to Kunio no Oden, its characters, screenshots, artwork, music, or any intellectual property contained within. Opinions expressed on this site do not necessarily represent the opinion of site staff or sponsors. Staff and freelance reviews are typically written based on time spent with a retail review copy or review key for the game that is provided by its publisher.