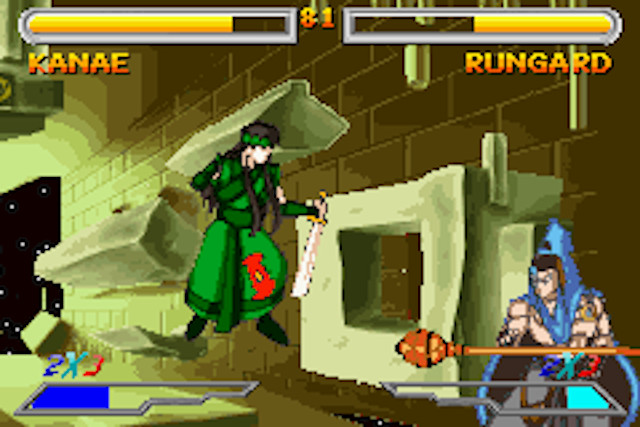 2D fighting games used to be all over the place. You couldn't hit a video or toy store in the 16-bit era without seeing at least a dozen "not-Street Fighter II" or "not-Mortal Kombat" titles on display. The thing is a lot of people who weren't around back then probably don't realize how common they were because roughly 80% of them offered forgettable, rehashed content and faded into obscurity as a result. SNK cranked out a ton of works like those, with droves of them popping up in arcades, ending up on NeoGeo, then getting ported (and downgraded) to SNES and Genesis regularly.

This trend eventually hit a downward slope going into the PlayStation era. For one small reason, early CD-based consoles came with long load times that often killed products of this nature. That, and 3D fighters were all the rage, as Virtua Fighter, Tekken, and Soul Edge swallowed up mountains of quarters before receiving acclaimed ports. Meanwhile, 2D battlers gathered dust if they weren't part of a well-established franchise.

That didn't stop some developers from trying their hands at the genre, hoping to break through with a tournament battler that would launch a new series. This sort of intrepid attitude led to brands like Guilty Gear and Melty Blood. However, as before, it also ended up grinding out cartridges that nearly everyone would forget existed. 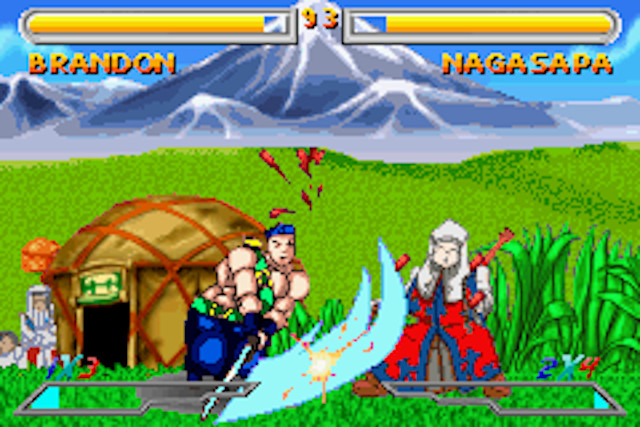 Imagine if Samurai Showdown popped up on Game Boy Advance with a toned down difficulty rating, and you've basically got this one. Here, you select one of several warriors sporting different weapons, choose their fighting "styles" (which influences some of their special attacks and big combos), then commence kicking the opposition's teeth in. In other words, it's just like every other 2D fighting game out there. You hack away at your opponent, dispense of unique strikes that suit different situations, build up a meter, then cut loose a massive series of blows that strip off a lot of health.

To the game's credit, it handles very well. Animations remains as smooth on GBA as you can hope for, and play control proves intuitive and simple. Even with only four action buttons at your disposal, the game never really feels overly simplistic in comparison to its brethren.

Dual's biggest sins come from its lack of identity. What exactly was the selling point here? The game isn't particularly fast-paced, so its action alone isn't a solid enough reason to dive into it. Plus, it offers no unique features or even creativity. The character you select fill all the usual versus game roles: the old mystic, the brash young man, the girl seeking vengeance, the honorable knight... Hell, there's even a clawed hunchback similar to Gen-An from the aforementioned samurai-themed game. I'll go a step further and point out that characters also split in half when defeated, just like that one SNK title... 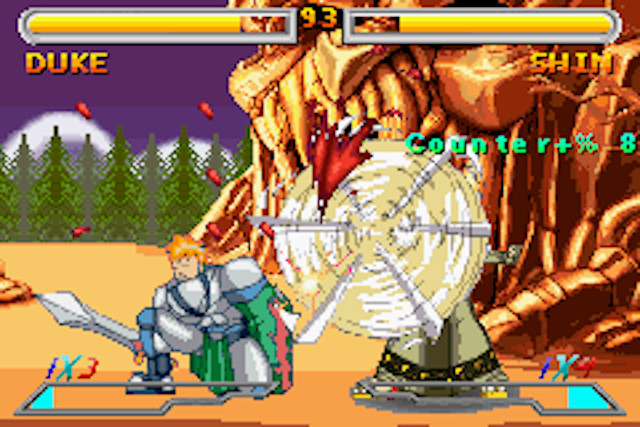 The only things Dual has going for it are that it's a fighting game on GBA with a two-player mode, and it showcases decent visuals for handheld title from the early 2000s. The former doesn't mean much nowadays, because it's unlikely all three people who still link their GBAs together even possess this cartridge. If anything, they're still trading Pokemon...

As I indicated, the game's graphics are quite lovely and bright. Backgrounds burst with life and slip you little hints of the kind of characters you play. Efe's stage especially shows off some wonderful design, with gorgeous Ottoman architecture and a burning, bright sun setting on the horizon. The magician Rungard's territory also provides some much-needed creativity, manifesting as a temple of sorts with what appears to be a dimensional rift and a giant, disembodied eye watching you slap your opponent around.

Again, this is all standard fare. If that's all your looking for with a 2D fighter, then Dual Blades should satisfy you for a short time. However, don't expect it to knock your socks off. As with so many of its cousins that crept out of the darkness during the '90s and early 2000s, this product lacks any special, standout features that can't be found in vastly superior titles. Only purists and genre completists need apply.

If you enjoyed this Dual Blades review, you're encouraged to discuss it with the author and with other members of the site's community. If you don't already have an HonestGamers account, you can sign up for one in a snap. Thank you for reading!

© 1998 - 2022 HonestGamers
None of the material contained within this site may be reproduced in any conceivable fashion without permission from the author(s) of said material. This site is not sponsored or endorsed by Nintendo, Sega, Sony, Microsoft, or any other such party. Dual Blades is a registered trademark of its copyright holder. This site makes no claim to Dual Blades, its characters, screenshots, artwork, music, or any intellectual property contained within. Opinions expressed on this site do not necessarily represent the opinion of site staff or sponsors. Staff and freelance reviews are typically written based on time spent with a retail review copy or review key for the game that is provided by its publisher.