Founded in 2015, Nyamakop is an indie video game development studio based in South Africa. Its first game, Semblance, is published by Good Shepherd Entertainment and is available now for Nintendo Switch. You can also download it on Steam, if you prefer, and play it on your Mac or PC.

Players control a blob of jelly that lives in a forest, where giant trees apparently safeguard the gelatinous hero and other such creatures. But now, a dark miasma has infiltrated the guardian trees, and the blob must work its way through numerous stages to gather glowing orbs that will return light and goodness to the suddenly darkened world. 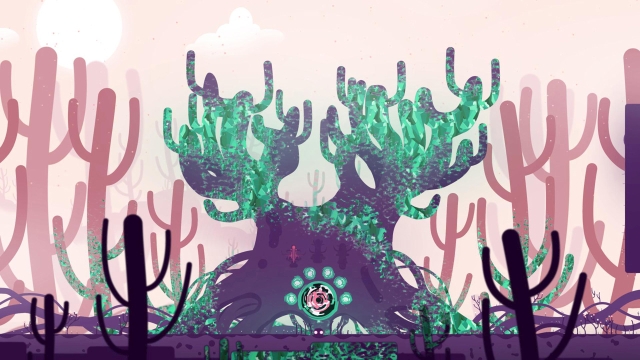 The most interesting thing about Semblance, besides its unconventional place of origin, is a central mechanic that allows the unnamed blob to impact and deform the very environment it is attempting to save. As the blob, you have a limited set of moves. You can hop, dash against objects to deform them, or draw in your energy to undo any deformation (sort of like the "undo" option in Microsoft Word). The many puzzles you must solve require you to manipulate the terrain to solve the increasingly complex puzzles you will encounter over the course of a campaign that will likely last around four hours or so on an initial run (or perhaps less, if you're a genre veteran).

Although the world of Semblance is for the most part devoid of enemies, there are plenty of hazards to take their place. Sharp spikes immediately wipe you out if you touch them. Laser beams accomplish the same task, whether they are stationary or moving about while attached to some device. And you will infrequently encounter roaming sentries that also prove fatal when touched. Otherwise, there aren't a lot of threats to worry about. This is mostly a game about using your mind, not your twitch reflexes. 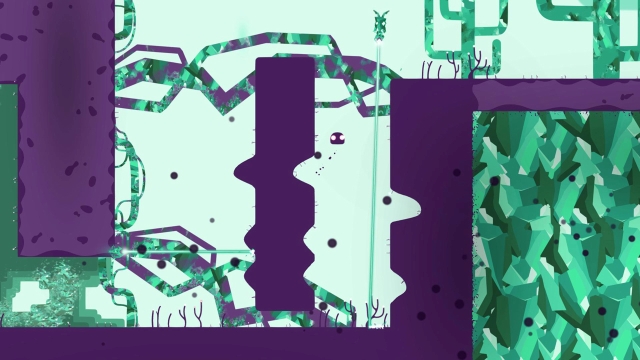 A typical stage includes a handful of puzzle rooms, which aren't presented as literal rooms but amount to the same thing. You can generally roll through one sequence after another, spotting an orb in a tough-to-reach location and either going for it or not. To properly clear a stage, though, you must eventually return to gather any orbs you ignored on your initial visit. And to clear a region, you must clear all of the stages. There are four regions in all, but the fourth is short enough that you might be excused for concluding it doesn't even really count.

So anyway, there are the puzzle rooms that eventually you have to master so you can advance the campaign. And they are fairly devious, some of them. Generally, there are two or three complications in the mix all at once, but none of those are difficult all by themselves. 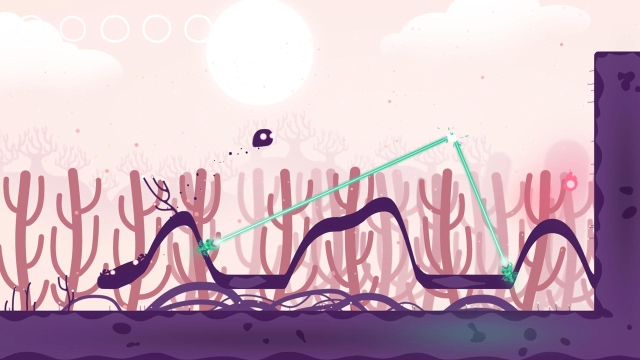 For example, you might see an orb floating high above the ground, well out of jumping range even if you jump and then perform a vertical dash at the peak of that hop. However, you can dash sideways and make an indentation in the wall, then jump again and make another indentation. You can repeat the process to assemble a ladder of sorts, which allows you to easily snag the prize.

For example number two, you might see a colored spotlight. So you start deforming land nearby, but you push it too far and it comes within the path of the spotlight. Just like that, it springs back into place. Before you can move the earth in the spotlight's path, you need to affect the area around the spotlight itself so it points in a different direction and you are freer to work. 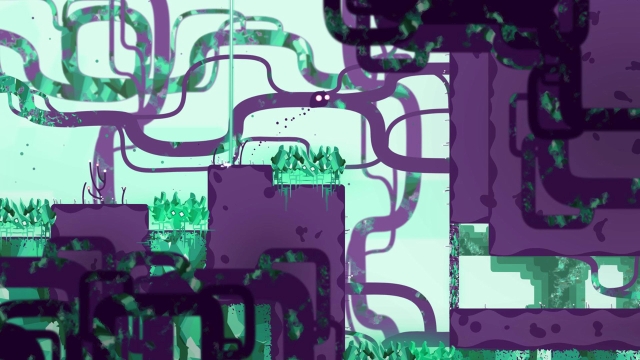 As you advance through the campaign, you'll encounter numerous situations like those described above. You'll also reach a series of stages where you must mash against colored stone to change the shape of your own blob, gaining longer or higher leaps in the bargain. The developers are good at introducing new elements organically. You initially see them presented in a very basic form, but before long you find yourself building on what you've learned to negotiate a proper series of challenges, all so you can claim that next prize.

Semblance is often very creative, which works to its credit. But sometimes, perhaps unavoidably, physics get in the way. You're required to be too precise in how you shape the land, or you won't be able to move ledges in such a way that you can safely leap between them. Or you are climbing up a wall and you keep getting stuck to the surface. Or you jump out to try and make another hop, and suddenly you plummet straight down for no good reason. Such dives aren't generally fatal. Even if they are, not much progress is lost. But those slip-ups are irritating, just the same. 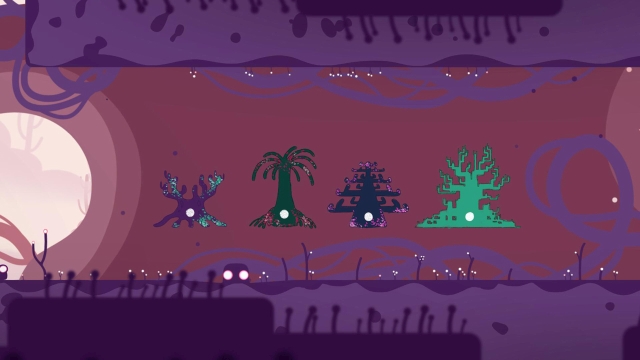 The other criticism one might most readily level against Semblance is that it's not quite interesting and varied enough. There are really only a few distinct environments, and they're mostly just window dressing. The hazards presented don't feel specific to them. The game has a corrupted forest theme, so of course you're looking at trees and such. But if the developers and artists had wished, they could have presented a cyberspace theme or a warehouse or some other such theme and none of the puzzles would have needed to change. For that reason, the lack of more diverse environments feels like an oversight even though it isn't one. The relaxing vibe is appreciated, but some additional diversity was needed.

Despite such minor issues, Semblance is a thoroughly competent action/puzzle game that feels like it might just as easily have come from a more experienced studio with a number of hits under its belt. The inventive campaign makes the most of its unusual premise, even if it could have benefited from a little more variety, and players should welcome design that routinely requires them to think outside the box. Maybe give the title a shot the next time you're interested in a slightly different challenge from the norm.
3.5/5

If you enjoyed this Semblance review, you're encouraged to discuss it with the author and with other members of the site's community. If you don't already have an HonestGamers account, you can sign up for one in a snap. Thank you for reading!

© 1998-2020 HonestGamers
None of the material contained within this site may be reproduced in any conceivable fashion without permission from the author(s) of said material. This site is not sponsored or endorsed by Nintendo, Sega, Sony, Microsoft, or any other such party. Semblance is a registered trademark of its copyright holder. This site makes no claim to Semblance, its characters, screenshots, artwork, music, or any intellectual property contained within. Opinions expressed on this site do not necessarily represent the opinion of site staff or sponsors. Staff and freelance reviews are typically written based on time spent with a retail review copy or review key for the game that is provided by its publisher.