Howard Philips Lovecraft, notwithstanding criticisms of him having possibly been a terrible human being, is enjoying a considerable level of celebrity these days -- certainly a great deal more than he could ever have imagined receiving while he was alive. Whether or not he was a xenophobic misogynist or a raging racist; whether or not we condemn him for these things; and how much we attribute this behaviour to time and place -- his contribution to the weird fiction genre cannot be denied or understated.

And so, it would make sense that the celebrated horror author should have an impressive catalog of entertainment media based on his work. It would make sense, but it's not the case: there is no seminal Lovecraft movie or video game, and its puzzling, and its a shame. The thinking used to go like this: his major works tended to depict an academic in over his head, beckoning ancient aliens through some evil threshold at the behest of brainwashed cultists. The aliens would trample us as we would an insect underfoot, were it not for archaic safeguards erected by questionable powers to protect against the inevitable awakening of these elder gods, these Great Old Ones.

The Old Ones are consistently described as indescribable, and Lovecraft's genius was how he conjured mind-blasting terrors fashioned by our own minds eye; his genius was to only provide the lightest of dark gestures while our lot was the filling in of broken lines, the connecting of dots. How then, to show what cant be shown? Surely now, with our current advancements in special-effects, exposition of the unspeakable should no longer be a barrier? 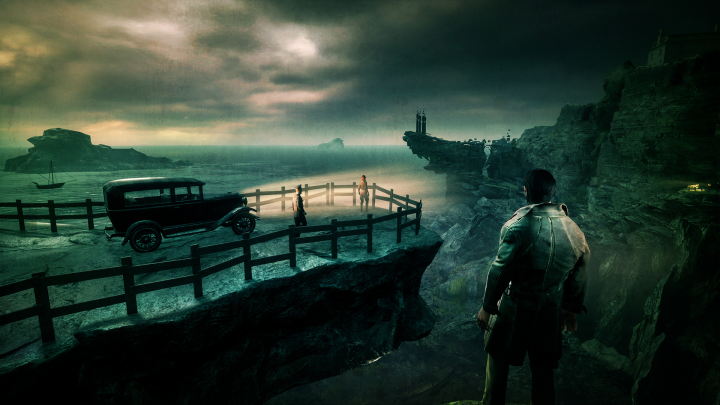 Call of Cthulhu, you'll be disappointed to know, addresses none of this. It is a game made with love for the subject matter, featuring striking lighting effects, fantastic renderings of both period (the story plays out in 1924) and alien architecture, and it handles our protagonist's growing mental instability with aplomb. Encounters with creatures threaten to break him; even short trips through crawlspaces or stressful stays in wardrobes as hiding places will bring on screen-warping anxiety symptoms. As a fan of the material, I appreciate all of this deeply, but with the game's attempt to tell its tale across several genres, it fails us in all respects.

Edward Pierce is a musclebound war veteran, but the game wants us to believe he's no man of action. Okay. He's a private investigator who relies on the bottle to keep the demons of PTSD at bay. Just as his agency threatens to terminate him, a client walks through the door. The man says his daughter's death in a fire doesn't add up; he wants Pierce to find out what really happened to Sarah Hawkins. What choice do we have?

It turns out that Sarah was a painter of unearthly and unsettling subject matter. We're off to Darkwater, a crumbling seaside town fraught with unsavory characters. From the port to the Hawkins' home; from an asylum to a police station -- Call of Cthulhu takes us to the expected locales.

All the while you will be asking questions and searching for clues in the form of books, notes, keys and artifacts. This is your detective work. The questions you ask, and answers you provide will affect how the plot unfolds and what ending you get. This is the adventure development. Progress in the story will earn you character points towards upgrading Pierce's attributes at Investigation, Strength, Eloquence, and so on. This is your RPG element. An annoying stretch has you exploring a psychiatric hospital while simultaneously steering clear of orderlies. This is your stealth action. 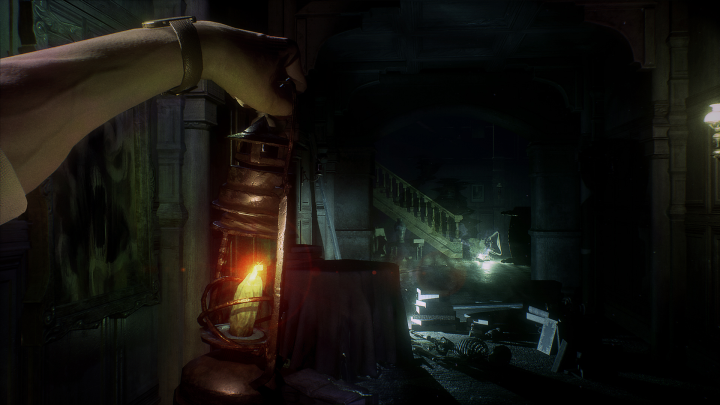 None of these moving parts is a seamless part of the whole. Looking around with even a modicum of care will reveal everything you need to know -- there is nothing that needs to be 'figured out.' The game informs you at various points in its back half that a response you've given will "affect your destiny," in the same fashion that Clementine will remember that. And while we might cringe at the shameless copying, what's much worse is that we're being lied to. Our destiny will not be affected. To the best of my knowledge, the only reckoning will come just before the final scene, where you're given a choice, and someone will take the briefest of inventories of your progression to that point, distilling down the total sum of your decisions in a line or two, but still offering the game's crucial choice in any case.

The RPG business doesn't fare any better -- it won't take you long to realize that it doesn't matter much at all how you allot your points. I came to a locked door early on and was disheartened to learn that I couldn't pick it for lack of Investigation points. I left the room and after a few seconds came upon a key that would unlock the very same door. Similarly, later in the proceedings, I was barred from entering a passage due to a lack of Strength in forcing a mechanism. A simple alternate solution became clear in mere moments. Doing things the way that is perhaps intended would only seem to assist you in achievement-chasing.

Finally, the stealth sequences are very rudimentary as to be laughable at times. Enemy AI is crude and limited; this is one of those games wherein you can cross a hallway in plain sight, very close to an enemy, while in complete safety, simply because the enemy's gaze is directed forward and not directly at you. There is no peripheral vision, there is no accounting for making noise. You will get caught, however, and that's down to you running around trying to uncover clues with no respect for the patrols, only to run into the path of one of them. Here the AI works in reverse: you'll lose the guard and go hide in a dark corner where he shouldn't be able to find you, yet he'll calmly walk around this corner and that, in no rush, right to your exact location in the dark as though you were wearing a homing device. 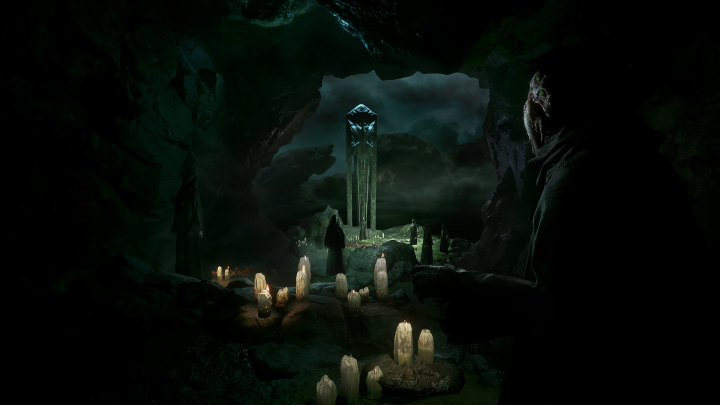 So Call of Cthulhu doesn't succeed at any genre it tries. You might chalk that up to the development team being too ambitious -- a more singular vision would almost certainly have improved the experience, turned it from weak to good. And yet, we still wouldn't have a winner on our hands. There are some surprisingly 'indie level issues' with writing (spelling and grammar!) which you would not expect from a polished, triple A title. At one point, our hero remarks that he must catch up with another character 'before they do something bad.' In the context of a riveting load screen synopsis, a call to action to prevent something bad constitutes awfully limp writing.

You might think it unfair for me to hoist triple A expectations on the game, but that wasn't my doing: the game's pricing did that all on its own. I am not sure if I would have played Call of Cthulhu to the end as I did were I not a huge Lovecraft fan, and were I not tasked with writing this review. But I am sure that I'd have been pissed had I paid for the game. Even our favourite thing about Lovecraft -- his monsters -- is mishandled. The Dimensional Shambler? Leviathan? The former was born of an obscure team-up with another writer, and the latter wasn't even Lovecraft's creation. I understand to some degree not wanting to retread ground covered already by Call of Cthulhu: Dark Corners of the Earth, but it seems shortsighted not to have included the Deep Ones, or Dagon.

Call of Cthulhu is an uneven effort across all genres it attempts. Despite offering visuals which are clearly not up to standard, it presents with obnoxiously long load times between levels; chapter pacing is like a child's afterschool story -- we were doing this, and then we did this, and now we're doing this -- amounting to progression which often feels disjointed. Dark Corners of the Earth remains the best so-called Cthulhu Mythos game to date, by a considerable margin. That game was actually unnerving if not outright scary. Its early stealth bits pitted the entire town against you and the action bits later on could see you killed. Perhaps this newer title's walking simulator approach is half the trouble: it feels all too apparent that Pierce is on rails towards inevitability. I'd recommend Call of Cthulhu to only the most die-hard of Mythos fans, and only after a significant price reduction.

If you enjoyed this Call of Cthulhu review, you're encouraged to discuss it with the author and with other members of the site's community. If you don't already have an HonestGamers account, you can sign up for one in a snap. Thank you for reading!

© 1998 - 2022 HonestGamers
None of the material contained within this site may be reproduced in any conceivable fashion without permission from the author(s) of said material. This site is not sponsored or endorsed by Nintendo, Sega, Sony, Microsoft, or any other such party. Call of Cthulhu is a registered trademark of its copyright holder. This site makes no claim to Call of Cthulhu, its characters, screenshots, artwork, music, or any intellectual property contained within. Opinions expressed on this site do not necessarily represent the opinion of site staff or sponsors. Staff and freelance reviews are typically written based on time spent with a retail review copy or review key for the game that is provided by its publisher.