Beat em ups (when set in the two-dimensional plane) tend to suffer from repetition. Unless there are set pieces, boss battles or some other special gimmick to keep your attention, they quickly grow stale. Mother Russia Bleeds keeps players invested with a cocktail of violence, grim visuals and its satisfying soundtrack. Each element delivers beautifully on its respective front. Poor writing, irritating bugs and some frustrating points of the games difficulty do rear their ugly heads along the way, but those flaws are easily overlooked if you have a couch full of friends at your side.

Its clear from the get go that Mother Russia Bleeds has earned its M rating. The game uses graphic violence and incredibly mature imagery to quickly communicate that the world the protagonists inhabit is not a pleasant one. Brutality is used cleverly to communicate the health of your enemies; the more horribly beat up they look, the closer they are to death. This is as clever as the violent presentation ever gets, however; the rest of the gore and the bloody messes are there just to look gruesome. 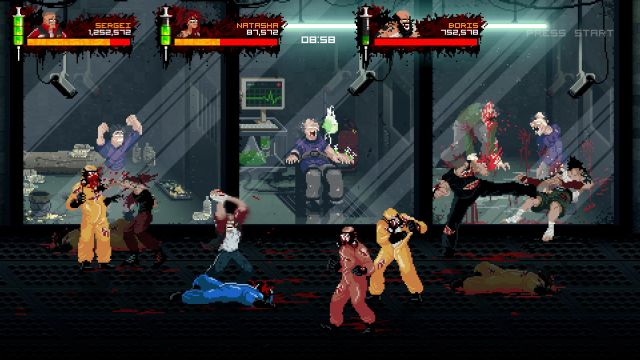 At the start of the game, the playable characters are locked up as lab rats and are treated as such. Upon escape, they at first suffer from hallucinations and are blinded by fury, but they oddly begin to crack jokes and jeer at opponents like nothing is at all wrong. This quirk produces a disconnect between the intense violence and the script, especially when the story's focus shifts to the grand revolution against the government after an initial focus on the question of what "Nekro" is, and why the protagonists were used as guinea pigs while their captors tested the stuff. If the cast were filled with rage and refused to listen to reason for the game's entirety, I would have felt more connected to everything. Luckily, the inconsistency isn't bad enough to entirely get in the way of enjoying the game.

Your only means of recovering health in the game is the aforementioned substance known as Nekro, which also powers up the players so that they can inflict incredible damage. The only way to obtain more Nekro is to defeat enemies and hope they convulse instead of dying outright, so that you can extract the fluid from their bodies. You can store three charges in the syringe you carry around with you. The risk-reward gambit this system produces is obvious: do you save Nekro for instances when you find yourself in dire need of additional health, or do you juice up and go haywire on surrounding enemies? Should you ignore that convulsing enemy and defend yourself as normal, or throw caution to the wind and try to draw as much Nekro as possible while other baddies circle you? In earlier stages, these choices are simple enough, but as you come across more difficult and complex enemies, opportunities to safely gather more Nekro are few and far between. 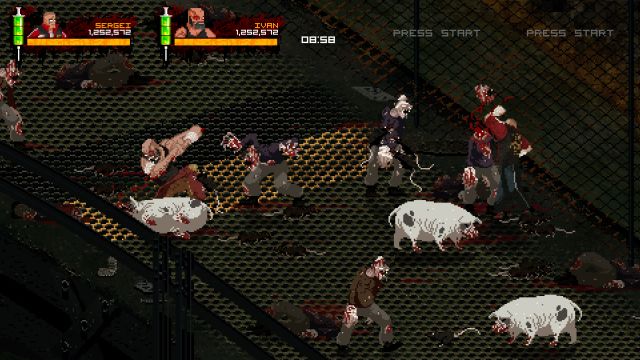 Enemy complexity typically functions more as an annoyance than as a source of head-on danger, specifically when enemies are armed with guns. Such encounters briefly reduce the difficulty, since the gun-toting thugs can most certainly shoot their own allies. Then when you obtain that same weapon, you find that you have way more ammo at your disposal than you actually need, which allows you to effortlessly wipe out full waves of enemies (especially if youre careful with spacing and aiming). Boss battles, meanwhile, don't require pattern memorization or precise timing as much as they do inelegant button mashing.

The game controls very well as a general rule, mind you, and theres variety in the move set that I was not expecting. There are the usual light and heavy strikes that you can alternate between, plus you can grab and throw a foe at his comrades. On top of those predictable options, you can also knock or toss enemies upward, only to grab them and spike them back into the ground. You can also pummel fallen enemies into submission with cringe-worthy brutality. My favorite approach is to sprint and perform a sliding tackle to knock enemies in the opposite direction, so that they are suddenly thrown off-screen and won't approach until I am ready to deal with them. Every hit along the way is rough enough to make a person cringe and each charged strike feels like a haymaker from hell. Beating the ever-loving sense out of baddies feels disturbingly good. There's even an arena mode that lets you do that while competing for high scores and unlocking new Nekro types that award you new power-up effects. 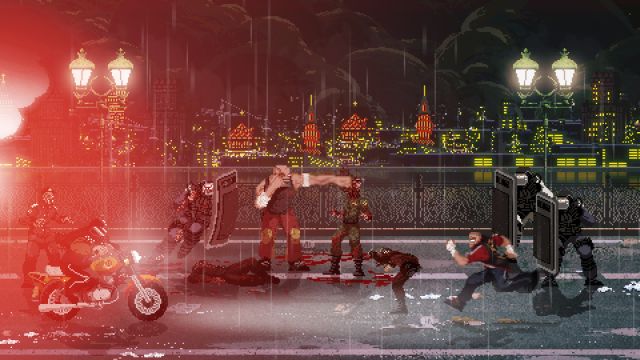 Area backgrounds are detailed, even in pixel form. The distinct environments you explore range from prison yards full of sneering criminals, to luxurious penthouses with social elites apathetically watching the carnage. Then there are the Nekro-induced hallucinations, which are full of horrific, bloody detail. Also, there is the fetish club level, which is just... horrifying in ways I cant begin to explain in a manner that's safe for work. The characters look great, and enemies are easily distinguished from one another except when they start forming large mobs. If you drop an item amid a pile of corpses, though, good luck finding it again!

The soundtrack was my favorite takeaway, overall. It feels like a dirty, grungy cousin to Hotline Miamis neon-laced sound. Most of the music has an industrial electronic feel to it that syncs wonderfully with the carnage and violence that occur on-screen.

Mother Russia Bleeds co-op is unfortunately limited to local play only, though dim-witted AI teammates are also available. Theyre not so bright, but they at least are savage and unrelenting. I played through the story campaign with computer teammates at my side, and I came to the conclusion that my earlier complaints wouldve been mostly moot if I had other human players with me, so that we could joke together and play more cooperatively. The limited available options make it difficult for me to recommend the game if youll be playing it alone, but with at least one other person to join you, the experience certainly warrants a thumbs-up.
3/5

If you enjoyed this Mother Russia Bleeds review, you're encouraged to discuss it with the author and with other members of the site's community. If you don't already have an HonestGamers account, you can sign up for one in a snap. Thank you for reading!

© 1998-2020 HonestGamers
None of the material contained within this site may be reproduced in any conceivable fashion without permission from the author(s) of said material. This site is not sponsored or endorsed by Nintendo, Sega, Sony, Microsoft, or any other such party. Mother Russia Bleeds is a registered trademark of its copyright holder. This site makes no claim to Mother Russia Bleeds, its characters, screenshots, artwork, music, or any intellectual property contained within. Opinions expressed on this site do not necessarily represent the opinion of site staff or sponsors. Staff and freelance reviews are typically written based on time spent with a retail review copy or review key for the game that is provided by its publisher.