Streets, alleyways, construction sites, and schools have erupted into chaos and violence, and the reason for this sudden outburst of thuggery is because of one instigator, a man who goes by the name Slick. Staying true to its title, River City Ransom literally begins with a ransom note screen, where it states that Slick has taken an entire high school hostage, along with one of the protagonists' girlfriends, and that his numerous gangs will continue to run rampant through the city unless demands are met. Who did Slick sent this letter to? What demands? Why aren't the police getting involved? Who cares. This is a beat 'em up, so the only thing you need to know is, yes, you get to pick up heavy objects and beat people over the head with them.

Granted, the game's plot synopsis is pretty heavy for an NES title, and you're basically controlling a high school student that engages in blunt force combat, with the help of steel pipes, brass knuckles, and tires, against countless other high school students. However, what little serious tone RCR had is intentionally tossed out the window when you trade fists and kicks for the first time. Characters are depicted in a super deformed style, and whenever someone gets injured, they make the goofiest facial expressions. The light, oddball mood doesn't end there, as thugs usually shout "BARF!" and "BIFF!" when whacked, some run away in fear if you mess with them too long, and you can even pick up an unconscious punk and beat another enemy with them, as if wielding a pipe.

The amusing visual format mixes especially well with the combat, which is very fast-paced and often hectic; every character has the ability to run, meaning opponents are constantly dashing right at you with deadly weapons they'll either swing or toss, forcing an immediate reaction on your part. And with different, random gangs meeting you whenever entering a new screen, you'll never know how ruthless the beatings get until you're in the midst of the action, as each gang act as various stages of difficulty. Considering a limit of two enemies are allowed on screen at any given time, due to potential mass slowdown and flickering, the level of liveliness on display is admirable. There's even a block system, though very primitive, where you can block an enemy attack, and vice versa, if you hit the attack button as they're striking. 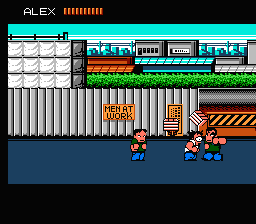 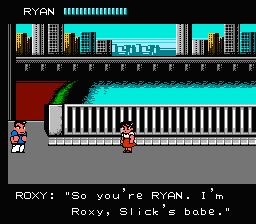 RCR goes further with its unique contributions to the genre by injecting its frantic energy and humor inside a "non-linear" setting. In actuality, the "map" layout still makes you go through a single path, with only one dead end location acting as a brief detour... hence all the quotation marks. However, the game is unusual in the sense that you can backtrack in this beat 'em up, doing so for the sake of stat-building and defeating gang leaders, the latter which allows access to the final, locked area. Not surprisingly, the leaders react and hit faster than regular foes, which is why growing stronger is a must for success. To do this, you collect coins dropped from defeated enemies, in turn gathering enough wealth to buy items located in safe shopping districts, where you can witness your character order and comically devour coffee, cup included.

Though, there's an element of risk when saving money: lose all your health in combat, and punishment is not a game over, but the deduction of half your wealth. So there's a balancing act when collecting quickly-vanishing coins while trying not to get hurt in the process by fast and sometimes unpredictable enemy movement. The whole idea of improving your stats and strength through combat is a nice feature to have in a beat 'em up... but its execution in RCR leaves a lot to be desired.

If you're genuinely trying to play the game to completion, you pretty much have to grind, and the thing about grinding is... well, it's grinding; pummel around five enemies right beside a shopping area, collect their coins, move back into the shopping area, maybe heal in one of the shops, move back into the combat area, and repeat this procedure approximately ten or so times until you have enough cash to purchase a strong technique. Or accidentally die and lose money, prolonging the exercise. To the developers' credit, you're allowed to maintain items even after you lose, so that's cool. 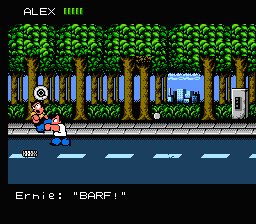 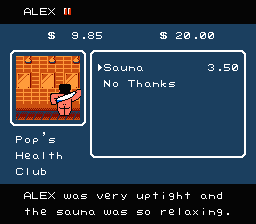 Grinding, by nature, is a repetitive task, but in RPGs you get to at least fight a wide range of enemies, with numerous attacks, to help soften the routine. Grinding in RCR shines a light on this need for variation, as you fight the same type of enemy, with the same punch, kick, and throw attacks, throughout the entire game. Enemies have different-colored clothing and slightly-structured faces, but that can't hide the fact that this game consists of only one fighter, even the gang leaders! It's interesting to think that, for all its attempts to stand out from other beat 'em ups, RCR trips when it comes to one of the most basic attributes of the genre.

Without RCR's combination of comedic traits and frenzied fighting, the flaws would have made the game very mundane and disastrous, rather than being the average, humble attempt at doing something unique that it is. It helps that the game is not really lengthy, taking an hour to complete once you find your groove, and less in subsequent sessions once you realize only two specific techniques are needed to plow through the hordes. River City Ransom is at its best as a distraction in a two-player co-op experience, when you're trying not to beat the game and just playing it for novelty's sake. At least this way, you can have fun torturing your partner by disrupting an important fight with a trashcan throw to the back of their head.
3/5

If you enjoyed this River City Ransom review, you're encouraged to discuss it with the author and with other members of the site's community. If you don't already have an HonestGamers account, you can sign up for one in a snap. Thank you for reading!

© 1998-2021 HonestGamers
None of the material contained within this site may be reproduced in any conceivable fashion without permission from the author(s) of said material. This site is not sponsored or endorsed by Nintendo, Sega, Sony, Microsoft, or any other such party. River City Ransom is a registered trademark of its copyright holder. This site makes no claim to River City Ransom, its characters, screenshots, artwork, music, or any intellectual property contained within. Opinions expressed on this site do not necessarily represent the opinion of site staff or sponsors. Staff and freelance reviews are typically written based on time spent with a retail review copy or review key for the game that is provided by its publisher.