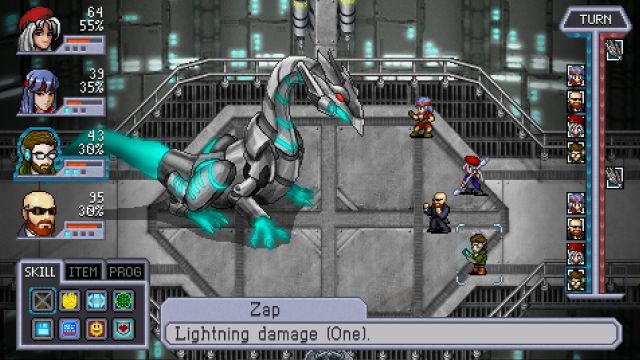 One section of Cosmic Star Heroine's campaign places you in an underwater base. Unfortunately, your adversaries locate you and launch an attack. The base is pretty much screwed, but one of your party members has a plan. While the invasion commences, a portion of your party ventures into an installment separate from the headquarters to begin escape protocol. Of course, you can't except to waltz in and throw a few switches, then declare victory. For whatever reason, this piece of the facility houses phantasmal sea life, so you battle your way through halls full of undead fish. Exciting music blares with each conflict, featuring a cool fusion of guitar and synth work. Eventually, this quest culminates in a war with a sea serpent's ghost, complete with a beastly boss BGM that got stuck in my head for weeks.

Meanwhile, protagonist Alyssa teams up with a few other cohorts to fend off the invading forces. You knock out tons of armed goons, before taking on a fairly tough boss. From there, you board an opposing spacecraft, kick the stuffing out of an endangered animal and attempt to commandeer the ship. A final animated cutscene plays out, with all the cheesy Hollywood glory you could want. All of these events transpire some time after you pilot a mech to defeat a kaiju, and thwart your own public assassination.

As you play, you might believe that the whole campaign will feature desperate escapes like this, but from here the experience peters out. Instead, you wander around an Old West-like town trying to gather event items to enter a boring gala, only to find yourself in a cliche jail segment. Later on, you need to prove your innocence after authorities accuse you of murder. You do so by moseying from one part of a town to another, examining various places and watching dull cutscenes. Several segments like these pop up between dungeons, and they add little to the campaign or storyline. More than anything, they feel like interruptions. 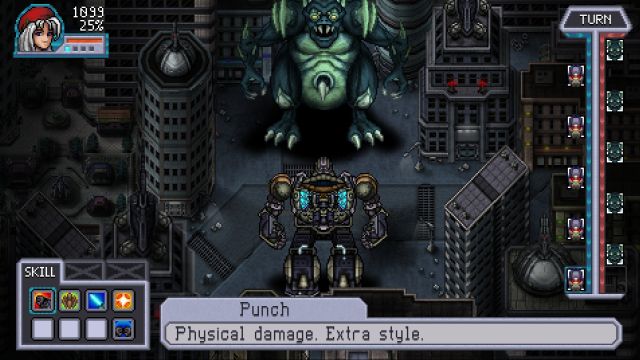 I'm not asking for a riveting story, either. I understand that this adventure borrows elements from the classic RPG Chrono Trigger, and probably drew inspiration from its fairly simple storytelling. However, Chrono Trigger made use of each character by giving them little subplots, while not bothering to explain plot holes the tale created. It embraced the contradictions for the good of entertainment, thoroughly having fun with a complex concept like time travel without worrying overmuch about consequences. Heroine attempts to keep things more or less basic as well, but forgets that it has a crew of characters to utilize and ideas to explore, even if only on a pedestrian level.

In fact, it offers you eleven recruitable party members. Many of them, such as Alyssa's cousin Finn or the dancing robot Clarke, only play a significant role during one part of the campaign. Finn shows up during the aforementioned attempt on your life, basically tells you he's a cop, then joins your cause. He aids you in combat for a short while, then fades into the background. Clarke dances you out of jail, then boogies into a dark corner somewhere, only occasionally throwing out a useless line during conference segments. You can move them in and out of your party almost anytime, but that's about the extent of their existences.

So you might hope Finn and Clarke would at least prove to be useful in combat. Nothing doing...

Heroine's battle system eschews your standard fight/magic/item commands and instead loads you up with exchangeable abilities, which consist of various physical attacks, spells, buffs, debuffs and tactical maneuvers. Thanks to this, you can customize party members more or less the way you want them. Some allies can serve purely as support, while others might be your chief means of offense. However, you can only use most abilities once before they're exhausted, requiring you to utilize a recharge command that restores all of your abilities, save for the rare few with "once per battle" stipulations. 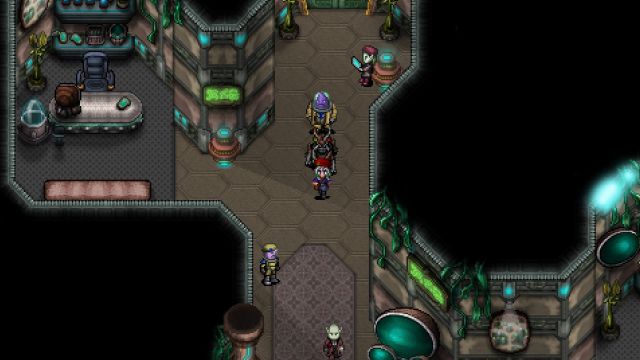 Sadly, this feature also renders some of your recruits less effective than others. Finn and Clarke , for instance, may receive their share of special strikes, but they also gain a ton of unhelpful skills that don't allow you to finish off the opposition efficiently. A few other folks come to mind, as they possess either middling offensive capabilities or too many buffs or debuffs to be worth a damn.

You want to end battles in short order, too, because damage ratings increase on both sides as a conflict endures. With each attack you land, you gain "style" points that boost your stats. This mechanic is a trademark of the developer Zeboyd, which allows you to build up momentum and deal serious harm. You can even deplete your style in exchange for an extra punishing blow. On top of that, your team also earns "hyper" points each turn, throwing them into "hyper mode" whenever they've filled their meters. That allows for even more devastating strikes and gives combat much needed strategic value. You don't simply mash buttons to get through simple commands, but instead must consider each move wisely, planning your operations around enemy weaknesses, the techniques you have available and the emergence of hyper mode.

Battles comprise the best portions of the campaign, despite the abundance of useless party members. Never mind Finn and Clarke, because you have other partners who prove invaluable in combat. Chahn, for instance, possesses an array of gunplay skills that deal greatly elevated damage during certain situations, plus she can restore and even revive people with her bullets. The ant-like alien Psybe plays music on his wings that either heal or damage targets each turn, and the hired gun Z'xorv knows a dozen or so ways to eviscerate his opponents. 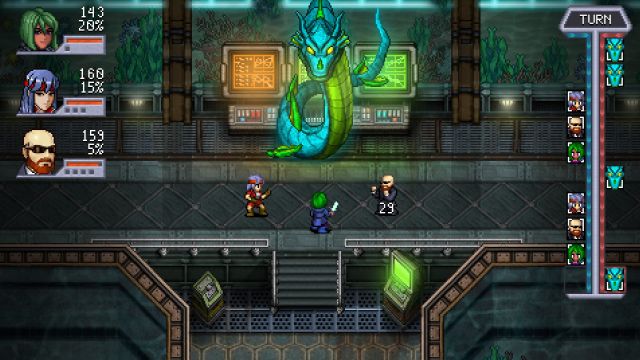 You'll need all of their talents as well, because you won't be facing off against soldiers and mercenaries forever. High tech machines, monstrous insects, escaped test subjects and hungry extraterrestrials stymie your progress, presenting stiff enough challenges that you'll need more than basic strikes to fell them. Things only grow worse as you run afoul of larger, deadlier foes, including robotic dragons, a mosquito the size of a small airplane and a cybernetic werewolf. And each of these fights keeps you on your toes. You're constantly wondering how you can keep your damage output at a respectable level, while maintaining decent hit points. Often, a boss will flatten you with a nuke, and you'll spend a whole turn recovering. However, now you've spent your curative abilities, and you need to consider if you should either take the time to recharge them or go for broke and hopefully blast the villain to kingdom come.

I had plenty of fun with Cosmic Star Heroine, even if a lot of its content didn't stand out. It hits the right notes in regards to combat and a few tense sections of the story. However, it doesn't fully utilize its cast, leading to drab story sequences that appear frequently. Look, I'm not asking for a deep narrative full of symbolism and social commentary. Just give me an entertaining, memorable crew with a few basic qualities, so that the talkie scenes won't be so tedious.
3.5/5

© 1998-2021 HonestGamers
None of the material contained within this site may be reproduced in any conceivable fashion without permission from the author(s) of said material. This site is not sponsored or endorsed by Nintendo, Sega, Sony, Microsoft, or any other such party. Cosmic Star Heroine is a registered trademark of its copyright holder. This site makes no claim to Cosmic Star Heroine, its characters, screenshots, artwork, music, or any intellectual property contained within. Opinions expressed on this site do not necessarily represent the opinion of site staff or sponsors. Staff and freelance reviews are typically written based on time spent with a retail review copy or review key for the game that is provided by its publisher.