There's hardly a gamer in the stratosphere that hasn't heard of the 'jump'n'shoot' hero, X and his ponytailed girl-ahem, ally, Zero, and though there are mobile editions of the venerable Megaman X, there hasn't been convenient way of gathering up the entire franchise. Who has the time, energy and money to invest in that irregular eBay treasure hunt? Sure, previous collections on the PlayStation 2 and GameCube served up a healthy smattering of robot smashing, but Capcom has been slacking. Until now.

I'd like to talk about each collection individually before I address their digital wrappers, so we'll start with X Collection 1. Of course I was positronically thrilled to find out the Megaman X games were coming to Nintendo Switch, and as soon as I could manage it, I bought both of them. I'm not going to bore you by re-reviewing the parcels inside the package, but purists will be reassured to learn that even the less than pristine framerates of the SNES editions of Megaman X 2 and 3 have been meticulously preserved. 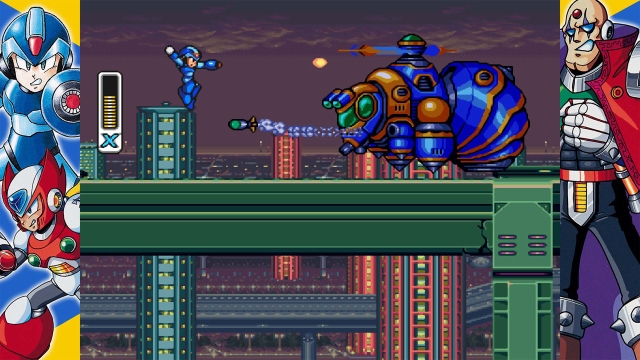 That point bears emphasis because homebrew emulation has given us a superior experience by alleviating - and in some cases improving - the performance of these game compared to the original hardware. The X Collection, however, preserves it because of one magical word: Nostalgia. Any deviation would surely draw spite and ire from even the most casual of players. Muscle memory does not lie. Of course they could have bumped up the performance of the emulated processors, but thats a compromise too far.

So, technically, all is well... except for the consequences that result from the type of emulation Capcom chose to implement on the Switch. According to frame count comparisons - YouTube is your best friend here - there is notable input lag, as much as 12ms or more. That may not mean much to you, but thats as many as two extra frames of lag. Speedrunners are going to shun this collection as a matter of principle, but I beat the first three games without a hitch.

The price on the tin is worth having the entire collection on a single, very portable console. That said, I do have a nitpick, and it might not be a small one: There were two versions of Megaman X 3: One for SNES, naturally, and then the PlayStation One port. For those not in the know, it features animated introductions, an arguably improved midi soundtrack, and stutter-free gameplay. The PSX could easily maintain 60 fps under the rigours of MMX3. Of course X4 plays just fine as well, forgiving Zeros memorable vocal performance. 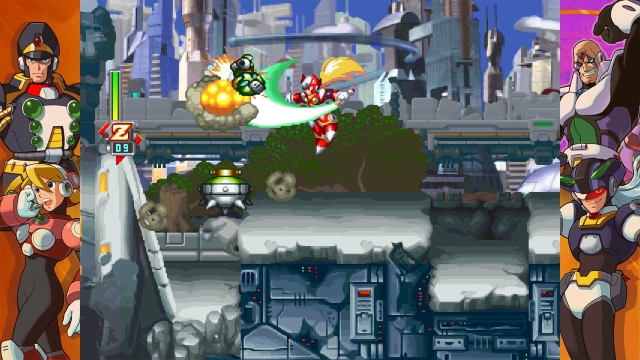 One might postulate that the choice was made for space constraints, but given that Collection 2 has the comparatively massive MMX5, X6, X7 and X8, that explanation is doubtful. Only the developers know why it was done that way, but I have my guesses. Licensing could well have restricted which versions were available to Nintendo, since it appears that the editions weve gotten are either from the Saturn or Nintendo GameCube. Sony and Nintendo havent been getting along in 2018, but, with all of that said, I dont suggest that the lesser of two X3s is a reason to steer away from X Collection 1. Many fans of the franchise are likely to skip X Collection 2, and could hardly be blamed for doing so.

In the case of X Collection 2, you get the lesser half of the Megaman X Greats, as mentioned. X6 plays well enough, but lacks the fast forward feature available in the original release, in addition to having very different introduction music than I was accustomed to. Hows X5? Why, its X5 just as solid as you remember. The boys can still duck, and thats just dandy. 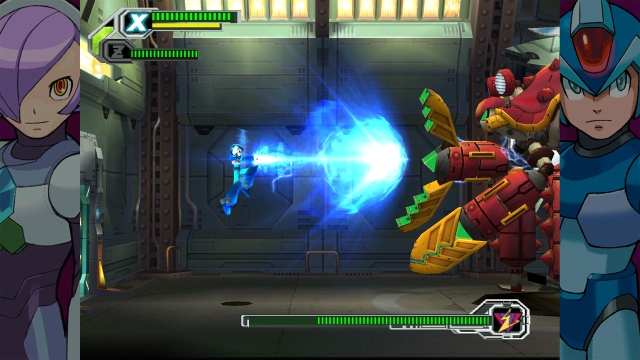 X7 is ... well, a pain in the posterior and faithful in its recreation. One thing it does is look a whole lot better than X8. For some reason the smoothing method applied to bitmapped images in X8 is unpleasant to behold. When the PS2 had a more than competent scaler, I doubt very much the original looked that bad. Remember, the PS2 had 4GB of potential storage compared to the GameCube's measly 1GB. If this was an emulation of the GameCube port, scaled down bitmaps could make more sense, but I dont have any facts to back that up. Just my observations and assumptions.

The good thing is that X8 every bit like you remember, and being one of those players who enjoyed the character designs more than the stiff, awkward action, I was very grateful for Rookie mode, which slaps on the training wheels by preventing the loss of extra lives when you fall into a pit, for instance. Having said that though, Ive had no impulse to beat the game. Maybe when Im sneezing my head off confined to bed. Maybe. X8 continues to be the best of the polygonal titles, even if it wasn't my personal favourite.

So, after all of that, Im sure you heard there is a Boss Rush mode. The rumours are true: In X Challenge, you select your difficulty, then catapult headlong into a fight against two bosses at once. Oh, lets not forget weapon selection: You get to choose three from a range of ... popular choices? Im not sure what the criteria are for what weapons are, but once youve locked them in, thats it. I couldn't seem to make new weapon selections between rounds, so I'm not sure it was an option. 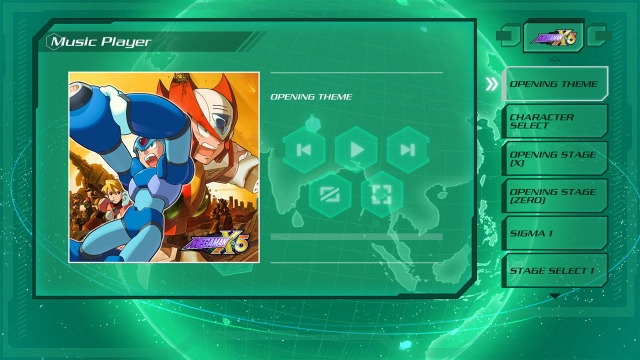 I suppose you just hack away at it until you beat them all. No, I havent spent much time playing this mode. Frankly the armour they give you looks like a poorly recoloured version of the Ultimate Armour. Remember how some weapons give X a paint job that can turn out to be pretty cool? Not here, buster. So far they exaggerate the amateur Paint.exe styling of... whatever that armour is. The concept art is as snazzy as anything else, but the sprite work is a real letdown when the mode is supposed to be a reward.

One peculiarity that stuck out to me was that the X Challenge occurs in two different "Volumes", but I'd be playing against bosses from both sets of game archives, so I'm not sure what the difference is supposed to be. On that note, why couldn't there have been the option to play as Zero here? I know there are players who agree that he can be more deadly than X with his formidable Z-Saber. Ah, afterthoughts.

Now, the X Collection wrapper(s) do have some nice features in the form of achievements, concept art, official art, promotional art... photographs of toys, you know. The usual. Oh yeah, and the "Day of Σ". They didnt take the time to provide an up-rezzed or smoother quality version of this OVA, but it is a perk to get to watch X and Zero get all emotional and weapon-y. It would have been nice to have a better version than the one we've all seen on YouTube. 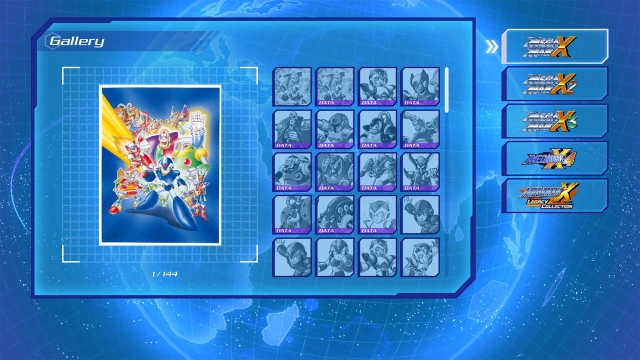 When youve run out of games to beat, the rewards are a nice touch and even fascinating if youre into the development process and/or lore of the franchise. The remixes we hoped for are there, but not as many as I would like to have seen, and not playable during the regular games. Of course, that would have been a much larger technical hurdle. Somehow, though I would have liked to see more perks for the homecoming of Megaman X to his originating platform. I'm not oblivious to the effort, time and money that Capcom put into the collection, with features like the option of choosing the International and Japanese versions of all the titles at your leisure.

While there have been several Megaman X franchise collections over last few years, this option for the Switch is not only brimming with extra content, in addition to X Challenge, it's also on the world's leading portable console. We didn't get the online mode we hoped for, but fans who were willing to pick this up likely already have 20XX, which sports that functionality. The price is right, and a lot of good gaming to go with the nostalgia kick you may enjoy. I can't think of a single reason not to make the leap, especially now that its back in Nintendo's land.

If you enjoyed this Mega Man X Legacy Collection 1 + 2 review, you're encouraged to discuss it with the author and with other members of the site's community. If you don't already have an HonestGamers account, you can sign up for one in a snap. Thank you for reading!

© 1998-2022 HonestGamers
None of the material contained within this site may be reproduced in any conceivable fashion without permission from the author(s) of said material. This site is not sponsored or endorsed by Nintendo, Sega, Sony, Microsoft, or any other such party. Mega Man X Legacy Collection 1 + 2 is a registered trademark of its copyright holder. This site makes no claim to Mega Man X Legacy Collection 1 + 2, its characters, screenshots, artwork, music, or any intellectual property contained within. Opinions expressed on this site do not necessarily represent the opinion of site staff or sponsors. Staff and freelance reviews are typically written based on time spent with a retail review copy or review key for the game that is provided by its publisher.