Maturation can be both a great and terrible thing. I always believed that I would remain faithful to the intellectual properties I held dear as a child. Turning my back on any of them was not only unthinkable, but practically heretical. I couldn't imagine a world where I didn't wake up on Sunday morning and watch Cartoon Express, play with my Masters of the Universe figures, or root for my favorite World Wrestling Federation competitors. I even pledged to play WWF Royal Rumble on SNES until my dying day. However, I was unaware then that the gaming industry and I would both mature, and that both of us would leave antiquated wrestling games like Royal Rumble behind to fade into obscurity. Once there, the influence such games once held would diminish. Royal Rumble in particular has lost so much of its luster that it's difficult to think of it as the definitive wrestling game of its time. Then again, consider its predecessors...

Unlike its NES brothers, Royal Rumble handled smoothly. Not only was the control response as tight as can be, but the control scheme was significantly easier to figure out. Such was the advantage of the SNES's controller setup over the NES. With more buttons, basic commands like grappling, running, and striking could be assigned to a single button rather than awkward combinations of buttons and D-pad inputs. Thanks to that, I spent more time engaging in matches than I did struggling with a steep learning curve brought on by a confusing control scheme.

I didn't utilize the punch or kick commands as much in Royal Rumble as I did in earlier titles. Instead I spent more time executing various slams, since they were easier to pull off than before. All that was required was a single button press to initiate a grapple, followed by wild button mashing in order to fill up a double-sided meter. Since I could mash like no one's business, the computer players never stood a chance. I bodyslammed, suplexed, atomic dropped, and headbutt the living crap out them until they were laying in a pool of their own sweat and misery. From there, I'd unleash further punishment in the form of vicious stops and splashes, sometimes even a top-rope elbow drops. 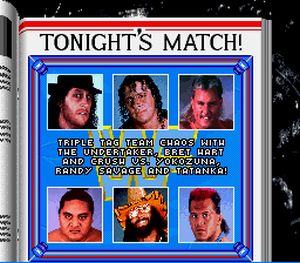 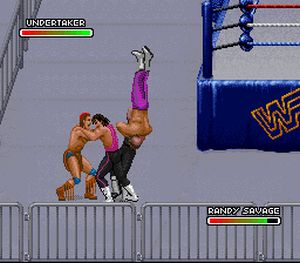 With little effort, I found myself winning countless championship tournaments and tag team matches, not to mention a fair amount of no DQ bouts. Especially, though, I dug the Royal Rumble match itself.

For those of you not familiar with the Rumble, the rules are simple. The match opens with two wrestlers, with new combatants entering the match at fixed intervals of time. The objective is to eliminate all competition by throwing them over the top rope to the outside of the ring. In the game itself, that's accomplished by executing a hiptoss near the ropes, which automatically throws an opponent out. There's no need to wear an opponent down before sending him packing. With a little finesse, it's possible to eliminate an opponent within seconds of his arrival. Of course, you have to bear in mind that you can be eliminated just as easily.

I played Royal Rumble tirelessly throughout 1993 and going into '94, mostly because it ruled the pro-wrestling video game roost. I knew that another game would eventually replace it, but I thought I would always see Royal Rumble as a timeless classic.

...but then that m-word reared its great and terrible head.

Late 1994, Acclaim released WWF Raw. The game played precisely like Royal Rumble, except Raw expanded on many of Rumble's concepts. The upgrade showed me how limited Rumble truly was, and in time I eventually forgot about the game. There was no reason to play it since Raw achieved the exact same end, but with improved features and visuals.

For starters, Royal Rumble's wrestlers all utilized the same move set. The only unique maneuver each competitor possessed was his finisher. This cripples the game's authenticity as a licensed product, especially since wrestlers aren't able to execute many of the non-finisher moves they frequently used in the program. Sadly missing from this foray are Bret Hart's second rope elbow drop, Undertaker's chokeslam, Razor Ramon's fallaway slam, and Yokozuna's leg drop. Though these moves aren't technically finishers, they're a big part of the aforementioned wrestlers' repertoires. Undertaker without a chokeslam may as well be Steve "Mongo" McMichael. 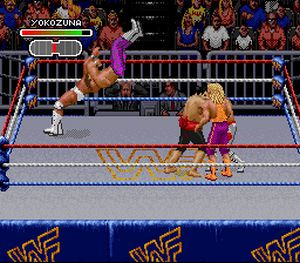 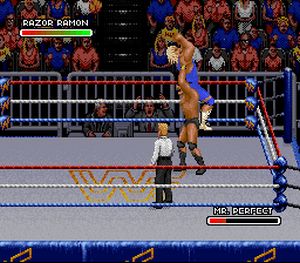 As later genre entries would show me, wrestling games live die by their options and match types. Where Royal Rumble's options were par for the course at one time, nowadays they'd be considered a humble offering. While No Holds Barred mode and the Royal Rumble itself are appreciated additions, they pale in comparison to the features that other 2D wrestling games offer. This is not only true about other games' match types, but also their customizable rules and options. For instance, most Fire Pro games allow you to modify the fall type, acceptable submission holds and chokes, whether or not wrestlers can rope break, or even how likely they are to knock the other wrestler unconscious.

In other words, I'm not saying at all that Royal Rumble is a horribly broken, unplayable game. It's mechanically solid, after all. What I am saying is that it's difficult to recommend it over an opulence of 2D wrestling titles that offer a wider variety of features and match types. Such is the life of a wrestling game, though. Eventually another title is going to come along and knock it off its pedestal, and from there its a painful drop to the bottom.

So it goes, as well, with maturation. Not only have I matured enough to the point that many of my old favorite IPs are now considered guilty pleasures or pure nostalgia, but the gaming industry has matured enough that some games are now redundant. WWF Royal Rumble may have been one of my favorite games in 1993, but it's sadly locked in that era. In order for me to find it as enjoyable now as I did then, I'd have to hit my head just hard enough to forget all that I've learned and experienced since 1993.

In closing, I'll only say that there's no reason to play Royal Rumble over any wrestling game that has come out since 1994.

If you enjoyed this WWF Royal Rumble review, you're encouraged to discuss it with the author and with other members of the site's community. If you don't already have an HonestGamers account, you can sign up for one in a snap. Thank you for reading!

© 1998-2020 HonestGamers
None of the material contained within this site may be reproduced in any conceivable fashion without permission from the author(s) of said material. This site is not sponsored or endorsed by Nintendo, Sega, Sony, Microsoft, or any other such party. WWF Royal Rumble is a registered trademark of its copyright holder. This site makes no claim to WWF Royal Rumble, its characters, screenshots, artwork, music, or any intellectual property contained within. Opinions expressed on this site do not necessarily represent the opinion of site staff or sponsors. Staff and freelance reviews are typically written based on time spent with a retail review copy or review key for the game that is provided by its publisher.