Crow. It might be the main reason I don't love Quackshot like I used to, or like I thought I used to. It was important to me that I revisit this old favourite, as it was always a lock for a top spot on my list of the best Sega Genesis had to offer, and for my list of top mascot platformers across all systems. Let's fire up Donald's classic, greed-motivated quest and feel the magic once more, I thought. But before I did so, I somewhat absentmindedly perused the two reviews for the title on this very site -- both efforts from folks I know in the hardscrabble reviewing game. GUTS raved that the game was "kickass." Hear, hear! Then I read Jason Venter's lukewarm take, and scoffed, like, out loud. What was the matter with this fool?

So anyway, I replayed the game after that. And, well...

He was kind of right! (I hope he's not reading this.) And thus: crow. We know that there are oldies that age well, and those that do not. Quackshot does not; however, that isn't to say it's not a decent, cutesy platformer with its share of positives. It's just not the crowning Disney achievement that our rose-tinted Ray-Bans had us believing it was. It's not the second coming of Castle of Illusion. (I'm right about that one -- I held my breath, replayed it, and it still stands up, I promise.) 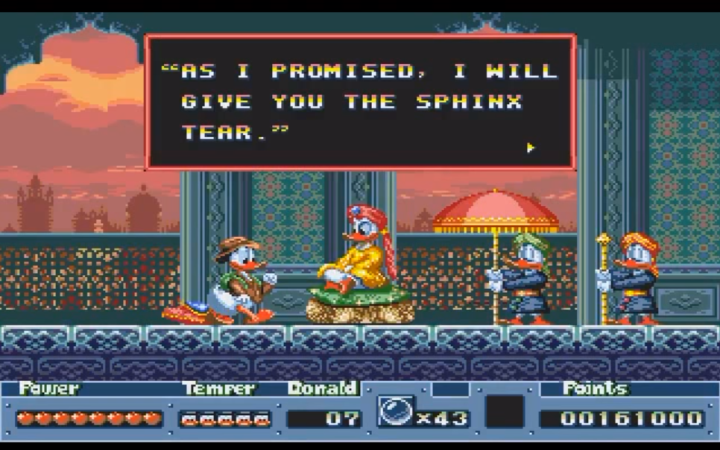 But that's okay, as Donald still has something to offer. He's off on a mission to locate the lost treasure of the ancient King Garuzia of the Great Duck Kingdom, but perennial bad guy Pete hears Donald's machinations and deploys an army of clones (as you do) to block the duck's paper chase (meanwhile, Donald's uncle consistently tops the Forbes' list of top earning animals -- for shame, Scrooge). The map we're relying on reveals four locations, all instantly accessible, from Duckburg to Transylvania. Once those are out of the way, another four pop up that need conquering; consider the back half of the game a much more difficult B-side.

Each level has an easier outdoor section, followed by a more taxing crypt sequence. In an interesting but ultimately irrelevant and odd move, after beating that first stretch of each location, Donald will drop a flag and hit a wall that will require some special item in order to continue on to part two. You'll call in your nephews-operated plane, and try another place on the map, and beat part one there. Doing so will reveal the item you needed and it's back to the first location, but you'll bypass part one and go straight to the flag. Beat part two here and be rewarded with an item that will unlock progress in one of the remaining two locales.

In other words, Quackshot has you running around a lot. And I don't think the game is better for it. 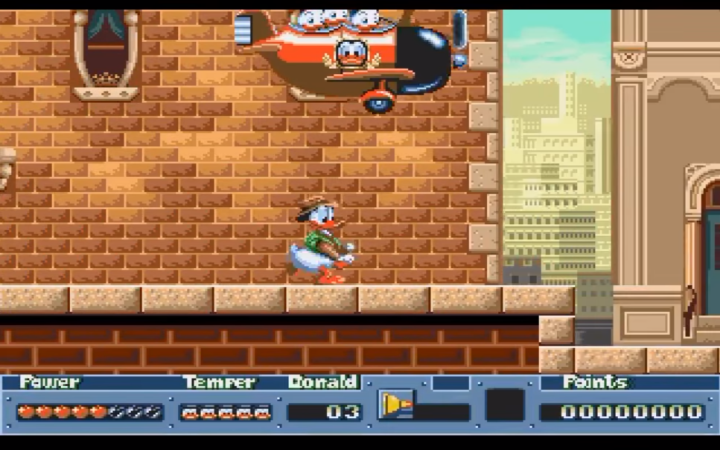 Thankfully, though the level-to-level progression might be convoluted, the in-level action is pretty straightforward. Donald is Tomb Raider before Ms. Croft, and in the face of hidden dangers, he's armed appropriately, with a gun that primarily shoots toilet plungers. If a plunger hits an enemy (usually one of Pete's doppelgangers) they'll be stunned temporarily, giving you enough time to slip past. Plungers are infinite and will be upgraded to create makeshift ladder rungs against walls, and later to hitch rides with unwilling birds overhead. Donald can also fire corn, in a spread that does its damage in a much more permanent fashion, but ammo is limited. Finally, he can procure a bubble shooter that takes out certain walls and enemies (it'll take some trial and error to figure out which).

Occasionally, Donald can find and ingest hot peppers and completely lose his shit. He'll take off running like a maniac and will be temporarily invincible. It's a strange inclusion and it's not really necessary, because death from enemies -- aside from the often very tough bosses -- is not really a thing in Quackshot. Death within the levels comes from missing jumps. You'll miss a lot of them, and as you fall to your instant death, your rather generous vitality bar will seem to mock you. Because what use is it?

You have unlimited continues, sure, and for the most part, the game is actually a pushover. But there are sequences deep in the adventure that require prior knowledge and a great deal of patience to get through. There'll be falling platforms you couldn't have seen coming, and precise jumps you'll have trouble executing given Donald's lack of agility. He is plodding and imprecise throughout, but those deficiencies won't trouble you until here, near the end where frustrating jumps are many and levels are long. 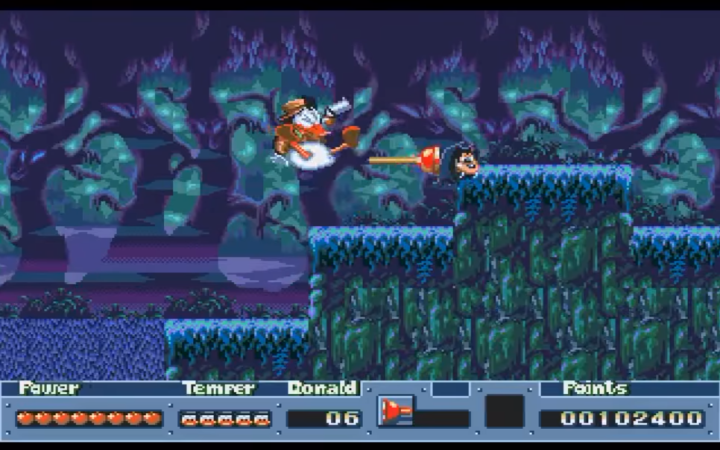 So I didn't love Donald's movement in Quackshot, as though through water, and I liked it even less when he was called upon to be a platforming guru when the skills aren't naturally in his wheelhouse. In light of all of this, I think back with some consternation on why I used to love the game -- because I definitely did. The music is fantastic, especially the boss theme. It gives you the impression you're doing something more important than you are. And the graphics are cartoon-ready: the look of the game is generally on par with Castle of Illusion, and that's saying something. Was I so easily taken with sweet presentation in Quackshot's heyday? Were we all? Did the contrived backtracking propped up as story-advancing globetrotting, trick us into thinking there was more depth here?

It's both of those factors and more; we were probably just hungry for more Disney-based platforming greatness, and on its face, Quackshot looked to fit that bill. But in truth, the package is slick, but Donald himself is not; the opening levels which introduce the international fetch quests seem silly, but the later levels are a serious business, for the wrong reasons. Quackshot is a decent time, but can easily feel like a slog, and that's a real shame.

If you enjoyed this Quackshot Starring Donald Duck review, you're encouraged to discuss it with the author and with other members of the site's community. If you don't already have an HonestGamers account, you can sign up for one in a snap. Thank you for reading!

© 1998-2021 HonestGamers
None of the material contained within this site may be reproduced in any conceivable fashion without permission from the author(s) of said material. This site is not sponsored or endorsed by Nintendo, Sega, Sony, Microsoft, or any other such party. Quackshot Starring Donald Duck is a registered trademark of its copyright holder. This site makes no claim to Quackshot Starring Donald Duck, its characters, screenshots, artwork, music, or any intellectual property contained within. Opinions expressed on this site do not necessarily represent the opinion of site staff or sponsors. Staff and freelance reviews are typically written based on time spent with a retail review copy or review key for the game that is provided by its publisher.