When Nintendo unveiled Flip Wars during a Nintendo Direct video timed shortly ahead of the game's release, viewers were shown a lively action/puzzle game wherein several colored warriors run around an arena, jumping and stomping on tiles to change their color and dominate the available space. It looked pretty neat.

Now that I've played Flip Wars for myself, I know the video was accurate up to a point. That particular segment was also quite brief, though. One explanation for the brevity no doubt was the same self-imposed time restriction that prevents most Nintendo Direct presentations from going on for too long and potentially prompting their audience's attention to waver. There may also have been some other factors at play, as well. In my opinion, the biggest advantage of such an approach was that it allowed the game to appear as it is best played: ever so briefly, before you move onto something more interesting. 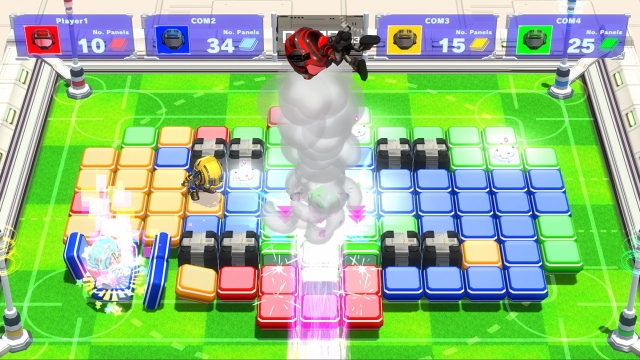 As the video made pretty clear, your goal when you play Flip Wars is to claim space. You do so by hopping into the air and slamming down, which flips over the nearest few tiles that extend above and below you, and to the left and right. The arena is viewed from a top-down perspective, like in a Bomberman game, and there are power-ups positioned around it. You can pass over these to improve attributes such as speed, to become invincible, or to change your strikes so they instead extend diagonally. When you move over spaces of your own color, you do so with reasonable haste. If you are on a tile of another color, you trudge along in no particular hurry, like a schoolboy on his way to the principal's office.

Before a battle begins, players can settle on the objective, the arena, and the desired time limit. You can elect to play locally with friends and/or AI (three difficulty settings are available for any characters the computer controls), or you can connect to the Internet and challenge strangers from around the world (though I waited for several minutes and never was able to find an online match, which is odd for a Nintendo-published title released on a platform as popular as the Switch). The primary thing distinguishing one match from the next one, ten or fifty matches is the rule set. Once you have set everything up, you can keep playing with all of the same settings in effect, or choose entirely new settings. The interface takes an all-or-nothing approach, so that you can play repeatedly with the exact same terms or you can start from the beginning and make completely new selections. That feels unnecessarily tedious, much like the overall game.

A moment ago, I hinted that there are multiple objectives. To be precise, there are three of them. You can simply try to claim the most tiles for your color before time expires, or you can try to knock the other players off the board more times than they knock you off, or you can try to be the last one standing in a match where everyone begins with only three lives. When I played with my friends, we favored the second of those options, because it allows everyone to have a real chance at winning for an entire match's duration. It's no fun being knocked out early and then having to sit back and watch as your other friends compete for whatever remains of the time limit. 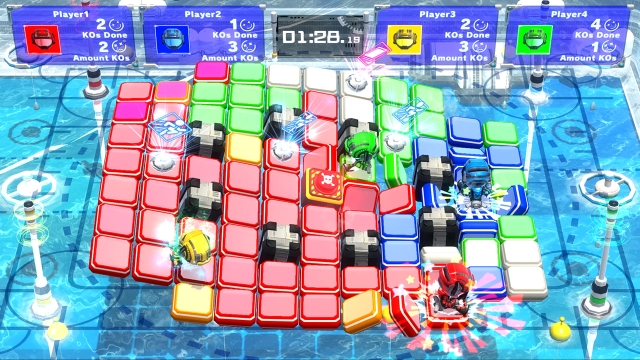 I also mentioned there are multiple arenas. These are divided first by color. Arenas are red, yellow, blue and green, like the combatants. Green is bland and basic. Blue introduces a wave element, which causes the board periodically to ripple and stun everyone who is standing when a wave strikes. Yellow features periodic strikes of randomized lightning. Red causes a large portion of the play area to heat up on occasion, and you want to make sure you're not standing in the wrong place when the temperature gets too high. Depending on the layout, you might run into additional quirks, such as blocks, turrets, or spinning discs.

The game's controls are simple and responsive, though they feel a bit clunky just because your characters move with the aforementioned lack of urgency. After you leap into the air, you will automatically pound tiles when you land, without the need to press a second button. On the one hand, this is good. The lack of complexity ensures everyone is able to maneuver and strike, regardless of skill and familiarity. However, the design also eliminates an option for complex strategy, since your timing won't change much. You have to risk a jump and a slam to claim tiles or attack your foes, but if they leap into the air just after you and come down a split-second later, you're the one who will likely feel the pain. 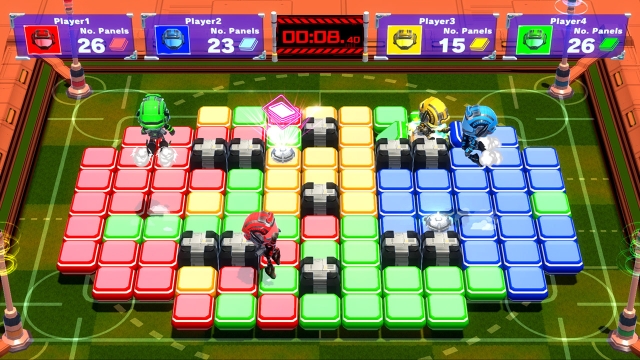 Flip Wars builds on an idea that isn't bad, and executes it competently. You've probably played other games that employ similar rules, and the developers at Over Fence did a decent job of making sure this particular arena battler remained bright and cheery. The action is easy to follow, and the primary colors nicely complement one another on the screen. The music is a bit on the dull side, but doesn't serve as a distraction, and menus are clean even though they're not always intuitive.

There isn't any one overbearing problem with Flip Wars. It plays things too safe, though, and doesn't do enough with its premise. There aren't a lot of interesting power-ups, the action is too sluggish, the arenas don't feel distinct enough, and there aren't many modes to add additional variety once you get tired of stomping on titles. Really, the whole affair reminds me of a typical mini-game in a Mario Party title. You might enjoy playing that mini-game in small bursts (especially if you win and earn coins that go toward some broader overall objective), but otherwise you will probably tired of it within a few minutes. So it goes with Flip Wars. I can imagine the experience keeping very young children engaged for perhaps a happy hour or two, but even they are likely to soon conclude there are much better experiences available on the platform and elsewhere... and probably for less money.
2/5

If you enjoyed this Flip Wars review, you're encouraged to discuss it with the author and with other members of the site's community. If you don't already have an HonestGamers account, you can sign up for one in a snap. Thank you for reading!

© 1998-2020 HonestGamers
None of the material contained within this site may be reproduced in any conceivable fashion without permission from the author(s) of said material. This site is not sponsored or endorsed by Nintendo, Sega, Sony, Microsoft, or any other such party. Flip Wars is a registered trademark of its copyright holder. This site makes no claim to Flip Wars, its characters, screenshots, artwork, music, or any intellectual property contained within. Opinions expressed on this site do not necessarily represent the opinion of site staff or sponsors. Staff and freelance reviews are typically written based on time spent with a retail review copy or review key for the game that is provided by its publisher.