Upon release, Null & Peta was commonly seen to be a decent platformer. It was pretty barebones, but pretty nonetheless, boasting colourful cartoony graphics to bring it in spec with the anime it was based upon. But it has its share of issues; the simplicity of the title didnt mesh particularly well with its brief lifespan, boasting only five stages total, which meant you could see the thing off in a couple of hours comfortably. Theres a goofy plot present, which is told both through laudable voice acting and obligatory visual novel-y text boxes. This isnt uncommon, but that the text ignored the box borders and sometimes roamed recklessly off the screen certainly was. In an effort to not have to talk about this bug (which has worked out GREAT), I hid laziness behind a veneer of professionalism and waited on the fix. That fix has come, alongside a major update, adding two whole new stages directly accessible after completing the original five.

So. The new Null & Peta is a still a decent platformer, but now its a bit longer and the rebellious text has been tamed.

Glowing praise not included, I know. Its a little bit difficult to pigeonhole the game into a genre, as it has a pop at doing several different things. Only, it doesnt really excel at any of them. I guess its best described as an action platformer with light exploration themes, making it a diet Metroidvania of sorts. Its certainly keen to have you explore its five seven levels. In fact, its downright insistent. Drop into a themed stage, plat all the forms, and youll find the portal to an obligatory end-of-stage big boss. But the portal is locked. To open it, you need to find myriad anime-related items hidden in the corners of each multi-faceted stage. 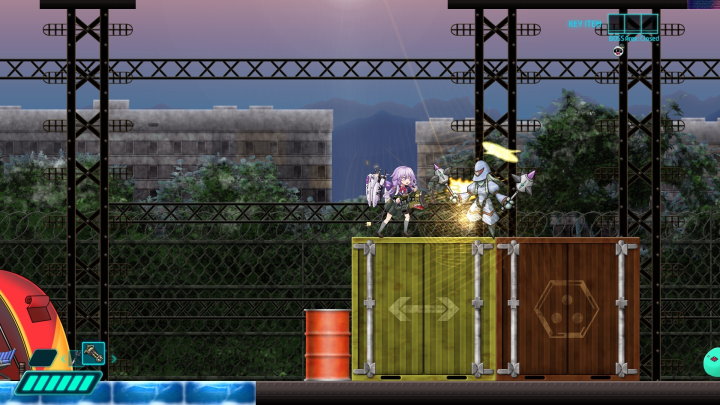 I dont necessarily consider that a bad thing; the world of Null and/or Peta is resplendent, gloriously decked out in frisky anime sheen. Exploration is further rewarded by discovering landmarks lifted from the anime to relive in videogame form, triggering little cutscenes and delightful artwork aplenty. Even the playable sister, Peta herself, is bloody adorable, holding her skirt in place when she falls from heights or struggling to handle heavy weaponry. She can just about manage swinging her starting weapon of a giant wrench about, but shell soon discover a massive chaingun. Thats slightly more of a hassle for her.

Weapons are usually the spoils of war for taking down one of the big bosses. These are impressive looking foes, but can usually be beaten via reckless charge, smashing your attack button and safely assuming their health bar will give out before yours does. That is, of course, unless youve picked up a plentiful PETABOT power up which grants you limited invincibility, wherein you can just rub your face on the target until it explodes.

Thats more or less the apex of the combat side of the game for you, sadly. The platforming levels are littered with pallet-swapped bug enemies that only vie to be more than a mild nuisance should the small number of their projectile-spewing brethren be present. The new stages certainly do their part to dial up the challenge, but they do so by playing up their platforming and exploration chops, tucking portal items away in harder-to-reach corners. At best, it makes good use of genre tropes youve seen before like scrolling or disintegrating floor panels you need to travel at speed. At worst, it leans into its Metroidvania inspirations, asking you to constantly change equipment you find hidden throughout the stages. Theres different footwear that lets you safely walk across different dangers, for example, or power gloves that let you shift heavy blocks aside to free up new areas. But theres no quick-change option available; every time you need to make use of a new bit of equipment, you have to pause the game, go into an equipment sub menu, and pick your item of choice. 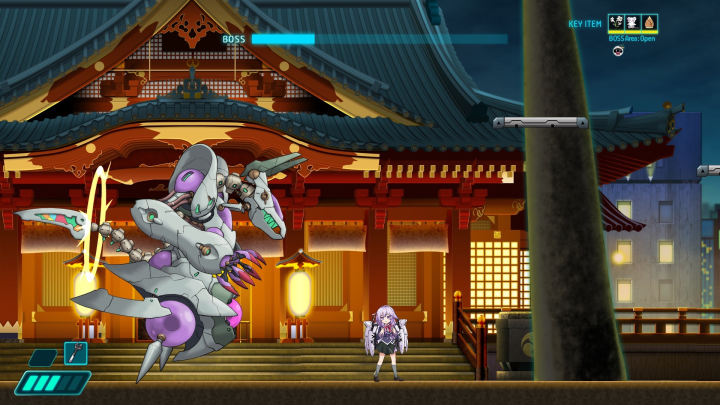 Its a clunky and clumsy solution to a game that often feels like its indulged a little too heavily in clunky and clumsy. And yet, everything is so well presented youll sometimes stumble across little instances that help you forget that from time to time. Like Nulls continued attempts to avoid her sisters home cooking, or how Petas only undertaking the entire adventure to ensure Null has no excuses to start attending her new school once the weekend is over. It looks and sounds and acts like a labour of love erected by a devout fanbase of the anime. Commendable though their efforts to reign in their wandering text are, it behaves like they perhaps havent quite got to grips with the gaming part of the equation yet.
2.5/5

If you enjoyed this Null & Peta -Invasion of the Queen Bug- review, you're encouraged to discuss it with the author and with other members of the site's community. If you don't already have an HonestGamers account, you can sign up for one in a snap. Thank you for reading!

© 1998-2020 HonestGamers
None of the material contained within this site may be reproduced in any conceivable fashion without permission from the author(s) of said material. This site is not sponsored or endorsed by Nintendo, Sega, Sony, Microsoft, or any other such party. Null & Peta -Invasion of the Queen Bug- is a registered trademark of its copyright holder. This site makes no claim to Null & Peta -Invasion of the Queen Bug-, its characters, screenshots, artwork, music, or any intellectual property contained within. Opinions expressed on this site do not necessarily represent the opinion of site staff or sponsors. Staff and freelance reviews are typically written based on time spent with a retail review copy or review key for the game that is provided by its publisher.