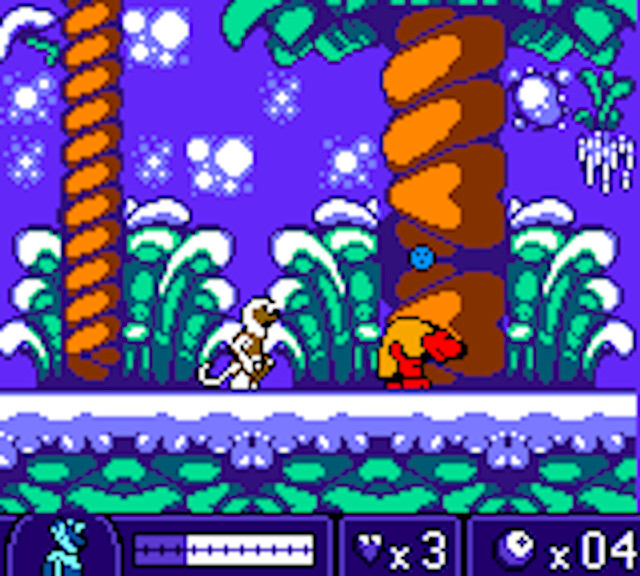 Zoboomafoo: Playtime in Zobooland is a tough game to evaluate. This isn't your average retro platformer, but one that presents itself as a piece of "edutainment." In other words, it was initially marketed to children, particularly those familiar with the similarly named television program that appeared on Public Broadcasting System. As such, the game doesn't aim to be a soul-crushing experience rife with complex platforming or tons of challenging segments. Hell, its difficult settings consist of easy, easier and easiest.

For those who aren't familiar with the show, it's a children's nature series starring the Kratt brothers. Each episode typically begins with both guys hanging out with a lemur named Zoboomafoo (or just Zoboo), who is later replaced by a talking puppet. The show occasionally cuts to brief clips of nature footage or animated segments, but remains focused on dishing details regarding various animals, habitats, behaviors or other biological facts. Though I've watched plenty of PBS shows with my kids, I never caught "Zoboomafoo." I am, however, more familiar with the current Kratt brothers' cartoon, "Wild Kratts."

By now, you're probably wondering who would be interested in playing this long-forgotten Game Boy Color title in 2020 (or beyond). Platformer vets will likely sit this one out, as it's intended to be simple beginner's fare. Scratch a vast majority of modern players because they're not interested in antiquated licensed products. Even today's children probably won't enjoy this piece much, because kids tend to more attuned to modern tech rather than handheld relics. However, there is a paper-thin audience here that would might be interested in digging this title up, consisting mostly of retro gamers looking to revisit GBC's library or anyone nostalgic for the TV series.

And even then, they're only going to find the most straightforward of experiences here... 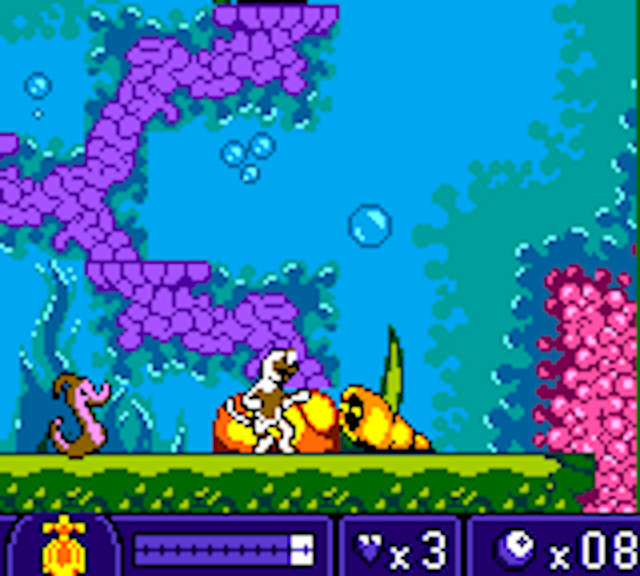 Playtime starts out a bit like Mega Man, where you have eight side-scrolling platformer stages to select. In each one, you assume the role of Zoboo and seek out a specific animal, who sends you on a basic fetch quest. Once you find the coveted item, you return to the critter and the level ends. Zoboo then receives one of his missing collectible cards, which displays a random zoological fact. Really, these prizes exist only to give you the false impression that this title might be educational, as they only offer the most basic info. They state things like "earthworms burrow in the ground" or "foxes sometimes live in deserts," both of which tell you the game is only interested in performing the bare minimum to qualify as educational.

Personally, my favorite card is the spider, which tells you that they have eight legs and eyes. Except the cartoon spider depicted on the screen, who possesses a mere two eyes. Poor little bugger...

To this game's credit, its levels are actually well designed. They're as colorful and lively as any adventure aimed at younger audiences should be, decked out with decently detailed backgrounds and environments that mirror their inspirations terrifically. The developers at Vicarious Visions even managed to craft desert and cave stages that aren't visually boring. Levels also impress in terms of layout, eschewing the standard "just advance from the left to the right" manner of progression. Each stage provides a fairly intricate network of platforms and obstacles without overwhelming its players. You'll find plenty of floating platforms and out-of-the-way corners that are perfect for hiding objectives, but nothing that's incredibly hard to overcome. 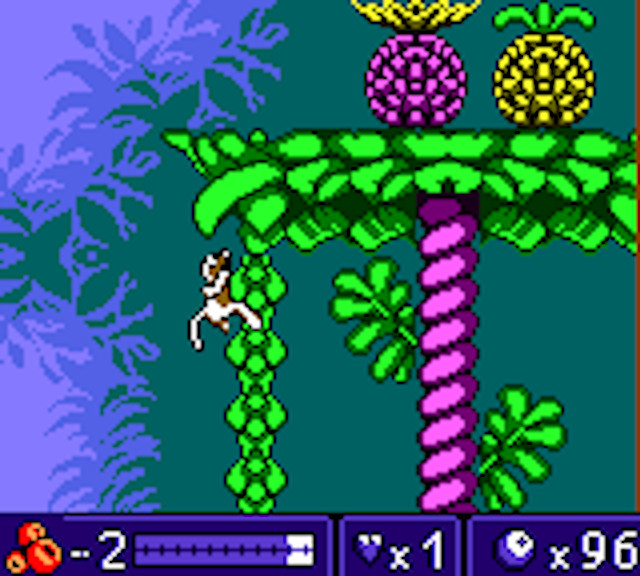 Food and creatures practically litter each of these stages. You need to collect the former of these to keep from starving, a la Adventure Island. Yes, you have a "hunger" meter that slowly empties over time, but also drains a bit when you collide with foes. If you're worried about combat and violence, rest assured that this game doesn't feature any sort of killing or bodily harm. The "enemies" you meet are actually famished animals, and Zoboo feeds them some of his store of fruit or mushrooms or whatever it is he's carrying for that level. Also, he doesn't die when his energy depletes, but instead falls asleep. You can tell by the little Zs floating over his head.

At first, you might have some trouble differentiating hungry animals from friendly ones. Thankfully, icons float over the heads of the hungry ones, indicating that you should probably stay clear of them. Also, some of the NPCs you encounter don't drain your health, and instead either speak to you or give you hints. However, their presence grows annoying, especially when you continuously bump into ones that only say, "Hello." The game actually stops all action to open up a dialog box to accomplish this.

If you're an older gamer who's at least decent at platformers, this title shouldn't take you too long. At first, its mechanics might seem awkward, but acclimation sets in after a little practice. Mainly, Zoboo's jump is odd because it's a bit delayed and somewhat stiff. Even then, getting through this in one sitting isn't a problem. Heck, I was able to finish the campaign in under an hour, including the final "bonus" stage (which I cleared in about two minutes). Suffice it to say that I personally didn't care much for this title, but then again I wasn't part of the target audience... 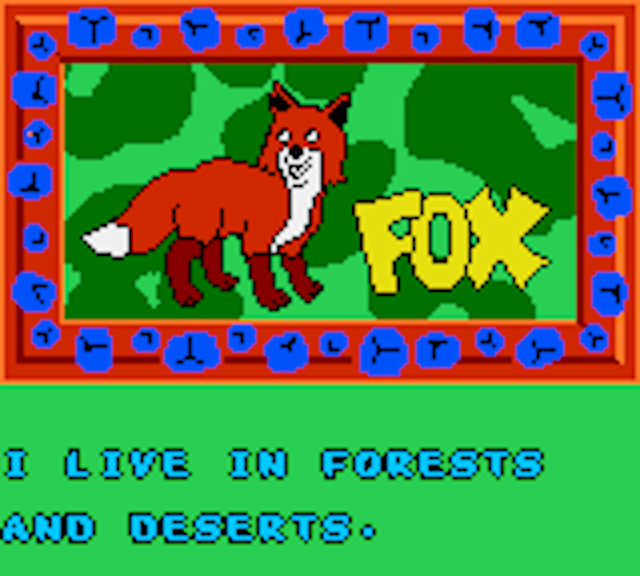 As games aimed at kids go, this one is merely okay. It's not as educational as it boasts, but it offers a decent elementary-level platforming experience for anyone looking to get their feet wet. Let's be honest, though: almost no one today would be interested in this game, even despite its stunning lack of bugs and breaks. More than anything, it should serve as a reminder that every piece of media has a shelf life, and categories within various medium types sometimes age at varying rates. Still, some folks might want to revisit this title so they can remember their childhoods, and I can at least assure them that Playtime is a safe, playable title you can replay in short order.
2.5/5

If you enjoyed this Zoboomafoo: Playtime in Zobooland review, you're encouraged to discuss it with the author and with other members of the site's community. If you don't already have an HonestGamers account, you can sign up for one in a snap. Thank you for reading!

© 1998-2020 HonestGamers
None of the material contained within this site may be reproduced in any conceivable fashion without permission from the author(s) of said material. This site is not sponsored or endorsed by Nintendo, Sega, Sony, Microsoft, or any other such party. Zoboomafoo: Playtime in Zobooland is a registered trademark of its copyright holder. This site makes no claim to Zoboomafoo: Playtime in Zobooland, its characters, screenshots, artwork, music, or any intellectual property contained within. Opinions expressed on this site do not necessarily represent the opinion of site staff or sponsors. Staff and freelance reviews are typically written based on time spent with a retail review copy or review key for the game that is provided by its publisher.