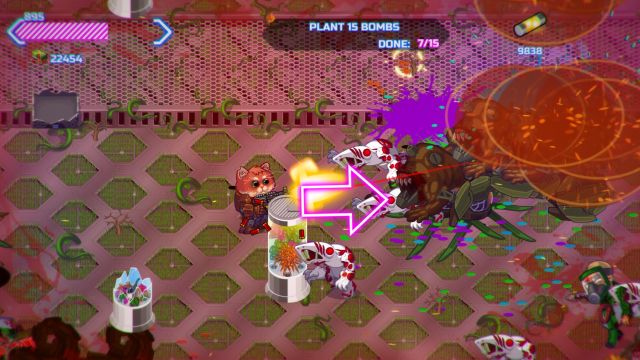 Life is difficult, and everyday stress, excitement, and responsibilities sometimes mash our brains to jelly. When that occurs, some of us shut our minds off and enjoy an unpretentious piece of entertainment and maybe a stiff beverage. In the gaming world, this means playing either an undemanding and cute offering or an adventure packed with explosions, gory splatters, and violence.

Bear in mind that those two categories are not mutually exclusive...

Armored Kitten magically qualifies as an example of both types of games, providing an experience where you guide a bipedal feline down numerous straight corridors teeming with giant maggots, zombies, mutants, demons, and robotic scorpions. As you mosey onward, you hold down a single button and watch as projectiles shred the oncoming horde to greasy bits. Your fallen foes (as well as any environmental fixtures caught in the crossfire) drop helpful power ups, cash, and additional ammo, which only expedite the mass murder process.

Each level comes with its own condition for victory. You might have to survive for a certain amount of time, advance a particular distance down the hallway, guard or escort a robot, or even plant bombs in arbitrary locations. None of those details matter much, though, because the game's mechanics, truckloads of ammo and restoration items, and assortment of upgrades and new weaponry render you perpetually overpowered. The only time you might perish in battle is if you're careless or you're actually trying to die. Regardless of the mission at hand, you can easily rise to any occasion by holding down the fire button and pressing onward while swaying your gun to and fro.

I think you can see where a problem might form... 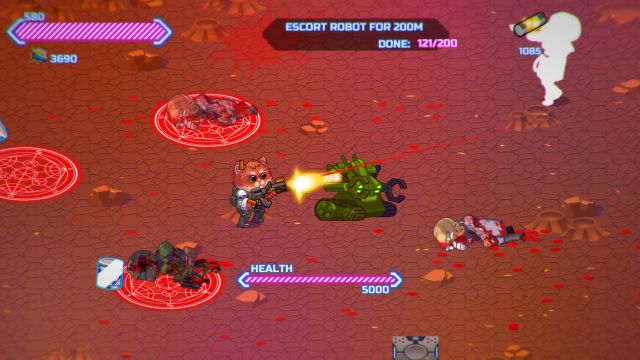 Titles like this benefit from brevity. You'd be hard pressed to find someone who wants to suffer through more than three hours of mindless, repetitive mayhem. Hell, even three hours is pushing it. Unfortunately, Kitten's campaign easily provides eight hours of tedious, inane slaughter. By the time you've gotten a quarter of the way through the campaign, your jellied brain should've mostly reconstituted. By that point, you'll be craving more complex or varied challenges, rather than charging through seemingly endless tidal waves of monsters with minimal effort. Suffice to say, the title grows wearisome very quickly, mostly because it sports barely any variety.

Chances are pretty good you'll give up and move on to more entertaining experiences before long. The stubborn sorts, like myself, will unfortunately struggle through this bothersome quest to the end, and witness some questionable design choices along the way. For instance, you can easily get through timed survival segments by leaving the last foe of a wave alive. You see, these stages don't spawn an endless supply of demons, but send them at you in waves. The next wave only arrives when all of the previous one has been put down. If you leave the final target unscathed, you'll be stuck with just a single monster chasing you around while the timer continues to tick. Instead of killing it, you could just run to the right and farm cash and bullets until the buzzer goes off.

Another stage sees you taking out four hundred undead soldiers. These beasts don't appear right away, though. Each stage only spawns one type of adversary at a time as you advance, and the only way to get another category of killer to arrive is to forge onward. The zombies in question are the fourth type of foe to show up, meaning you'll have to slog through three other types of monsters before they arrive. Unfortunately, when those zombies finally do make their appearance, you'll still have to deal with a mixture of the previous three enemy types. As a result, you can only bump off so many soldiers at a time. Here's the real kicker, though: levels reset after you reach a certain point, and you'll eventually find yourself only blasting the initial wave of adversaries again. By that point, you should have only killed about 180 soldiers, so you'll need to go venture through the level a full three times in order to complete it. Believe me when I say that it takes forever, and a game this basic shouldn't include challenges this drawn out. 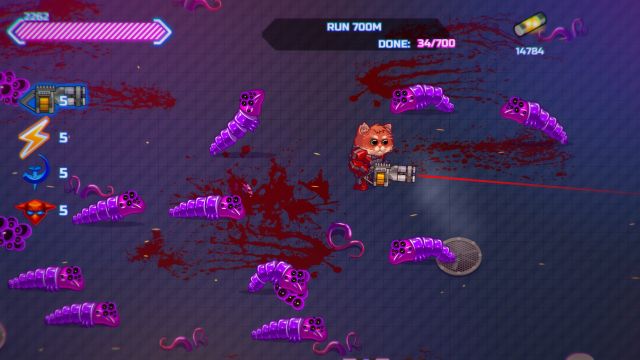 By far, the bomb-placing missions constitute the worst experiences Kitten has to offer. Here, you advance until you locate a spot to place a bomb, where you hold still for eight seconds. Getting to these locations is often irritating because they're heavily guarded. Once you've settled onto one, you might still have to interrupt your count to avoid the coming mosh pit of murderers. After you've placed the bomb, you begin the process anew, trudging to another location where you do nothing but stand there and stare off into space. Again, these stages eat up much more time than they should, especially since they require you to burn through fields of creatures, only to hold still for a while.

By the time I reached the conclusion during my own playthrough, I struggled to remember any segments I particularly enjoyed. The truth was the game offered no real bright spots, and I only perked up when entering fetch quest stages. However, my enjoyment of those stages didn't come from entertainment value, but because they were mercifully short and easy. Basically, I found myself only digging this game when I was subjected to the briefest bits of its tediousness. That should tell you something...

Mindless titles have a place in this world, but only serve that purpose for so long. They outlive their usefulness quickly, which is why their offerings should be kept short and sweet. Armored Kitten might start off as a terrific, worry-free action romp, but it drags on for much too long. The game stales before you even clear the middle point, leaving you about five more hours of fighting the same mob of monsters repeatedly. If you intend to pick this product up regardless of the tedium it offers, then I recommend only visiting it once in a while, on days when the woes and wonders of the world have once again reduced your gray matter to marmalade.

If you enjoyed this Armored Kitten review, you're encouraged to discuss it with the author and with other members of the site's community. If you don't already have an HonestGamers account, you can sign up for one in a snap. Thank you for reading!

© 1998-2021 HonestGamers
None of the material contained within this site may be reproduced in any conceivable fashion without permission from the author(s) of said material. This site is not sponsored or endorsed by Nintendo, Sega, Sony, Microsoft, or any other such party. Armored Kitten is a registered trademark of its copyright holder. This site makes no claim to Armored Kitten, its characters, screenshots, artwork, music, or any intellectual property contained within. Opinions expressed on this site do not necessarily represent the opinion of site staff or sponsors. Staff and freelance reviews are typically written based on time spent with a retail review copy or review key for the game that is provided by its publisher.