There are few activities in a video game that could be more enjoyable than driving through thick clouds of life forms at intense speeds. Now and then a violent driving game reminds me of this simple pleasure, usually when I floor the gas pedal until the world around me blurs and my ears fill with the imposing roar of my car's engine. Finally, a chorus of gushy splats replaces the steady rev, accompanied by a series of sickening thumps and thuds. Personally, I find that the everyday pedestrians featured in most vehicular homicide simulators don't always make ideal targets, as locating a dense enough horde of them to suit my cathartic purposes can prove to be a daunting task. Honestly, I can't imagine a creature better suited to serve as a speed bump than a zombie. They roam in herds and they'll always seek you out, thereby saving you the trouble of searching a whole city for an adequately-sized crowd of them. It was that train of thought that eventually led me to the game Zombie Driver HD, an ape of the original Grand Theft Auto series with an undead spin.

At first, Zombie Driver HD proved to be a worthy Steam sale purchase. I found every inch of each stage infested with scores of zombies to splatter. As I had I predicted, they all tended to gather in hordes, allowing me to punch the gas and hear that satisfying squish time and again. Even better, the game features a nitrous booster that launches your vehicle at ridiculous velocities. And it serves up double the punishment, too: any ghoul unfortunate enough to stand behind your ride catches a face full of flames, reducing them to undead cinders. As you can guess, I had a difficult time remaining focused on mission objectives in the early outs of the campaign, as the desire to turn walkers into roadkill was impossible to ignore.

Of course, my vehicle wasn't the only weapon I had at my disposal. Since I couldn't leave the car, I needed more advanced weaponry, and Zombie Driver HD was more than happy to supply me. Rockets flew from my hood, terminating in crowd-vanquishing explosions, and flames leapt from a nozzle attached to my rig, barbequing the undead. Mostly, I stuck with the minigun because it thinned the herds more effectively than anything. 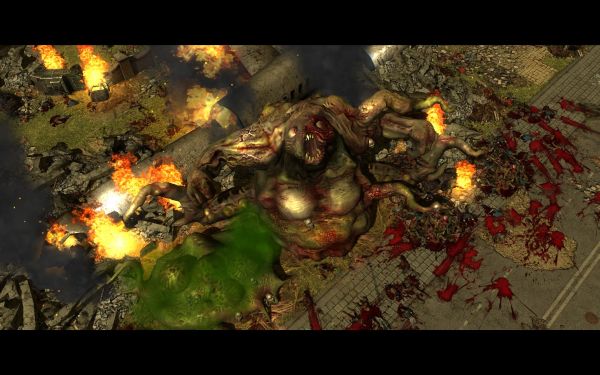 The more biters I snuffed out, the fatter a post-level paycheck I received. With a heftier stack of cash, I could afford an impressive number of upgrades for the various cars I had acquired throughout the campaign. It's thanks to my income that my police car, limo, bus, and top secret military roadster were able to take on the vast swarms of zombies that manifested late in the campaign. It's especially useful that I could upgrade my defenses, as there tended to be multiple Gauntlet-like destructible spawning points present in each mission. Suffice it to say that I was overrun more than a few times, and it was nice to have some reinforced armor to mitigate the damage.

Unfortunately, I'm running low on praise for Zombie Driver HD. Sure, there are a few missions that provide you with a tank, whose shells can wipe out herds like no one's business, but the game still lost its charm somewhere after the halfway point. 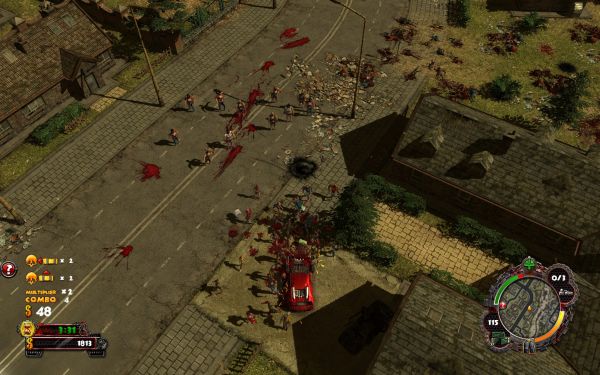 Although there were multiple cars to upgrade, I found myself ignoring most of them and focusing on only a few vehicles. That left me wondering why the game offered so many different rides for you to trick out if most of them were going to end up obsolete anyway. It would have been more preferable to showcase a line of vehicles with various advantages and drawbacks, rather than have maybe two or three that rule the roost.

Occasionally, the game would glitch as well. Sometimes I'd hit a piece of environment and my car would land on its side. Typically, I would respawn somewhere nearby, turned right side up. Sometimes, though, the respawn would fail to engage and I'd have to sit and watch as the walking dead dismantled my car. This occurred a few times in the middle of tough missions, usually when I was kicking major tail.

Although I'm not prone to motion sickness, I would be remiss were I not to mention that the game's movements can be quite dizzying. Any time I needed to execute a donut, the screen would rotate in a hypnotic manner. I had trouble focusing during moments like that, and I could only imagine that I would upchuck were I motion sick.

Zombie Driver HD's biggest drawback, though, was that the game was repetitive as all get out. Yes, I expected as much. There aren't many zombie-killing games that aren't chock full of basic combat repeated ad nauseam. After a while, crushing hordes of zombies became tiresome. I desired variety, and thought that the game could deliver by providing a plethora of mission types. No such luck, unfortunately. Most of the missions consisted of rescuing survivors and bringing them back to my base. Each such mission rose and fell in a familiar arc, usually beginning with a long drive to an overrun building, eventually segueing into a firefight against oodles of zombies and their spawning points. Now and then I'd have to drive away from an objective to nab some health or weapon refills. Fully restored, I would return and utilize the same strategies until the field was clear of shambling corpses. Wash, rinse, repeat: that's all it takes to secure an endangered building. 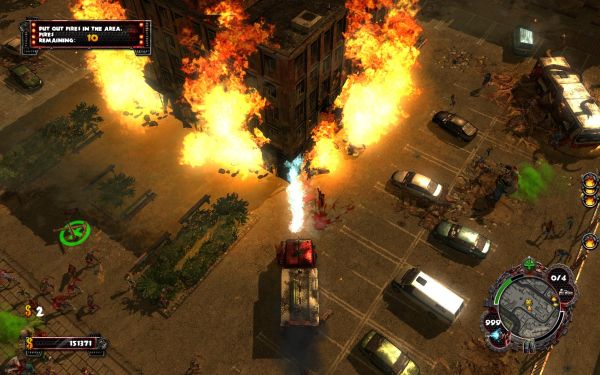 The game did have a few other mission types, but even those were repeated several times. There's only so many occasions a gamer can "destroy X spawning points" or "defend zombie repellent equipment" before the experience wanes. Although Zombie Driver HD is thoroughly action-packed, the abundance of violence becomes desensitizing before the game's conclusion.

Zombie Driver HD is not a bad game, though. It's still above average in my book, it's just that its dearth of variety is more noticeable than it should be, and its wealth of action alone isn't enough to keep the experience exciting forever. It's a decent thrill ride for anyone who needs a palate cleanser, but ultimately there are many superior zombie slaying titles out there.
3/5

If you enjoyed this Zombie Driver HD review, you're encouraged to discuss it with the author and with other members of the site's community. If you don't already have an HonestGamers account, you can sign up for one in a snap. Thank you for reading!

© 1998-2020 HonestGamers
None of the material contained within this site may be reproduced in any conceivable fashion without permission from the author(s) of said material. This site is not sponsored or endorsed by Nintendo, Sega, Sony, Microsoft, or any other such party. Zombie Driver HD is a registered trademark of its copyright holder. This site makes no claim to Zombie Driver HD, its characters, screenshots, artwork, music, or any intellectual property contained within. Opinions expressed on this site do not necessarily represent the opinion of site staff or sponsors. Staff and freelance reviews are typically written based on time spent with a retail review copy or review key for the game that is provided by its publisher.