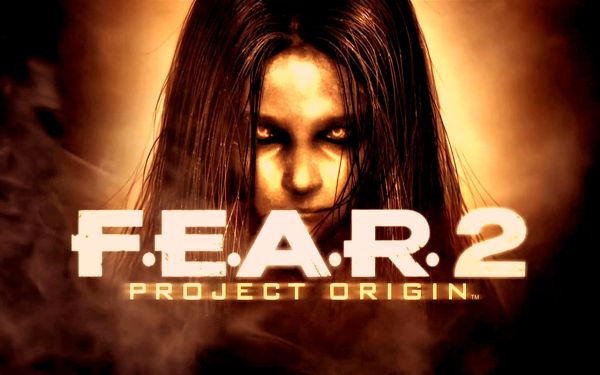 There were moments when playing FEAR 2: Project Origin that I forgot that I wasn't enjoying the experience much. Now and then I'd traipse into the cold, forbidding outdoors, a gloom hanging overhead, and I'd hear the familiar WA-CHUNK of a nearby mech. Never mind that this was the umpteenth tiresome encounter against a mechanized menace... I actually felt for once that I was in a suitably bleak and horrific environment. Other occasions would crop up and remind me that I was supposed to be terrified, especially during the stretches in which I'd charge past burnt out husks of human remains--charred by a thermonuclear explosion--or ready my arms to engage screaming phantasms. Sure, they seemed imposing, but all it took to fell them was a few well placed shots, delivered from my fear-rattled hand.

Unfortunately, that's just another day at the office in FEAR 2. You engage a foe, it runs a familiar routine, you gun it down, and you move on. There isn't much in the way of variety or challenge, except that you occasionally gun down terrorists and/or supernatural creatures in open areas instead of hallways. Worse, the game doesn't feature the terrific AI that its predecessor did. Foes fall for all manner of stupid tricks, tend to be lax on the draw, and apparently love to run towards grenades. Once you've figured out their patterns, a combination of your bullet time capability combined with some slight aiming skill, and maybe a pistol whip here and there, should take care of most of your concerns. 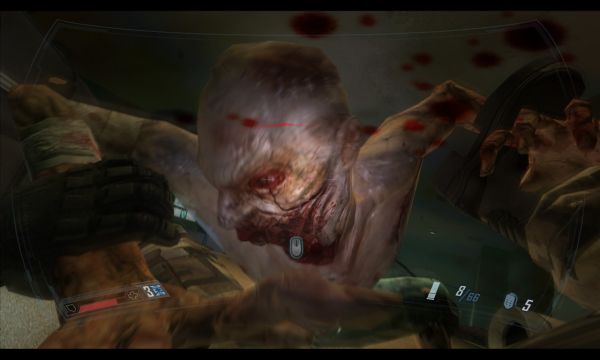 Now and then you run afoul of demonic forces, positioned in the hopes of setting your knees to knocking. However, as you raise you gun to the gore-smeared legions, you can't help but feel apathetic. There are less cerebral scare tactics at work in this sequel and more visceral mayhem in its place. That would work perfectly in a frenetic shooter where you're constantly bombarded by hordes of nightmarish marauders, but FEAR 2 isn't that kind of game. It tries to be an effective cover-based shooter, but only manages to be passable. It attempts to scare the daylights out of you with unnerving critters and the occasional display of splattery, but it feels more like a formality than a genuine attempt at horror. At one point the antagonist Alma attacks a couple of your foes and pops them like balloons. The game even plays up the suspense factor during this scene with tense music, but you can't help but feel disconnected from the event. Why would anyone care about the fate of random goons that they would have gunned down anyway? It's as if the developers thought that the graphic display would be enough to frighten you, but it only serves to hamper the integrity of the game's horror elements and demean Alma as a villainess.

Unfortunately, evens like those depicted above are a product of one of horror's greatest nemeses: explanation, particularly as it relates to the origins of the antagonist. By this point in the series, players should already know all about Alma's backstory, and she's no longer a dreaded mystery like something out of a Lovecraft or Blackwood piece. She's become like another Samara/Sadako, Freddy Kruger, or even Toby from the "Paranormal Activity" movies. Now that we know her modus operandi and her reason for being, she's gone from an unpredictable and fearsome force to merely being another mundane, kill-by-numbers kind of villain. If you've ever read stories like Stephen King's "The Moving Finger" and wondered why the author never explained the antagonist's origin, that would be why. Ignorance can be more terrifying than knowledge. 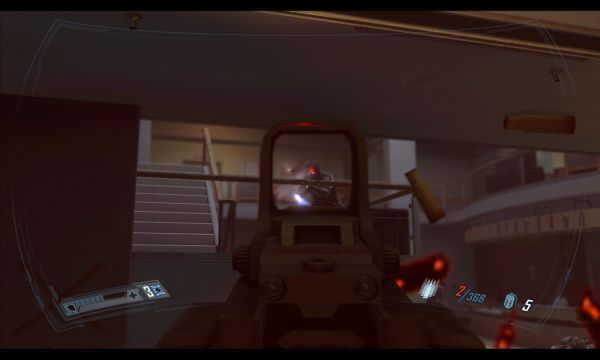 I'm not saying that FEAR 2 is a terrible game, though. The developer did an excellent job of updating the visuals, fleshing out locales with dire details and nasty textures. Character models have a more realistic look to them, and animations aren't as stiff as in previous entries to the series. On top of that, the game moves fluidly. Aiming, leaping, running circles around your prey... It all runs like a well-oiled machine.

The game even sometimes makes the most of its magnificent engine by thrusting you into some rail shooter sequences that put you in control of a mech. You just haven't lived until you've unloaded myriad rounds into a clone, who then bursts into gory confetti before your eyes. You might wonder: is engaging in such gruesome activities as cathartic as it was in the olden days? Yes!

As I've mentioned, FEAR 2 only commits to its more frantic aspects once in a while. The game would have been better off with either improved enemy AI or a full commitment to Doom-like slaughter. Unfortunately, going the cover route only resulted in a gorgeous and smooth, yet ultimately vapid experience. The game's overall setup is in no way unique, and can be found in a laundry list of other titles that utilized FEAR 2's concepts with superior results. 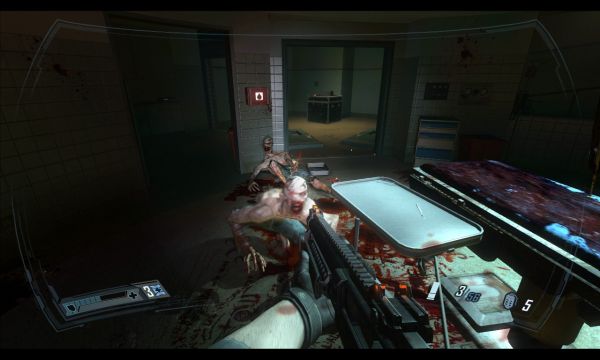 Initially, I planned to review this game for 2014's Halloween offerings, and then download its expansion pack, FEAR 2: Reborn and add that to my list of rants and ravings. Unfortunately, FEAR 2: Project Origin left me so underwhelmed that I've completely given up on the franchise. Frankly, I'm tired of donating hours to a mostly forgettable series of shooters whose attempts at genuine scares tend to fall flat. It would be one thing if every fire fight in FEAR 2 didn't bear all the markings of a copy and paste effort or if the game had featured deeply, psychologically scarring material. Sadly, I ended the campaign feeling like I'd blasted through two genre exercises simultaneously.
2.5/5

If you enjoyed this F.E.A.R. 2: Project Origin review, you're encouraged to discuss it with the author and with other members of the site's community. If you don't already have an HonestGamers account, you can sign up for one in a snap. Thank you for reading!

© 1998-2020 HonestGamers
None of the material contained within this site may be reproduced in any conceivable fashion without permission from the author(s) of said material. This site is not sponsored or endorsed by Nintendo, Sega, Sony, Microsoft, or any other such party. F.E.A.R. 2: Project Origin is a registered trademark of its copyright holder. This site makes no claim to F.E.A.R. 2: Project Origin, its characters, screenshots, artwork, music, or any intellectual property contained within. Opinions expressed on this site do not necessarily represent the opinion of site staff or sponsors. Staff and freelance reviews are typically written based on time spent with a retail review copy or review key for the game that is provided by its publisher.