After years in the making, No Man's Sky is finally here. It has received mixed reactions from critics and players alike for some very good reasons, failing to live up to many of its development promises. However, as a person who did not follow the game's hype very closely, I can only judge the game at face value and decide whether it is fun based solely on my own experiences with it.

First, I will explain what this game is about, in case you've been living under a rock or haven't read any other reviews for it. No Man's Sky is a procedurally-generated survival and exploration game with a sleek 1970s sci-fi aesthetic. As a nondescript spaceman, you will travel between worlds in your own starship, collect mineral resources, visit starbases, parlay with aliens, trade, upgrade your exosuit and weapon, and eventually make enough money to trade in your well-worn ship for a new one.

There is also a story thread involving a mysterious alien database known as "Atlas" who is, for some reason, trying to draw you toward the center of the galaxy. That is a supremely long haul though, so naturally you will get sidetracked along the way in search of resources and fuel to make the trip, if you decide to take it at all. 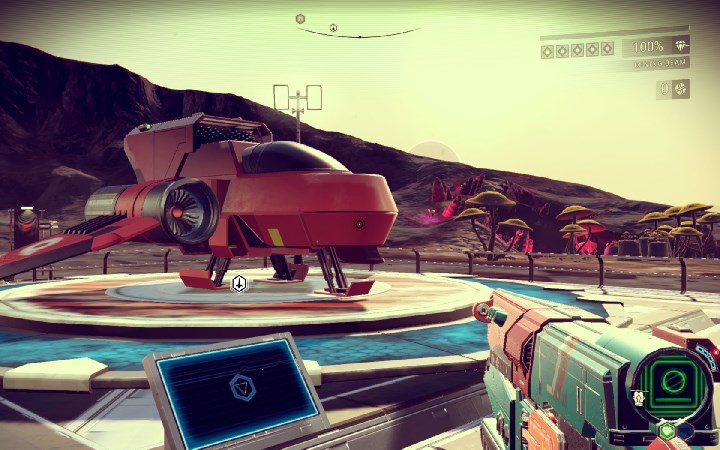 But there really isn't a reason not to, as there's very little else to do in this sprawling galaxy. I should be clear, though. There is lots of stuff out there - The game boasts over 18 quintillion procedurally-generated planets to explore, and they are packed with about as many procedurally-generated species of flora and fauna, along with resource deposits, ruins, abandoned bases, and crashed ships. Some of the presentation of this stuff is very clever. The creatures, for example, are cobbled together from various prefabricated bits and pieces. On one planet you might find hostile lizardy-type creatures with raccoon heads, and on another you might find skittish mossy creatures with tentacles. They all exhibit different behaviours. This is very cool, and No Man's Sky earns high marks for technical achievement in this respect.

The problem is that this variety doesn't necessarily translate into interactivity. The animals generally fall into two categories: Hostile attackers or docile prey. If they are hostile, they will attack you, and naturally you will need to shoot them until they're dead. If they are docile, you can feed them snacks to make them friendly, then they might helpfully sniff out resource deposits for you. This pretty sums up the entirety of your interaction with them, and this is true across all species, across all planets. Similarly, the various forms of plants and fungi are only meaningfully interacted with in two ways: Shoot them to break them down into raw materials, or scan them and upload their data to Atlas in order to earn a cash bonus. That's it.

These limitations might not be a problem if the other core mechanics of No Man's Sky were groundbreaking in some way, but they simply aren't. The first-person shooting aspect of the game is very bland and lackluster; all that's involved is pointing your weapon at the enemies and shooting at them. There is no way to dodge, no way to use cover, and there are no combat items or skills. If you have enough health and ammo to survive a battle you will probably win; if not, you'll have to turn tail and run back to your ship. The AI is none too intelligent and will probably let you get away. 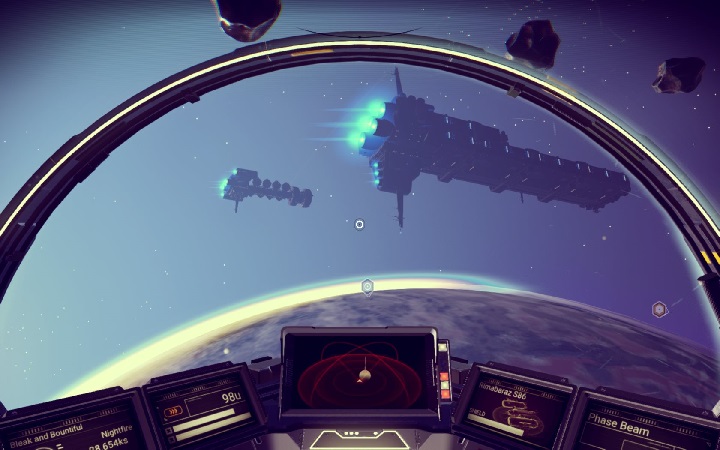 The space combat is equally lackluster. It is functional, but again, like the ground battles, there is absolutely nothing here that hasn't already been done better in other games. Most of the battles boil down to whether or not your ship has enough health and ammo to survive any given encounter. As long as you aren't severely outnumbered you will assuredly win, because the game's auto-aim feature is so generous that it's almost impossible to miss with your weapons. However, if you do happen to find yourself outnumbered, simply punch your engines and escape. Much like the feral animals upon the surfaces of the planets, the starship pilots in No Man's Sky are lacking in intelligence and will probably let you get away without too much hassle.

This mediocre presentation is made worse by a marked lack of variety of stuff to install into your ship. There are exactly two types of ship weapons: Lasers and pulse cannons. They can be upgraded, but their functionality remains more or less the same. This is a bit of a letdown. Even Wing Commander, released back in freaking 1990, had missiles, ECMs, and other things to spice up the variety, but this game elects to do away with all of that. It is a puzzling step backward for the genre. I can only hope that more variety is added in patches, because right now the space combat feels extremely bare-boned.

I could forgive all of this if No Man's Sky had some worthwhile storytelling to sink my teeth into, but the writing is so opaque and pretentious that it's impossible to become engaged with any of it. For example, upon exploring a ruin and activating an ancient thingamajig, I am given a wall of text that reads:


The Atlas interfaces drift alone in the endless void.
They are silent. They are unknowable fragments of an ancient whole.
Yet their imprint on time and space molds our existence.
They are the equation, and life is its answer. 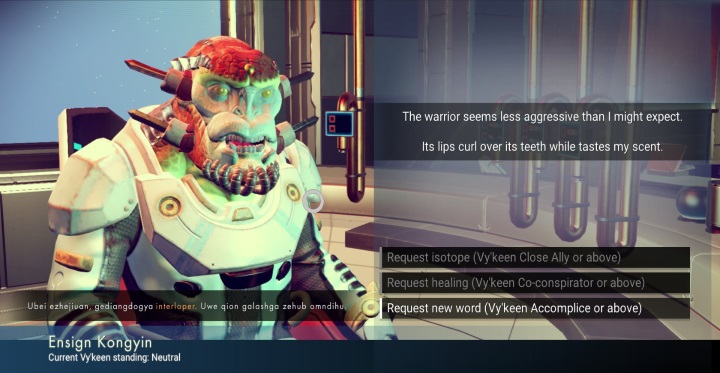 Again, I should be clear. There are other characters - perhaps billions of them - intelligent aliens who are procedurally generated just like everything else, but they are very scarce. After ten hours of play I encountered maybe five of them, tops, and for some reason they never, ever appear in groups. Even if you dock at a gigantic space station, all you meet is one guy sitting at a desk. There are no cities and no robust societies of any kind. The entire galaxy seems to be filled with lonely, singular travelers who aren't very chatty and are mostly interested in trading. They do not give you any quests or contracts, you cannot hire them as mercenaries, and they do not impart much in the way of interesting lore. Indeed, there are very few ways to form any sort of meaningful relationships with the denizens of this galaxy at all. No Man's Sky is an incredibly lonely experience.

This might be acceptable if the developers' vague promises of multiplayer had been fulfilled. Other players could easily fill that void, but unfortunately all other players are invisible to you, even if you are on the same planet at the exact same time that they are. Thus, the multiplayer functionality in this game is limited only to the persistence of names that you have given to your discoveries. For example, if you are the first person to discover a beacon with a pile of crates next to it, you could rename it to "J. Lo's Jiggly Booty", and anybody else who happens to come across that particular pile of crates would see how clever you are. But you'll probably never meet those people or have any contact with them whatsoever. Sounds fun, right? Right?

Maybe for some, but not for me. In this respect, No Man's Sky feels like a step backward as a sandbox/survival game as well. Half the fun of games like Starbound is the ability to play with your friends, make a base, create meaningful structures of your own, and establish your own story within the game world, but No Man's Sky does not allow for this. It is not possible to establish a home for yourself of any kind, even if you find a beautiful planet that you'd like to establish roots on. Your only home is your starship, and you are merely a tourist in this vast, lonely universe, drifting endlessly in search of enough resources to keep yourself alive and little else. To be fair, the developers say that base-building is coming in an update, but it cannot come fast enough. 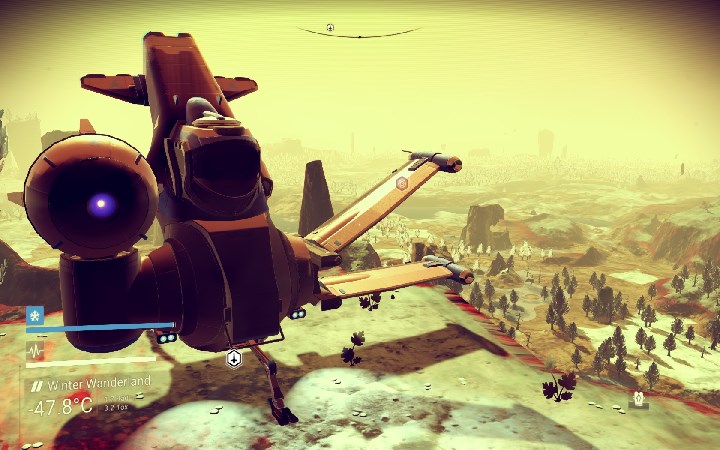 With all that said, No Man's Sky does some things right. The mining, crafting, and space flight feel good and well-polished. The combat, as aforementioned, is adequate even if it isn't groundbreaking in any way. The soundtrack by 65daysofstatic is well composed. Most importantly though, the visuals and atmosphere are incredible, and are impressive enough to keep an aesthete like me interested in playing, at least for now. Some of the planets are jaw-droppingly beautiful. I have been forced, at times, to simply put down my mining laser and stop and stare. I can't help but respect the fact that No Man's Sky is an incredibly sophisticated piece of code, even if it only does a few things extremely well.

Unfortunately, that may not be enough for many players. No Man's Sky feels, at best, like a highly polished indie title, or at worst it feels outright unfinished. I concede that there was no way it could have possibly lived up to the level of hype it generated (nor would I expect it to), but it is so far off the mark that I can understand why people felt cheated. In its present state it is simply not worth the asking price of $60.

The good news is that the developers have announced free DLC expansions going forward, and they have already patched many of its technical issues and bugs. If they apply the same level of dedication to adding content, perhaps No Man's Sky will become the amazing game that it is meant to be. I really hope they do. There is a solid foundation here with tremendous potential. For now, though, I'd recommend waiting a while before picking this title up, or wait for a sale.
3/5

If you enjoyed this No Man's Sky review, you're encouraged to discuss it with the author and with other members of the site's community. If you don't already have an HonestGamers account, you can sign up for one in a snap. Thank you for reading!

© 1998-2020 HonestGamers
None of the material contained within this site may be reproduced in any conceivable fashion without permission from the author(s) of said material. This site is not sponsored or endorsed by Nintendo, Sega, Sony, Microsoft, or any other such party. No Man's Sky is a registered trademark of its copyright holder. This site makes no claim to No Man's Sky, its characters, screenshots, artwork, music, or any intellectual property contained within. Opinions expressed on this site do not necessarily represent the opinion of site staff or sponsors. Staff and freelance reviews are typically written based on time spent with a retail review copy or review key for the game that is provided by its publisher.