Anarchy versus tyranny. Dystopian themes. Emotionless android killers capable of taking down an entire nation. For a side-scrolling beat 'em up on Nintendo's 16-bit console, 1994's Ninja Warriors has a bleak premise, a far cry from the usual family-friendly image Nintendo was aiming for throughout the 1990s. Never heard of the game? Well, NatsumeAtari has brought the title back from obscurity, deeming it worthy for a PlayStation 4 and Nintendo Switch release under the new name of The Ninja Saviors; finally, a new generation will be exposed to the classic tale of... of a robotic ninja squad fighting a goblin demon leader in a three-piece suit.

Before that destined confrontation, your immortal murder machines will have to press through eight stages against the demon's army. Along with having to battle soldiers equipped with knives, rifles, and grenades are assorted oddities, such as oni-masked ninjas, flexible hunchback creatures with claw weapons, and kung fu fighters in business attire. After choosing one of five ninjas, you'll engage using numerous techniques, like swinging an arm sickle from a robot with an exposed exoskeleton, hitting several foes with a lethal chain flail as a bulky, towering ninja, or just simply dropping opponents with kunai swipes as a blonde, pony-tailed assassin. Manage to survive long enough without sustaining heavy damage, and you'll also be rewarded with a screen-wide bomb strike for your cautious play style. 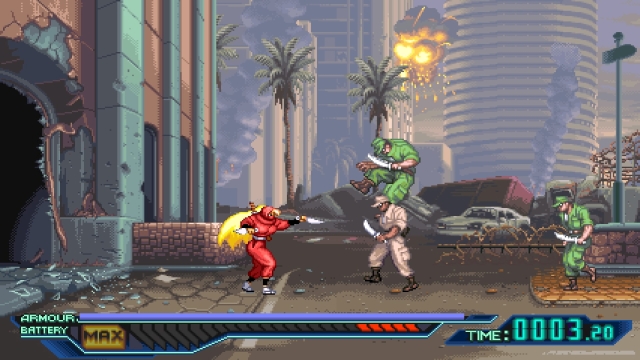 This bloodshed is scattered across a variety of environments, from ruined city blocks and a shopping mall, to a fortified skyscraper and a snowy mountain facility. Now, if you briefly compare screenshots of these locations between the SNES and PS4 versions, thinking they don't look all too different, then... you might need to see an eye doctor. The settings are the same, sure, but the devs have actually gone out of their way to redo most, if not all, of the visuals to accommodate the widescreen ratio and HD presentation. What's really impressive is that the updated graphics still maintains the "limited" 16-bit aesthetic; if you never played the original, you might genuinely believe these are visuals from the 1994 title. Seeing everything in motion is a whole other thing, too. Characters now have extra layers to their animations, giving the game a silky smooth look when the action gets going.

Speaking of new stuff, there's quite a bit of material in this revision, such as extra attacks, new enemies that include flying drones, reinsertion of enemy kunoichi removed from the original English releases, and makeovers of certain foes, like the first stage boss being changed from "tall guy" to an actual colossus. Sadly, content that actually influences gameplay is often a miss, specifically the presence of more enemies on screen. It's fine when normal, one-hit death soldiers crowd, but it becomes needlessly rough when stronger, distinctive opponents start ganging up; worse when they're speedy. 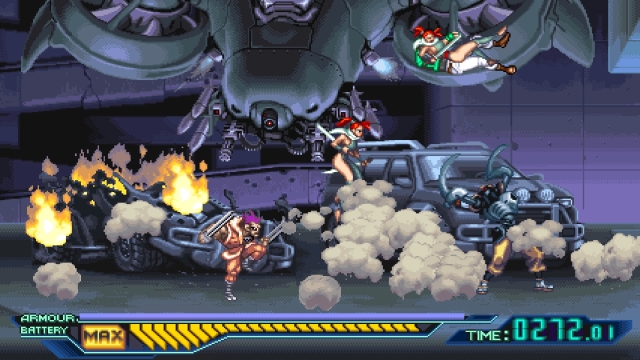 As a given, the agile characters in your squad have a better chance here, with the slower and clunky ones having a harder go. This isn't anything new in video games, serving as its own difficulty scale and inviting potential variety to combat. However, it shouldn't get to the point where defeating a horde of tough, quick opponents without sustaining heavy damage is more a stroke of luck than skill in the mid-to-late stages... What doesn't really help is the fact that this isn't a typical beat 'em up where you can navigate a quasi-3D plane; you're stuck on a single, flat surface. Unsurprisingly, this makes any form of counter feel flimsy, especially against aggressive bosses who constantly block or evade your attacks en masse.

In spite of these changes, along with their varying levels of quality, the main portion, the action, has remained intact from the SNES title. That's not necessarily grounds for celebration. Here's the thing about the original 1994 version: it's a very basic beat 'em up. It's so basic in terms of its game design--slashing enemies nonstop--that it succumbs to repetition in the very first stage. Normal enemies are downed with a single attack, and on top of that, you can easily walk into them to activate your throw move, thus downing multiple enemies in a row by launching one into others. This... is what you'll be doing for most of the game. The flow slightly changes halfway through as specialized opponents make frequent appearances, but shortly after, the game gives up on adding variation and again succumbs to repetition all the way to the credits.

While The Ninja Saviors is the definitive way to play 1994's Ninja Warriors, it only slightly edges out the original. The game is visually crisp, looks good in widescreen, and the inclusion of two new playable characters is nice, even if they're gimmicks. The addition of two-player co-op might've been a neat touch, too, but forcing both players to share a health bar is absolutely ridiculous, particularly since you can't respawn on the spot after dying. However, the most glaring issue is still the handling of crowds, as it detracts from the action. Mix that with the already generic, uninspiring combat design, and you have a muddled, average experience similar to its SNES incarnation. Unfortunately, there's no way this could have been avoided, either, unless the devs went the extra step of making an entirely brand new sequel to overcome said problems.

If you enjoyed this The Ninja Saviors: Return of the Warriors review, you're encouraged to discuss it with the author and with other members of the site's community. If you don't already have an HonestGamers account, you can sign up for one in a snap. Thank you for reading!

© 1998-2020 HonestGamers
None of the material contained within this site may be reproduced in any conceivable fashion without permission from the author(s) of said material. This site is not sponsored or endorsed by Nintendo, Sega, Sony, Microsoft, or any other such party. The Ninja Saviors: Return of the Warriors is a registered trademark of its copyright holder. This site makes no claim to The Ninja Saviors: Return of the Warriors, its characters, screenshots, artwork, music, or any intellectual property contained within. Opinions expressed on this site do not necessarily represent the opinion of site staff or sponsors. Staff and freelance reviews are typically written based on time spent with a retail review copy or review key for the game that is provided by its publisher.