"Are you a bad enough dude to save President Ronnie?"

At long last, my answer to that question is a resounding "Yes!" I always suspected I was a bad dude, sufficient for most any task you might name. But now I know for a certainty that I can save the president, if ever a time comes when he is kidnapped by dragon ninja. At least, I can if I have unlimited continues.

Johnny Turbo's Arcade: Bad Dudes vs. Dragonninja is, as you must suspect, a Switch port of the arcade classic of the same name (minus the whole "Johnny Turbo's Arcade" bit, which doesn't make any sense but anchors a whole series of ports of Data East classics presently offered on Nintendo Switch). The original game was quite popular when I was a youngster, on the NES and in arcade cabinet form at local convenience stores. I even played the latter once, when I had a few quarters to spare. I didn't get far, so I welcomed the chance years later to finally see that old adventure through to its conclusion.

As the story goes, ninja-related crimes are on the rise and even the White House can't stop it. President Ronnie, who looks a whole lot like Ronald Reagan, has been kidnapped. It is your job to save him, either alone or with a friend. This you will do by battling through a whole slew of ninja warriors who mostly look the same, with the exception of bosses you battle first at the end of each stage and then as part of a gauntlet before you can face the leader of the entire evil clan. 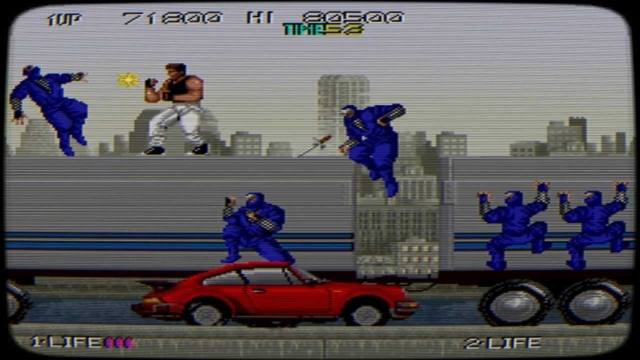 Brawlers aren't all that popular in arcades these days. Arcades aren't even that popular, for that matter. But there was a time when things were different, and Bad Dudes is a product of that time. Playing it today is a bit underwhelming, and I recognize the experience must have limited or no appeal to people who aren't already a bit in love with the genre and the nostalgia. But if you do have the nostalgia--as I do--you're in for an okay time.

I say "okay" because unlike Double Dragon and other such titles, Bad Dudes limits your movement significantly. You don't have to worry about depth of field. Instead of moving toward the back of the screen or toward its front, you really can just walk, jump, punch and kick on two levels: the top and bottom halves of the screen. Sometimes, you can't really even do that, because you're riding on top of a fleet of trucks or a train and jumping down just means you break your ankle and drop off the screen.

The more limited options for movement do make for a simpler game, and that means that in some respects Bad Dudes is pretty easy. I tend to have an easy time playing through the individual stages without taking a whole lot of damage, since most ninja fall after sustaining a single hit. You also have a reasonably generous life meter, and you can refill it by stopping to grab cans of soda that drop (or whatever they're supposed to be). There also are weapons, such as a dagger, which make things easier still if you need the help. 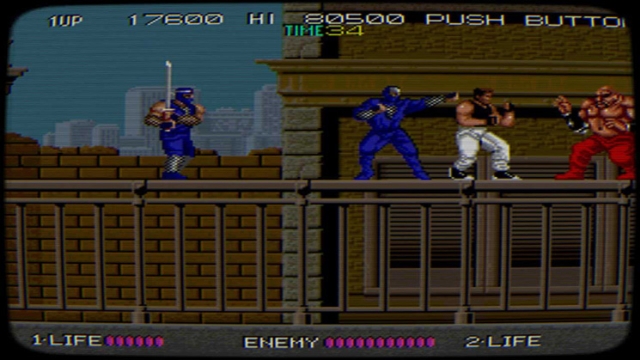 Boss encounters are considerably more difficult than the gauntlets leading up to them, however. At the end of the first stage, there's a guy--Karnov, a character Data East's developers seem to have liked a lot--who breathes fire and slowly walks or jumps toward you and clumsily punches. He's easy enough to tend to with quick jump kicks, followed by hasty retreats, then more jump kicks until he collapses in a heap. At the end of the second stage, while climbing around the cab of a truck, you will fight a guy with iron claws on his fists. He's a bit harder, but still manageable. After that, though, things start to get a little silly. Life meters steadily grow longer, and enemies get more creative with their attacks, so that you can hardly help but take damage until you've really mastered the game. I see their unforgiving nature as a symptom of the old game design philosophy that said "Wow, we really need to get more coins from players so stores and arcades will stock our games and we can stay in business." That didn't work out in the end, but you can see where the developers were going with that idea.

The Switch port of the game is pretty decent, though, I must say. It doesn't seem to introduce problems that didn't originate in the original arcade game, and fixing those problems would probably have diminished my desire to even play. So there's still a ridiculous script, as there should be, complete with awkward grammar and silly dialogue. The beefcake heroes look absurd, but they felt like parody even back in the day. 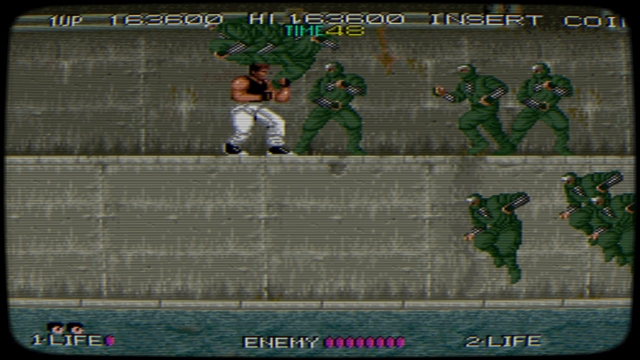 The port also improves some things. There are no new difficulty settings I could find, but you're able to press a button any time you wish to add a credit, so that you're essentially on freeplay. If you want to challenge yourself, just refuse to add more credits. You also can adjust the screen size so it fills a typical HDTV or so it reflects what I believe was the original aspect ratio used on old cabinets. Then there are filters, allowing you to modify to include scanlines, a composite view, RGB, S-Video and even blurry VHS. These are all nice touches, but unless you're super in love with the old school look and want to replicate it, the default setting is probably most attractive and enjoyable.

At the end of the day, you are either the sort of player who gets behind the notion of using your bulging biceps and jump kicks to save a fictional president... or you're not. If you fondly look back on the arcade glory days, you can download Johnny Turbo's Arcade: Bad Dudes vs. Dragonninja for probably not a whole lot more money than it would cost you if you were standing at an old arcade cabinet, feeding it quarters. And then you can play through again and again, or with a friend, in your apartment or on the go. It's hard to complain about that!
3.5/5

If you enjoyed this Johnny Turbo's Arcade: Bad Dudes review, you're encouraged to discuss it with the author and with other members of the site's community. If you don't already have an HonestGamers account, you can sign up for one in a snap. Thank you for reading!

© 1998-2020 HonestGamers
None of the material contained within this site may be reproduced in any conceivable fashion without permission from the author(s) of said material. This site is not sponsored or endorsed by Nintendo, Sega, Sony, Microsoft, or any other such party. Johnny Turbo's Arcade: Bad Dudes is a registered trademark of its copyright holder. This site makes no claim to Johnny Turbo's Arcade: Bad Dudes, its characters, screenshots, artwork, music, or any intellectual property contained within. Opinions expressed on this site do not necessarily represent the opinion of site staff or sponsors. Staff and freelance reviews are typically written based on time spent with a retail review copy or review key for the game that is provided by its publisher.