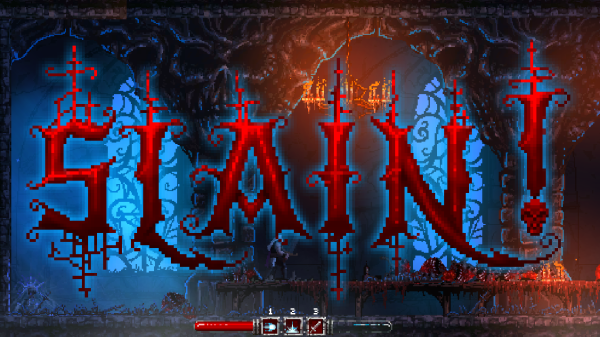 Slain! progresses the way any metal-inspired video game should. It begins as you awaken from what was supposed to be an eternal slumber. You exit your tomb to find a fire-strewn land, a bloody-violet skyline and hordes of wandering undead creatures. Undaunted by the horrific imagery, you dice up all opposing demons and bathe in their warm blood and bone fragments. As you advance, the environs grow even grimmer and more nightmarish. Your journey takes your through septic tunnels, dilapidated fortresses covered with crumbling grotesques, hellish forests populated by dying trees, and rancid dungeons dripping with hemoglobin.

Fierce riffs accompany your every step. A slow, brooding monster of a tune takes you through the initial stage, eventually leading into a more upbeat piece with an ominous synthesizer complimenting the guitar work. My favorite was a speedy arrangement that played in the closing segments of the aforementioned dying forest, where you race for your life.

It wasn't just the beastly BGM that made that scene standout, though. As you approach the scenario, a witch transforms you into a mighty matted werewolf the size of a buffalo. She then instructs you to charge through a gauntlet of traps, impediments and monsters whilst trying to outrun/impress a massive spectral wolf and his ghostly pack. With bursting dashes, you plow through multiple contingents of monsters, leaving a scarlet mist in your wake.

In short, Slain! is certifiably metal. Sadly, it's an otherwise disappointing experience... 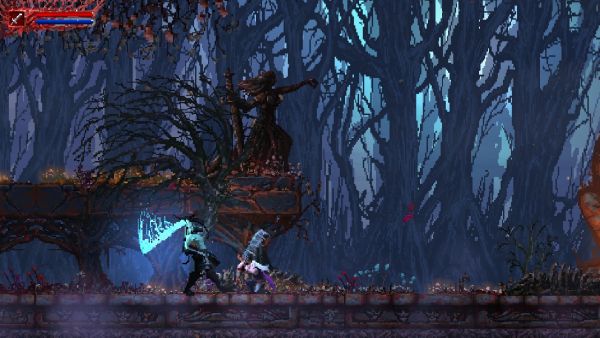 As you chop your way through world one, bloody dialog boxes provide you with play instructions. They fill in vital info, such as the revelation that you can restore mana via decapitation and use "spirit bombs" for crowd control. However, the tutorial segments don't bother to outline key bindings. Players using an Xbox 360 controller shouldn't have much trouble uncovering each button's role in massacring evil. Unfortunately, keyboard users will have their work cut out for them, especially considering that the spirit bomb mentioned above requires holding a certain key while ducking. That's not exactly an intuitive combination of keys...

Once you've acclimated yourself to Slain!'s mechanics, you might notice that something is amiss. Although your sword rends flesh, there isn't a detectable sound effect to accompany the action. Obviously, checking the options menu would be in order at that point. There you'll discover that both music and "SFX" volumes cranked to ten. It turns out the game's soundtrack is so overwhelming that it drowns out the sound effects. Unfortunately, quieting the music doesn't fix the issue because reducing the volume by even a single point drastically hushes the score. By the time you reach "6," the tunes are nearly silent. Instead of a satisfying middle ground, you'll have to settle on a configuration that doesn't involve straining to hear either facet of the game's sound design. 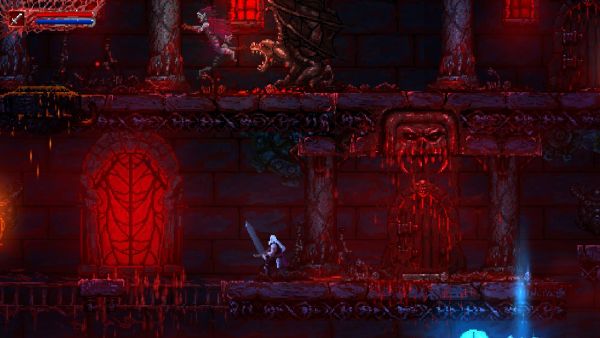 Tricky yet simple combat awaits those who are able to ignore the above flaws. The battlefields hold copious skeletons, witches, hellhounds and slimes just itching for a scrap. Careful swipes and well-timed combos can annihilate most of Slain!'s weaker goons. Of course, despite your efforts, you'll still suffer a few slashes while dishing out blows. For the first few levels, Slain! gives a piddly blade that's mostly incapable of marring opposition without leaving you susceptible to reprisals. If you're lucky, though, your strikes will cancel enemy animation cycles, thereby forcing them to restart their offensive bids. Thankfully, you do gain a couple of additional weapons as things progress.

You also encounter a plethora of meaty demons throughout the adventure who demand the utmost effort to destroy. When you attempt to scotch most of these guys the "proper" way, they typically break your attack combo with a crushing slam that lops off a fair portion of your hit points. You could try back stepping, although that doesn't always put enough distance between you and your would-be killer. During desperate times, it's tempting to whip out your trusty (and highly exploitable) ice axe and commence with a flurry of slashes while crouching. Remember what I said earlier about interrupting animation cycles? That also applies to larger foes, except that spamming the ice axe while ducking often prevents them from doing much more than arriving and perishing.

Believe me, the crouch-chop technique gets tiresome quickly because there are gobs of these beasts throughout the campaign. The alternative to the cheap method described above is to engage in clunky, unbalanced battles that you mostly win via button mashing anyway, less a significant chunk of hit points. No matter which procedure you choose, Slain!'s confrontations are tedious. It just so happens that the cheaper and less entertaining choice is also more effective--and it shouldn't be. 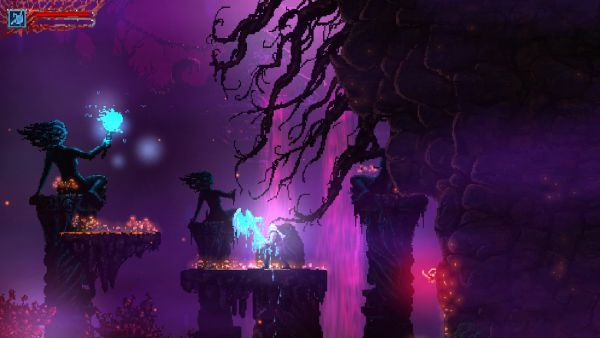 Don't get me wrong; I'm not saying Slain! is easy. It'll crush you if you're not careful. Each altercation comes down to you figuring out how to isolate a tougher target, and when to use or conserve magic. The real issue here is that Slain! is repetitive, since almost every dire situation is cleared after a little button mashing or the timely use of a spirit bomb.

I couldn't escape the notion that the developers could have provided the hero with a handful of additional offensive maneuvers. The battle system seems unfinished and in dire need of tweaking. As I advanced through Slain!, I realized that the same could just as easily be said about the game's other aspects. For one thing, there isn't much of a story. You're a dead warrior who teams with a witch and a wolf spirit to stomp evil. There isn't any elaboration beyond that, even though the mysterious prelude begs for backstory regarding the protagonist.

There are only five loosely connected regions to explore (only three or four of which are required), and few of them attempt to further any sort of plot. Even as the quest draws to a close, it doesn't offer enough narrative. When you reach the grand finale, you witness an epic cutscene that seems to set up a legendary final boss bout and a memorable conclusion that never materialize. Instead, the game ends in a cliffhanger while the closing theme plays. The word "CREDITS" appears on the screen then vanishes. No actual credits follow it. That alone should scream "unfinished."

Slain! feels incomplete. It most closely resembles an action title you might find stuck in Steam's "Early Access," not a proper final build. Part of me hopes that further development is on the way, because I'd love to see Slain! mature with a generous helping of additional content and some fine tuning. Until then, though, I can't say I recommend it.
2/5

If you enjoyed this Slain! review, you're encouraged to discuss it with the author and with other members of the site's community. If you don't already have an HonestGamers account, you can sign up for one in a snap. Thank you for reading!

© 1998-2020 HonestGamers
None of the material contained within this site may be reproduced in any conceivable fashion without permission from the author(s) of said material. This site is not sponsored or endorsed by Nintendo, Sega, Sony, Microsoft, or any other such party. Slain! is a registered trademark of its copyright holder. This site makes no claim to Slain!, its characters, screenshots, artwork, music, or any intellectual property contained within. Opinions expressed on this site do not necessarily represent the opinion of site staff or sponsors. Staff and freelance reviews are typically written based on time spent with a retail review copy or review key for the game that is provided by its publisher.