During the brief period I spent playing Bloody Good Time, I had but a single wonderful experience. I logged on one night and performed my routine, and usually futile, check of the servers for other players. Unlike every other such occasion before and after, I spied a multitude of users on a single server. I didn't dally at that point, but joined in and commenced shooting, bludgeoning, and electrocuting actual people. It was refreshing for once to face off against rivals with intellect rather than the game's intelligence-free bots. I thumped my chest in primal pride every time I bumped off a virtual playmate, and even hooted with appreciation when one of them felled me. It was a fabulous night for taking lives and for repeatedly dying.

Unfortunately, this was the one and only time that I was able to truly enjoy Bloody Good Time. Every other session consisted of logging on, finding nary a soul on the servers, and challenging computer controlled imbeciles instead of live individuals. 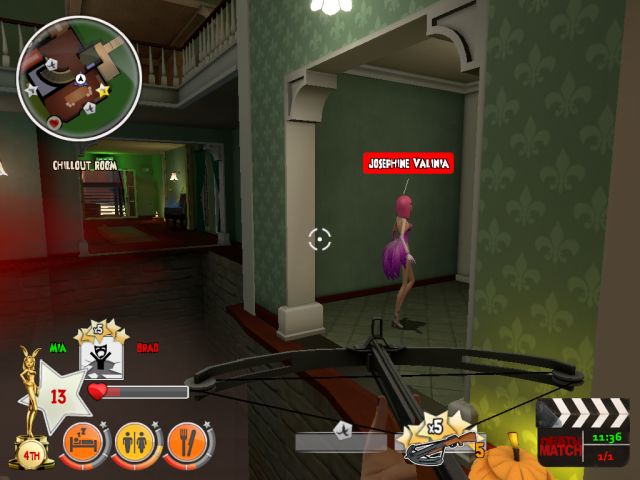 At first, playing with bots seemed serviceable enough. I genuinely liked trying out Bloody's various modes, exploring the game's different maps, and honing and improving my skills via single player matches. I even savored the game's fresh twist on deathmatch rules, which rewards you for scoring kills with pieces of arsenal that haven't received much love. For instance, if someone hasn't murdered a player with a katana recently, then that weapon may bestow a decent-to-good amount of points per kill. After it's been used to off a few suckas, it drops in value and other weapons cycle upward in its place.

Even when certain weapons were not in the highest standing, they were still entertaining to slay my opponents with. For instance, I always got a rush out of tossing a molotov cocktail at a passing idiot, especially when she ran into other idiots and set them ablaze as well. Sometimes I preferred to blow my victims to bits from afar, and thus unleashed explosive, remote controlled rats to neutralize them. At times when I preferred a more hands-on massacre, I snatched up a fire axe or a classic kitchen knife for some old fashion slicing. 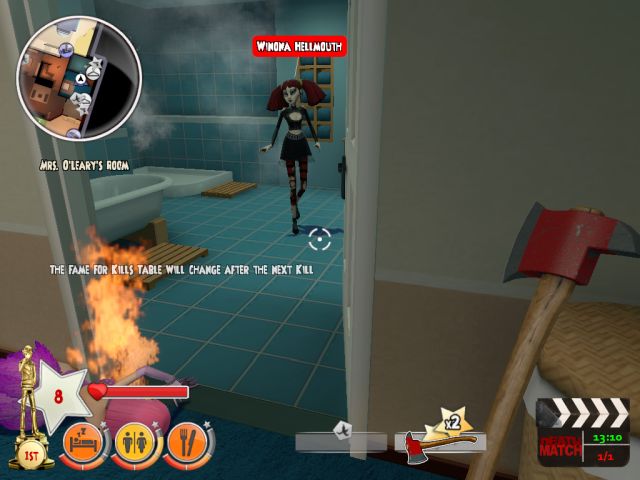 Of course, the game didn't permit me to engage in unbridled slaughter. For instance, since I was butchering other combatants on a movie set and not on a rubble-strewn battlefield, there were security guards patrolling the premises. If one should happen to catch me with a weapon drawn or assaulting someone, then they busted out the tasers and confiscated one of my toys. Also bear in mind that guards weren't the only wrench in the killing cogs. As it turned out, characters had to eat, sleep and void their bowels, lest they suffer nasty status afflictions like slow movement. Stopping to perform any of these tasks also left them susceptible to an instant kill. While this added a little depth, it was also quite irksome. Sometimes there's nothing more annoying than wanting to chop till you drop only to be slowed by a full bladder. On the other hand, this feature also provided me with a slight advantage, as I frequently caught bots taking a dump or chowing on a hamburger. It's thanks to this that I found one of the greatest simple joys in life: plugging few revolver shots into a crapping clown's skull.

More than anything listed above, I dug the game's many environmental traps. One of my favorites involved trapping my opponents in den that filled with gas. Most of the time, they didn't catch on to what was happening and continued to pick at each other. They became aware, though, when a spark ignited the gas, instantly immolating them and graciously boosting my score. My love wasn't limited to this one device, though. I also enjoyed activating a giant press positioned above a beach house's rear entrance, which flattened unsuspecting competition. I even cackled as I electrocuted foes with faulty slot machines, sent them plummeting into the darkness of a bottomless pit, and impaled them in a spike-riddled hallway. It's just unfortunate that I was only able to try these out on live players once.

My experiences, as listed above, could have been much grander. Though I was entertained for a couple days with Bloody, I found my interest waning thanks to two missing ingredients that are key to an effective deathmatch game: plenty of maps and plenty of users. 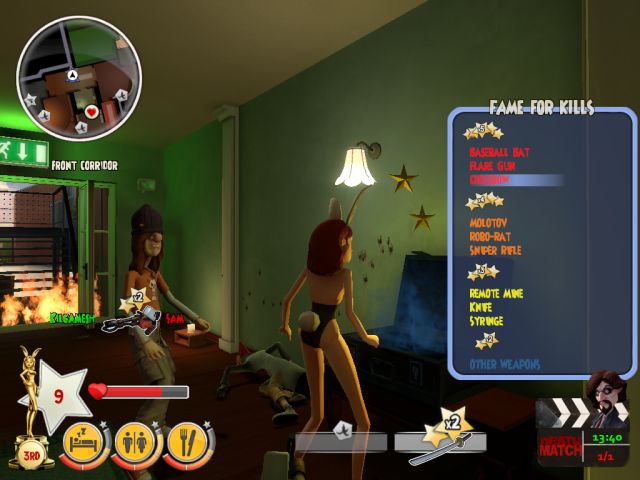 Bloody features only three maps: a beach house, a haunted party palace, and a casino. For me, though, there may as well have been only two. The beach house, though complex, was designed in such a way that I had a tough time finding players. Because of that, I spent sizable chunks of time wandering and losing interest. Thankfully, I had the other two to tinker with, but repeatedly playing even those locales caused the experience to grow stale. I would say that the developers should have included more maps, but I suspect that the lacking user base is what ultimately led to the underwhelming number of stages.

If anything is a killing stroke for a deathmatch game, it's a lacking user base. Playing with bots is better than nothing, but bots still don't possess the nuances or wits of humans. You'll seldom catch a bot turning around at random, making sure its back is clear. You might also be surprised if a bot actually checks around corners before entering a room, or makes sure the coast is clear before noshing or going number two. Without brains, players are easy, predictable prey even at their toughest. Without users, Bloody Good Time is little more than a mediocre action game.

Sadly, this is the fate for most, if not all, mutliplayer online games like Bloody Good Time. Even if a particular piece has an impressive user base, it's only a matter of time before it loses relevance and said user base dwindles. After that, whoever is running the show may shut down the servers, thus dooming the game to a horrible limbo-like future where it will be rendered mostly unplayable. In a way, it's as though MO titles like this one have shelf lives. Sadly, I don't think it'll be long before Bloody Good Time falls into neglect and it reaches its expiration date.
2.5/5

If you enjoyed this Bloody Good Time review, you're encouraged to discuss it with the author and with other members of the site's community. If you don't already have an HonestGamers account, you can sign up for one in a snap. Thank you for reading!

© 1998-2020 HonestGamers
None of the material contained within this site may be reproduced in any conceivable fashion without permission from the author(s) of said material. This site is not sponsored or endorsed by Nintendo, Sega, Sony, Microsoft, or any other such party. Bloody Good Time is a registered trademark of its copyright holder. This site makes no claim to Bloody Good Time, its characters, screenshots, artwork, music, or any intellectual property contained within. Opinions expressed on this site do not necessarily represent the opinion of site staff or sponsors. Staff and freelance reviews are typically written based on time spent with a retail review copy or review key for the game that is provided by its publisher.