DRiiFT Mania is a fun little WiiWare racing game from Konami that plays much like Midways Off-Road arcade series, except for one issue I cant quite get past: the controls.

I really do love the titles visual flair, complete with the little tiny vehicles that look like Micro Machines, and the little pools of oil they leave behind when they collide with something (which they do a lot). The sound is peppy and there are some great modes that you can enjoy with friends. I just cant control things as well as I need to in order to have the truly great time that lingers just beyond my fingertips.

To be precise, I cant control things very well around 5 or 10% of the time, but thats definitely enough to ruin a fair chunk of the experience for me because of how it all comes together. 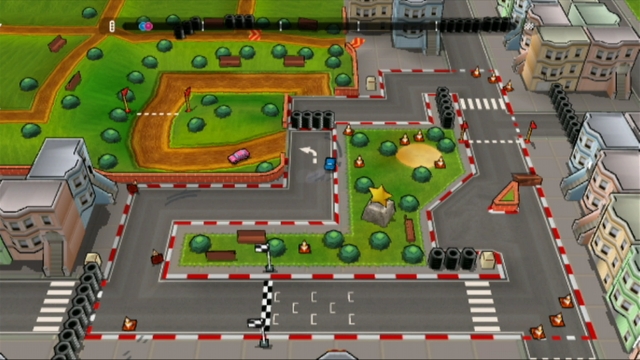 A single-player event consists of a brief series of races against several computer-controlled opponents. You choose a given vehicle class, which each offering a stable of around seven or eight cars with slightly varying attributes, and then you choose the circuit. There are four total classes, and five circuits, for a total of twenty events.

Most courses are quite small. They all fit on a single screen. The shortest ones will require you to zip around them eight times, while longer tracks might require half that. The cameras zoom level varies, according to the arena, but mostly it is pulled back a fair distance. That makes the rare course where it zooms in closer feel odd, but never to a point thats disruptive.

Courses are littered with only a few hazards, which include speed boosters, ramps and sand dunes. For the most part, theyre kept fairly clean, but it doesnt take long before one of the vehicles rams a stack of tires along the sidelines and those are cluttering the course, or something similar. The point of a race seems to be to get dirty and slide around a lot (hence the games title). Theres even an agoraphobe label that is awarded to whoever stays the cleanest, like that feat warrants a scarlet letter of sorts. 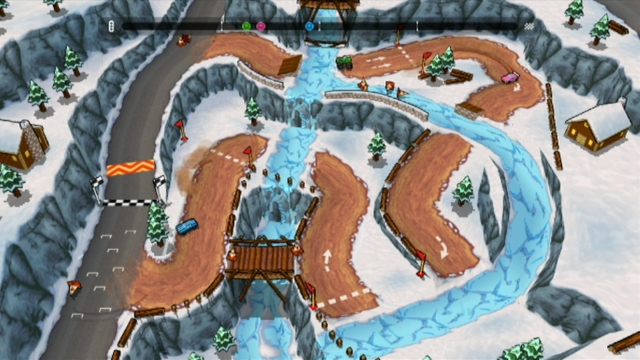 My earliest single-player race went quite poorly. I chose a red car from the garage, then the race began and I naturally thought I was controlling the red car. The first few seconds of the race, as the cars all slammed against each other before the pack separated did little to disabuse me of that notion. Then I realized that the blue car was doing especially badly, and it seemed to be turning when I was telling the red car to turn. That incompetent blue car was my car, it turns out. I made a valiant effort to catch up to the pack, but losing a half-lap of progress can be a big deal in DRiiFT Mania and I didnt quite recover.

Suppose, though, that you play and things dont go so badly for you right away. Lets say that you realize which car youre driving and you pull ahead of the pack. I actually manage to do that quite often when I race, which might lead you to suppose that I handily win most races. Alas, that is not actually the case. The issue is that the vehicles are extremely sensitive. So if you go around a corner at more than a crawl, youre going to slide like a melting ice cube in a hot skillet. If you hit a slight bump thats not even visible on the screen, the same is true.

Sliding isnt so bad, because you can learn to compensate for it and ease up on the accelerator as you speed around a corner. However, its easy to overcompensate and then either graze or run headlong against a barrier. In the case of the latter, I basically have to count that race a lost cause, because backing up in this game is a horrible exercise. If youve played other racing games, youre familiar with the inverted controls that typically apply to such scenarios. You start backing up and suddenly, left is right and right is left. This makes sense, because its how vehicles and physics actually work. And thus it is the racing genre standard only here thats not how it goes. The 1 button (which is used to brake or drive in reverse, since you hold the controller sideways) is basically just an accelerator, only it moves you backwards. The controls dont change accordingly. 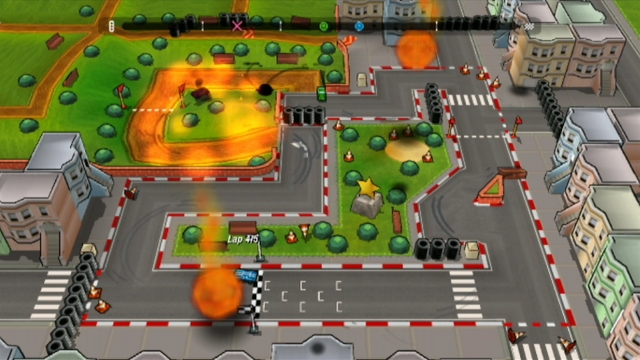 If youve been playing games long enough to develop muscle memory, then this quirk amounts to a big problem. If I hit a wall in DRiiFT Mania, which is bound to happen sooner or later on at least one of three tracks in a circuit, Ive likely just lost the race, especially if it happens anywhere near the final lap. Ive watched such scenarios unfold too many times to believe otherwise. Ive been about to lap the second place driver and I brushed a rail and I wasnt able to get going in the right direction again until everyone passed me. You cant restart a single race within a circuit, either, which is another odd design choice and one that winds up exacerbating an issue that was already bad enough without any such assistance.

So, why dont I completely hate the game? I dont hate it because multiplayer partially redeems things. If youre playing against human friends, you all have to grapple with the same absurd control scheme, so its a level playing field and it becomes a game of skill (and perhaps some luck, depending on the mode). You can race against as many as seven pals at once, if you have Wii Remote controllers and enough Classic Controller accessories and buddies, or you can enjoy challenging a smaller crew. Things can get pretty hectic and it can be a real hoot, especially in modes where fatal meteors shower the course from above.

DRiiFT Mania is almost a great game. The pieces it needs are almost all here, but the developers messed up the control scheme and that wound up mattering a lot. If you can work around that or you have friends who are up for regular play sessions, I recommend the game quite highly. Otherwise, proceed with caution.
3/5

If you enjoyed this DRiiFT Mania review, you're encouraged to discuss it with the author and with other members of the site's community. If you don't already have an HonestGamers account, you can sign up for one in a snap. Thank you for reading!

© 1998-2020 HonestGamers
None of the material contained within this site may be reproduced in any conceivable fashion without permission from the author(s) of said material. This site is not sponsored or endorsed by Nintendo, Sega, Sony, Microsoft, or any other such party. DRiiFT Mania is a registered trademark of its copyright holder. This site makes no claim to DRiiFT Mania, its characters, screenshots, artwork, music, or any intellectual property contained within. Opinions expressed on this site do not necessarily represent the opinion of site staff or sponsors. Staff and freelance reviews are typically written based on time spent with a retail review copy or review key for the game that is provided by its publisher.