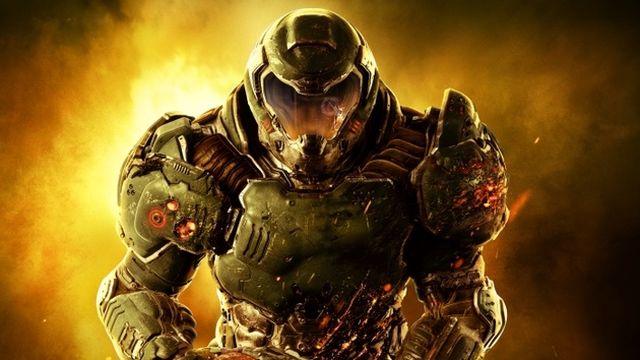 How much can you handle?

It's a question posed by every title in the Doom franchise. Can you cope with the tension that builds as you approach a key card resting upon an elevated piece of the floor, placed in an empty room? You know that stepping on the slight bump will trigger a hectic battle that could spell the end for you. So you save your progress because you worry that your supplies, health and armor are too low to win the encounter. Despite your woes, you'll nab the item and watch in horror as the walls open, revealing myriad hidden compartments. The devil's army spills out, from middling monsters who pelt you with fireballs to hefty abominations decked out with rocket launchers on their shoulders or chainguns grafted into their arms.

Ultimately, you either win through attrition, skill or save scumming, repeatedly dulling yourself to the stress and terror to which you're subjected. Eventually, you reach the stage's goal and flip the switch while demon gore drips off your armor. Revel in victory while you can, space marine, because the next level will be more of the same. Much, much more of the same, even...

2016's iteration Doom is cut from the same cloth. Sure, it provides you with more tools to guide you to victory (and thus cut the stress felt by earlier installments), but it still manages to finds horrible ways to scotch you. The game takes it easy on you in the early outs, allowing you to delight in the slaughter of possessed personnel and fire-flinging imps. It's id Software's way of letting you know this reboot is as true to the old Doom as any modern shooter can be. Before long, though, muscular Hell Knights leap into the fray and villainous Cacodemons swoop down from above. You won't engage a terrible number of them as they're introduced, but you'll notice boosts in their population with each encounter. Eventually, you cease to remember what it was like only fighting a single Revenant or Mancubus instead of six or seven. 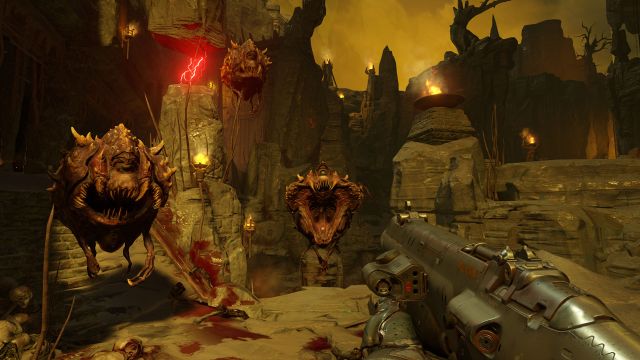 Thankfully, you glide swiftly while circling your foes this time around. Doom's mechanics and animation are smooth as can be, resulting in battles so fast-paced that several actions can transpire in a matter of seconds. You might lob a grenade into a group of monsters, fire a shotgun into an imp's face, finish off a nearby beast and then whip out the fabled BFG-9000 to decimate a cluster of foes that threaten to box you in and pulverize you, all in under half a minute.

Simultaneously, Doom takes advantage of the freaky speed and chaos. Lasers fly from dark corners of the battlefield and swarms of projectiles fired by demonic marines spread aimlessly across the terrain. Enormous barons stomp into the onslaught, running at top speed while shooting life-sapping blasts. Frustrated creatures tear into each other while more focused adversaries concentrate their fists, hooves and jaws on you. Meanwhile, you struggle to survive amid the carnage. You might pull yourself onto a ledge or duck into an alcove, but victory always amounts to the same thing: you must push yourself harder than you did in the previous bouts.

But this is a modern first-person shooter. RPG elements are par for the course nowadays, so you'll nab your share of weapon and suit upgrades, not to mention runes that act as perks. However, don't expect to trip over these goodies. As with its brethren, Doom keeps all of its most useful items locked away in secret rooms and hidden beneath floors. This amounts to prying off a vent cover or dropping off a platform, after squinting at the automap for several minutes. It's worth it, though. Those long sessions of rubbing your eyes and rotating the map typically end with an assault rifle that launches sticky explosives, a boosted ammo capacity or lengthened demons stun times. 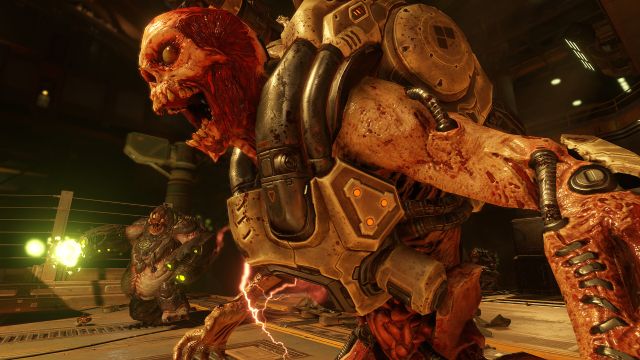 That old feeling that maybe you're ill-prepared seldom creeps over you in this installment. I'm okay with that, honestly. Doom eschewed its most stressful element in favor of a cathartic joyride. Where before you had to make every bullet count, the game now loads you up with scores of ammunition boxes and health restoratives. Combined with the aforementioned upgrades and a terrifically balanced difficulty rating, there's hardly a worry that you're not ready to deal with an upcoming threat. Of course, you also have flashy "glory kills" at your disposal, which are extremely violent finishing moves you can execute on stunned demons. These grant you a slight boost in speed and sometimes tiny health and ammo power ups. Remember, though: these features don't deter the game's ability to crush you. They only make death less irksome.

In other words, Doom works to keep you alive long enough to enjoy it and derive a little stress relief from the experience, though it still challenges you. There's nothing quite like stumbling into a tough scuffle and nabbing a berserk power up. From there, you can watch the protagonist punch creatures to pieces, tear out their hearts or split their skulls with his bare hands. It might sounds sick, but watching overpowered critters crumble to bloody bits under the power of a Gauss cannon (think high-powered laser) or rocket launcher is the perfect way to cap off a long, frustrating day. 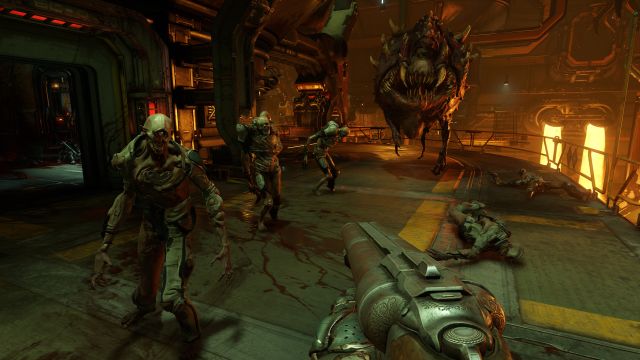 Never mind the abundance of items that sometimes soften Doom's challenge factor. This iteration remains an action-packed, heart-pounding and absolutely welcome new addition to a classic franchise. It sports just the right number of throwbacks, from unlockable classic stages to ancient design choices (e.g. secrets, evaluations between levels, etc.), but is a modern video game at its core. No, it's not the Doom you grew up with, and it doesn't need to be. That Doom still exists. Think of it more as--are you ready for this groan-worthy line,which I can't stop myself from using?--the Doom you'll grow old with.

Now if you'll excuse me, I have to throw up and kill some demons.

© 1998-2022 HonestGamers
None of the material contained within this site may be reproduced in any conceivable fashion without permission from the author(s) of said material. This site is not sponsored or endorsed by Nintendo, Sega, Sony, Microsoft, or any other such party. DOOM is a registered trademark of its copyright holder. This site makes no claim to DOOM, its characters, screenshots, artwork, music, or any intellectual property contained within. Opinions expressed on this site do not necessarily represent the opinion of site staff or sponsors. Staff and freelance reviews are typically written based on time spent with a retail review copy or review key for the game that is provided by its publisher.