Some indie games are blatant ripo... uh, homages, to popular games. Some will smash two different genres together in an attempt to create something new. And then there's Blue Fire, which decided to toss everything but the kitchen sink in and called it good. Ocarina of Time, A Hat in Time (or Mario or other 3D platformers if you prefer), Hollow Knight with a dash of Dark Souls, and Super Meat Boy. You can find ingredients of all of them in this game, despite the huge differences in tone and genre. How on Earth could that actually turn out well? And yet, somehow, Robi Studios managed to pull it off.

Let's start with Zelda, since we see a lot of that in the structure of the game itself. Blue Fire is a 3D adventure, with a large interconnected roughly medieval world, one in which you gain new abilities which help you to progress further along. You have swords as your main attack, a shield, a ranged attack that is mostly situational, and can lock on to enemies (that are mostly fought one-on-one). You can talk to other residents and find side quests to help you upgrade your equipment, set pieces that involve significant exploring, environmental puzzles such as timed switches that open doors far away that you need to reach before time runs out, and so forth. And the main goal is to defeat the five Shadows to unlock the final showdown, which often involves traversing very dungeon/temple-like areas. And of course, you have a health bar represented by a series of hearts, and can find heart container upgrades throughout the land...

Well, sort of. The heart containers are your rewards for finishing Voids, which is where A Hat In Time comes in to play. Other than swordplay and a lockon system, your hero's moveset is more akin to a 3D platformer, with a long jump, double jump, dash, and wall run/jump (albeit, like Zelda, some of those require finding upgrades). So these Voids you find throughout the Zelda-like world are instead pure platforming, requiring you to cross multiple platforms using all the skills you have in your possession while collecting 30 tokens along the way. If you fall in the void, you repeat from the beginning. And while this is the only pure platforming section of the game, you will need to use your wall jumps and double jumps and the like to traverse the main landscape too so it isn't solely locked to the Voids. The challenge level of these Voids can be viewed before entering (on a scale of 1 to 5 stars). And 5-star voids are filled with buzz-saw, traps, lasers, grinders, and all sorts of vicious level design made to gut you and send you back to the beginning. So yep, Meat Boy. Except that it's a 2 minute long platforming level that needs to be completed perfectly. Good luck with that.

That leaves Hollow Knight. There is a clear coating of "Souls" game design here, such as losing all your money when you die but can get it back if you can reach your ghost, and that health can be restored at any time by drinking from your limited flask. In addition, like Hollow Knight, you have a limited set of skills you can have activated at any one time, and must choose which ones are best for your playstyle or situation. But it's also present in the moody, melancholic atmosphere. Like many indie games, Blue Fire focuses on contrasting lighting to provide its art with simplistic character design, in this case creating a race of dark, shadowy people. And you aren't told much of what is going on at first, you are simply thrust into a desolate, nearly empty world with hints of a disaster and need to piece things together as you move along. 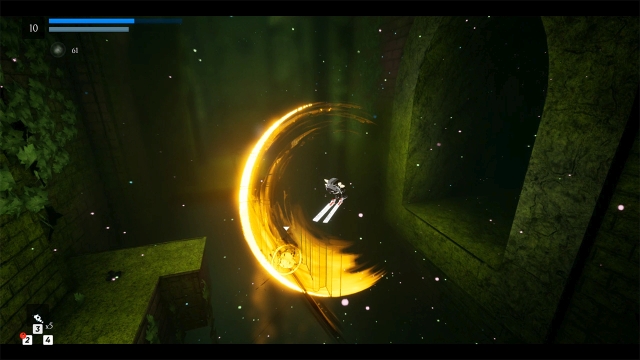 See, homages all around! And yet, despite all of that, Blue Fire still feels unique. Sure, it grabs from all of them, but you never feel like you should be playing the other games instead. The atmospheric elements and some of the mechanics are like Hollow Knight, but it's not brutally massive (quite the opposite; the game world is fairly dense) nor difficult. The 3D platformer elements are only one aspect of the game, and much of the rest of the platforming is in a more Zelda environment. But because there is so much jumping, it doesn't really feel like Zelda. It's not any of the others; it's Blue Fire. A game where an odd science experiment breaks out of an abandoned lab, wonders around a seemingly abandoned castle only to discover that he is the only hope of saving that castle and the residents. A game with lots of platforming, a fair amount of combat, some character customization, and a modicum of exploration. A game that is relatively easy to complete but devilishly difficult to do everything.

It's not a perfect game. Perhaps the largest flaw is that its camera and control is not quite perfect, something that can be a death knell for a platformer. Basically, wall jumps and wall runs are a huge part of the platforming, but it can be awkward to do correctly due to the camera moving about and uncertainty of what angle you'll jump off at. Oddly enough, I was able to "climb" a corner through sheer button mashing, which I doubt the developers ever intended. It's not enough to kill the platforming by any means, but there were one or two parts that got frustrating. The pacing of the game is another potential criticism. There's a lengthy opening before you ever find your first dungeon, followed by another almost immediately afterwards, but then the last three aren't really dungeons at all. It didn't bother me much as it kept the game from becoming formulaic, but I could see how others might prefer a more traditional approach (and it does make the latter half feel a bit rushed perhaps). I would also consider bosses to be relatively simplistic (and combat in general is not a high point for the game), often defeatable by button mashing alone and often too short of a fight to make even that feel stressful.

But none of those are dealbreakers, really. Yes, they provided moments of brief frustration or feelings of missed opportunities, but they were mere moments in an overall positive experience. I wanted to keep moving forward, to see what is next. The platforming segments for heart containers were rare enough that finding them felt exciting - anticipating a fun change of pace! - and thus created a better experience than if the whole game was like that. Each area was quite varied, not only in looks but also in feel - shifting from cramped to open or from horizontal to vertical - so it made pushing forward and seeing what came next worthwhile. While Zelda-style exploration was not the focus, there were enough side quests and little hidden stuff to make wanting to explore everything valuable, enough mandatory and optional upgrades to feel like progress was always being made, and the world dense and easy enough to navigate that backtracking didn't feel like a chore. Even if there weren't too many real dungeons, the ones that were there were meaty enough to be enjoyable. And ultimately, our little shadow creature's moveset was so fast and fluid that simply moving around was fun on its own.

3D Indie games, or at least good ones, seem to be much rarer than 2D ones, given the added complexities and difficulties in pulling it off. One that immediately calls to mind some of the best games ever like Zelda have the added pressure of trying not to seem like pale copycats, of being more worthwhile to play than simply staying with the more famous brethren. But Blue Fire manages to pull it off. It may have its homages, but by combining so many of them together it manages to instead create its own unique identity. And its fluid moveset and varied environments means it doesn't pale in comparison, and thus allows the player to forgive some of its rougher edges. Regardless of what Blue Fire may look like, it deserves to be met and experienced on its own ground.

If you enjoyed this Blue Fire review, you're encouraged to discuss it with the author and with other members of the site's community. If you don't already have an HonestGamers account, you can sign up for one in a snap. Thank you for reading!

© 1998-2022 HonestGamers
None of the material contained within this site may be reproduced in any conceivable fashion without permission from the author(s) of said material. This site is not sponsored or endorsed by Nintendo, Sega, Sony, Microsoft, or any other such party. Blue Fire is a registered trademark of its copyright holder. This site makes no claim to Blue Fire, its characters, screenshots, artwork, music, or any intellectual property contained within. Opinions expressed on this site do not necessarily represent the opinion of site staff or sponsors. Staff and freelance reviews are typically written based on time spent with a retail review copy or review key for the game that is provided by its publisher.