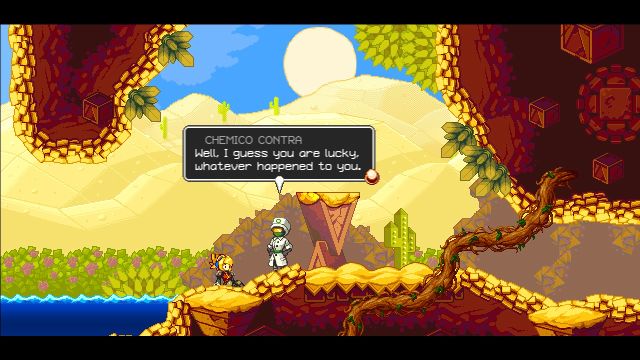 When I play a platformer, the last thing I expect is an overblown story. I might anticipate some dialogue or a few deeper themes, but not long soliloquies or overly chatty segments. When these crop up in such titles, I usually get impatient because damn it, I came to play and not watch. However, if I hit a point in the proceedings where I stop complaining about cutscenes, then obviously the game is doing something right.

Iconoclasts starts off both talkie and confusing. It's a double whammy. You want to explore and shoot things with protagonist Robin, but her brother Elro wishes to chat about their father's death (not a spoiler, this is revealed at the beginning) and keeping Robin safe. Meanwhile, everyone in this dystopia gabs about penance and agents and ivory and "One Concern," while you struggle to keep up.

Ruined houses dot the land and you don't know why. Talk about pirates circulates and there's some hoopla about you being an unregistered mechanic or something like that. Next thing you know, you're in trouble with the law and people die because of it. You're in jail with a girl who apparently has strong body odor and you're still trying to get your bearings. The game introduces a few characters through drawn out narrative segments, especially a fairly humorous one involving the pretentious General Chrome. You continue to scratch your head, doing your best to piece everything together.

"Just humor me," the game says. I did, and eventually I caught on. 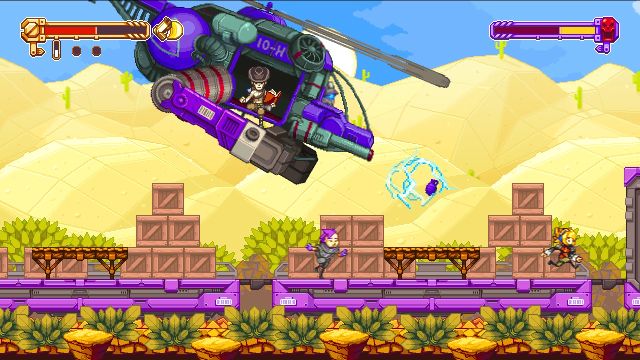 Things fall into place after a few major events. You begin to understand some of Robin's allies, including the brash, shotgun-toting Mina. She's searching for a way to defeat the agents, who seem to be indestructible. However, her constant journeying strains her relationships with her mother and her partner. Villains don't get left out, either, with characters like Agent Black ultimately drawing some sympathy. Black may be vicious and heartless, but you come to ultimately understand her lack of emotion and maybe even pity her because of it.

Eventually, I stopped caring about the constant interruptions because they were kind of amusing. It doesn't try to be Shakespearean so much as "Earthbound-ian," but with gracious helpings of dark humor. Playful little nuances slip into dialogue sequences now and then, like someone complaining about Mina's scent or a recurring doctor who dispenses random, basic medical advice.

But this adventure isn't entirely lighthearted. It might crack a joke at one point, then horribly kill off a major character later on. It isn't afraid to bump off a child or two, or show you a horrific scene where a fully grown tree bursts from a foe's body. 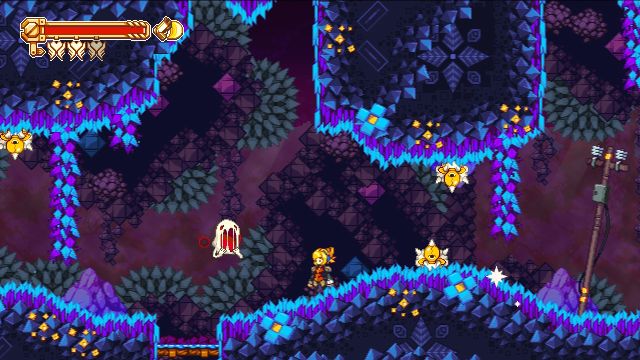 The plot takes you through some wild playable events, too. You avoid bombs from a purple helicopter, fight a giant lion made out of rubble and defend yourself against an assassin who tries to stab you through the top of an elevator. Seriously, you can only move one space side to side, dodging his blade while trying to nail him with fully charged shots from your stun gun. You even run across some B-movie-ish material, battling a giant worm from space or watching one of your adversaries transform into a semi-liquid, mutated nightmare.

When Iconoclasts finally shuts up, you get to explore a little. If you've been following this title on Steam, you might be under the impression the game is a Metroidvania. It isn't, though, at least not purely. The campaign is pretty linear, with new areas revealed via story events rather than through newly found abilities. It's disappointing at first, because you don't really get to experiment with very many different branches or find neat little secrets very often.

Don't get me wrong; you'll get plenty of usage out of your special items, all of which are different weapons, and engage in terrific sequences that make up for the lack of exploration. Each stage offers a wide variety of obstacle courses and puzzles that rely on either upgraded wrenches--Robin's melee weapon--or one of three different guns. One handy ray gun swaps your position with an object or enemy, allowing you to slip between narrow gaps or enter tight spaces. Another firearm is your standard grenade launcher, which can send certain platforms flying across the screen or into the air. The wrench starts out pretty standard, but eventually gives off electricity or zaps certain items. For instance, you might need to electrify a probe to open a door down the hall. The instant you move away from the probe, though, you cease to shock it and thus shut the door. Of course, you could charge an item, like a block or a grenade, and leave that near the probe... 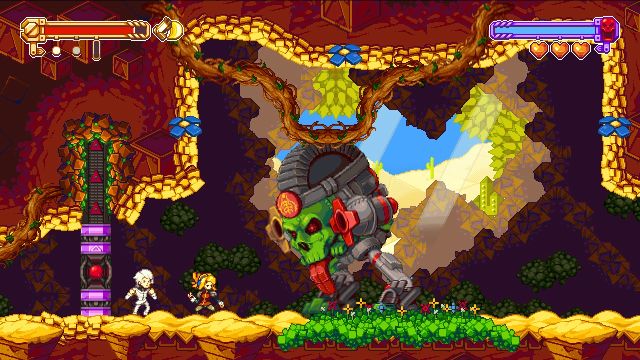 As with more traditional Metroidvanias, you benefit from backtracking. Some items remain in blocked off corners, and require weapons you may not yet possess. Returning to them later nets you some crafting items, which you can take to a workbench to create "tweaks." These handy tools give you passive bonuses or sometimes unlock new abilities. That way you can prevent one instance of damage or breathe underwater for a long period or increase the duration of your electricity. Or hey, you could even learn to double jump or discover how to manually detonate grenades. The only catch is that a tweak temporarily breaks when you take damage, though you can restore it by collecting ivory.

This title isn't going to go easy on you, so those tweaks will come in handy. Late game soldiers shrug off most of your attacks, begging you to experiment with divergent ways to take care of them efficiently. Some are vulnerable to explosives, while others only perish if you swap places with them first. After all of your adversaries and obstacles have worn you down, you enter an awesome battle with a boss that very much relies on pattern recognition. While you're busy gawking at the boss' impressive sprite, you might catch the occasional telegraph or two, warning you which maneuver your foe is about to pull. You might be able to react accordingly at first, but eventually the bosses stack moves on top of moves, raining hell upon you like no other. Odds like that are worrisome, to be sure, but they're also exhilarating and well worth experiencing.

Iconoclasts is hellish in its own way, and I like it. Its difficulty rating can be punishing, but that paves the way for excellent boss encounters. The story tends to be long-winded, but more than justifies its existence by being entertaining in the process. It eschews Metroidvania conventions in favor of levels brimming with engaging challenges. Exciting segments wow you and get a chuckle or two out of you, then the characters meet with some kind of heartache. "Just humor me," the game once said, knowing its roughness would bring about some fantastic content. I humored it, and I don't regret it.
4/5

If you enjoyed this Iconoclasts review, you're encouraged to discuss it with the author and with other members of the site's community. If you don't already have an HonestGamers account, you can sign up for one in a snap. Thank you for reading!

© 1998-2020 HonestGamers
None of the material contained within this site may be reproduced in any conceivable fashion without permission from the author(s) of said material. This site is not sponsored or endorsed by Nintendo, Sega, Sony, Microsoft, or any other such party. Iconoclasts is a registered trademark of its copyright holder. This site makes no claim to Iconoclasts, its characters, screenshots, artwork, music, or any intellectual property contained within. Opinions expressed on this site do not necessarily represent the opinion of site staff or sponsors. Staff and freelance reviews are typically written based on time spent with a retail review copy or review key for the game that is provided by its publisher.