Many of us old-schoolers want to believe that some ancient games are still relevant, and could still be enjoyed by present and future generations. So we lie to ourselves and say that some titles have stood the test of time, knowing full well it's a dirty fib. Some games have aged and their entertainment values have depreciated along with the quality of media (audio, visuals, etc.). Case in point: Ghost Manor.

Here we have a piece that sounds unthinkable; a horror game on a dusty old system best known for arcade-style titles that serve as lightly amusing mini-games nowadays. If you think this concept sounds painful, you're absolutely correct. Playing Ghost Manor today, despite the nostalgia it invokes, will leave you desiring either a deeper and more detailed experience or a simpler and more addictive arcade action title. Moreover, it's not a game that present and future generations are going to choose over, say, a current-gen Resident Evil title.

Don't get me wrong. I'm not bullying this game because of its age. If my previous reviews are any indication, I love me some old games. Ghost Manor's age isn't what's in the hot seat, but its core concepts, including an idea seldom provided by Atari 2600 titles: variety! While that might get some old-schoolers' salivary glands going, you have to remember that the Atari 2600 benefits from keeping it simple, which Ghost Manor also attempts to do. Therein lies the problem. Both concepts, the varied gameplay and simplicity, are at odds with one another. You'll play a stage, bask in its uncomplicated glow, and then end the affair wanting a more challenging version of it that will never arrive. You'll move on to another style of gameplay and repeat the process, all the while wanting some consistency.

Even when you begin the game, you find simplicity and complexity at odds. It kicks off with a loving couple standing in a graveyard while the game belts out a classic Halloween song, unfortunately limited to Atari 2600's lacking audio capabilities. What should be a great atmosphere-setter instead sounds like an October classic as played by an orchestra of flatulence. It demeans the effect of the minimalistic narrative, something alien to video games at the time. 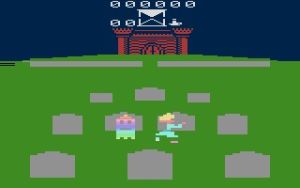 After you've spent your fart jokes, you'll move onto stage one. Here you'll chase a rainbow-colored ghost around a graveyard in an attempt to bump into it a certain number of times. Each bump nets you a spear necessary for victory in the following stage. The problem with this event is that it's impossible to lose, and therefore the most tedious and dull segment in the experience. Had Ghost Manor stuck to 2600 conventions, we could have seen this stage expand and mature, perhaps include multiple obstacles or constraints that would make it less of a gimme. Instead you play it through once and move on, trying to put what could have been out of your mind.

After you've nailed the specter enough times, you'll approach the titular manor. Here the game shifts gears and becomes a Space Invaders clone in which you toss spears at a menagerie of fiends, ranging from titanic insects to a devious wraith. Keeping this motley crew in line is their ring leader, a mummified giant brandishing an enormous battle axe that has a tendency to chop players who hesitate for too long. As if this constraint isn't enough, your spears are finite. Run out of those and you'll have no choice but to reset the game or allow the undead behemoth to split you down the middle. 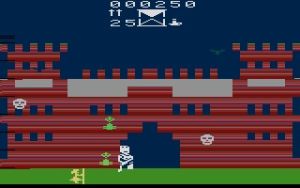 Screw chasing Lucky's restless spirit; this level is where it's at. It only takes a bit of practice to fell every last foe, mummy included, before moving on to the next stage. Again, you're left wanting more spear-throwing, axe-dodging, mind-your-ammo mayhem. Hell, if the developers would have expanded this stage alone, the game would have been awesome! Alas, it's over quickly and all downhill after this.

Still wiping the minion gore off your dress, you enter Dracula's abode and engage in levels three and four, both of which consist of winding hallways and massive moving walls that threaten to reduce you to a greasy stain. Spread throughout these floors are several coffins for Dracula's would-be mistresses, a couple of which ironically contain crosses used to battle Ol' Drac himself.

I'm not going to sugarcoat it. After playing the intense second stage, a tough act to follow, levels three and four are tame, tedious, and simple to figure out. More than anything, they feel like filler used to bridge the gap between warring with the demons on the outside of the manor and taking on Dracula in the final stage. This is where the developers could have either expanded on previous concepts or dreamed up more creative and challenging stages. 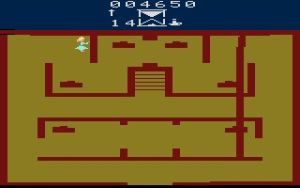 I won't spoil the end battle for you, but I will say that the pace doesn't pick back up. The final conflict is a tough stage where you can happily toss out intuition and rely on either an instruction manual or a FAQ. Sadly, you only get one life, so muck up once and you'll have to take it from the top.

When I finally completed this game, it only took me about five minutes. After putting Dracula to rest, I didn't feel accomplished or amused, but numb. I suspect that this was due to Ghost Manor's inability to step up its game. Call me crazy, but I've always been a fan of repetitive Atari 2600 games that increase in challenge factor as you play. Ghost Manor sacrifices incremental difficulty boosts for variety, essentially providing you with multiple "level ones" that lack the challenge, bite and addictiveness of a typical 2600 game. I'm sure the variety featured here looked awesome when the game first launched, but we live in an era where variety is not only expected, but means a lot more than playing four to five introductory stages. In other words, if I want variety, I don't have far to go to obtain it.

Where I play my favorites from this console repeatedly, I find myself only revisiting Ghost Manor only once in a while. It's more of a novelty; a toy that's neat to tinker with on rare occasions, but not repeatedly play. As an Atari 2600 fan, that's something I look for in an entry. If I don't find it, then I leave the game alone and spend my time with more exceptional titles. Believe me, there are plenty of those.

If you enjoyed this Ghost Manor review, you're encouraged to discuss it with the author and with other members of the site's community. If you don't already have an HonestGamers account, you can sign up for one in a snap. Thank you for reading!

© 1998-2021 HonestGamers
None of the material contained within this site may be reproduced in any conceivable fashion without permission from the author(s) of said material. This site is not sponsored or endorsed by Nintendo, Sega, Sony, Microsoft, or any other such party. Ghost Manor is a registered trademark of its copyright holder. This site makes no claim to Ghost Manor, its characters, screenshots, artwork, music, or any intellectual property contained within. Opinions expressed on this site do not necessarily represent the opinion of site staff or sponsors. Staff and freelance reviews are typically written based on time spent with a retail review copy or review key for the game that is provided by its publisher.