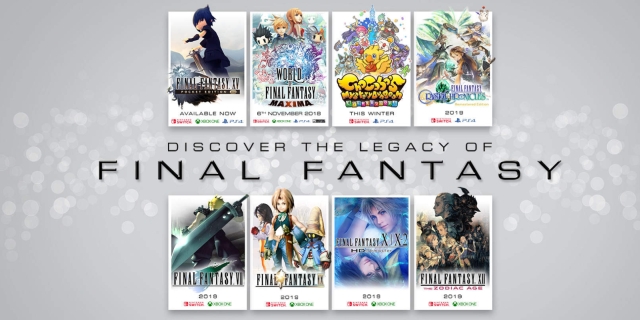 The upcoming game will expand on the recent PS4 and Vita release.

Square Enix had a very busy afternoon yesterday when a Nintendo Direct revealed the company's plans to bring numerous Final Fantasy games to Nintendo Switch, PlayStation 4, Xbox One and PC. One of the games announced for that treatment is World of Final Fantasy Maxima.

Originally released on PlayStation 4 and Vita in 2016 and later brought to PC in 2017, World of Final Fantasy is a cuter take on the epic series of fantasy RPGs. It is intended to introduce players to heroes from a variety of mainline games, as a sort of crash course in the franchise.

World of Final Fantasy Maxima is the "powered up" version of that game. On its page devoted to the big reveal, Square Enix notes the new release includes new characters/champions and monsters/mirages to "add even more fun and excitement to this unique adventure."

World of Final Fantasy Maxima is due on Nintendo Switch, Xbox One, PlayStation 4 and Steam on November 6, 2018. If you're interested in more information about which games were covered in today's announcements, you can check this article or this article.

If you enjoyed this World of Final Fantasy Maxima article, you're encouraged to discuss it with the author and with other members of the site's community. If you don't already have an HonestGamers account, you can sign up for one in a snap. Thank you for reading!

© 1998-2021 HonestGamers
None of the material contained within this site may be reproduced in any conceivable fashion without permission from the author(s) of said material. This site is not sponsored or endorsed by Nintendo, Sega, Sony, Microsoft, or any other such party. World of Final Fantasy Maxima is a registered trademark of its copyright holder. This site makes no claim to World of Final Fantasy Maxima, its characters, screenshots, artwork, music, or any intellectual property contained within. Opinions expressed on this site do not necessarily represent the opinion of site staff or sponsors. Staff and freelance reviews are typically written based on time spent with a retail review copy or review key for the game that is provided by its publisher.