It's time to get serious. Episode 5, A Nest of Vipers, is the penultimate episode in Telltale's Game of Thrones game series. Expect lots of Asher in this episode, with one or two long-telegraphed plot points finally happening, and maybe some unexpected twists as well.

This review is specifically for Episode 5 in a series, so expect spoilers for previous episodes, as well as up to the later part of the fourth season of the TV series it ties into. If you're behind, consider checking out the reviews for episodes one, two, three, or four. 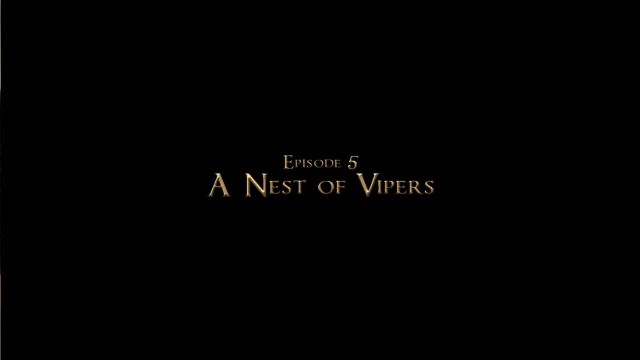 After last episode's cliffhanger, we naturally begin with Rodrick confronting Ramsay Snow at Ironrath. Ramsay is having a chat with Talia. Some not-that-interesting story stuff happens, culminating with Ramsay practically daring Rodrick to slit his throat. This might have been much more effective if Ramsay wasn't a TV show character, meaning he has impenetrable plot armour. He will not be dying in some tie-in video game and that's all there is to it. The important thing to take away from this is that Ramsay doesn't really care any more about this little conflict between House Forrester and House Whitehill. He's just going to let you all duke it out and whoever doesn't die is the winner.

Later, Talia will successfully sniff out the mysterious traitor. It's another anticlimax, since it's exactly who you think it will be, even though it makes no sense. You'll be given the choice to kill the traitor or spare him. This doesn't seem to have any serious repercussions in Episode 5, but that doesn't mean there won't be any later.

Meanwhile, Gared is still north of the Wall with his companions, Finn and Cotter, and their new best friend Cotter's sister Sylvi. Sylvi is a fun new character, with a spunky personality. She's tough. Tougher than Cotter, certainly. She doesn't trust Crows, of course, as a Wildling, but Gared can try to win her over anyway. There's some drama about whether Cotter will abandon Gared and his hunt for the fabled North Grove. Finn just sort of whines a lot if he's present, which is weird, considering he wasn't even invited to come along in the first place, he just kind of showed up. All the fun is interrupted by a White Walker attack. If you haven't already begun to wonder why Gared is even in this game, this will probably be the moment that makes you question him. Is Gared's thread going anywhere? Is he basically just here so we can see that boring Jon Snow and some White Walkers? It's getting difficult to care. 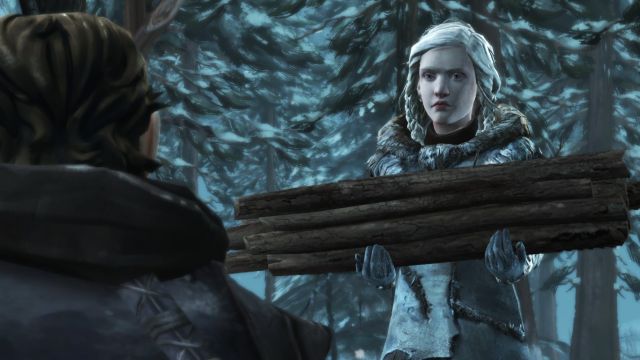 Back in King's Landing, Mira's ruining friendships. Sera's not pleased with her for her little outburst at Tommen's coronation last episode. Mira only managed to sneak in with Sera's help, and it reflects badly on her. Who can blame her for being upset? Does she even care when Mira gets dragged away by some castle guards?

Mira gets another little chat with Cersei, which is always fun. She's willing to get rid of Andros for Mira, but she wants something in return. She wants Mira to visit Tyrion in the dungeon to try and suss out who he's planning to call to his defense at his murder trial. This is difficult to believe. They're not exactly best friends. Plus, Tyrion is a human bullshit detector, and Mira's not that good of a liar. Well, do your best! 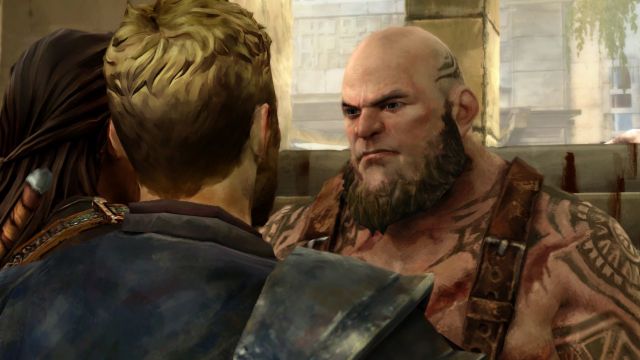 Finally, there's Asher, who has the longest and most interesting plot thread of the episode. Whether or not Beskha's former slave master survived the last episode, you can still get your reward, though you'll have to make a case for it if he was killed. This will result in Beskha being a big sooky baby, as always, but you can talk her down from her hysteria as well. You won't get any sellswords, but you can get a buttload of gold to hire your own sellswords with, and that's almost as good.

So where will you find these sellswords? Why, Beskha's old home, the fighting pits, of course. You'll have to win these savages over, which, means proving your strength in the pits themselves. You'll go several rounds with one particular warrior in a strangely slow-paced, methodical fight. It feels different from most QTE fights in the series, but it works. As is tradition in these situations, you can decide whether to finish your opponent or spare his life before giving a rousing (?) speech to really seal the deal. 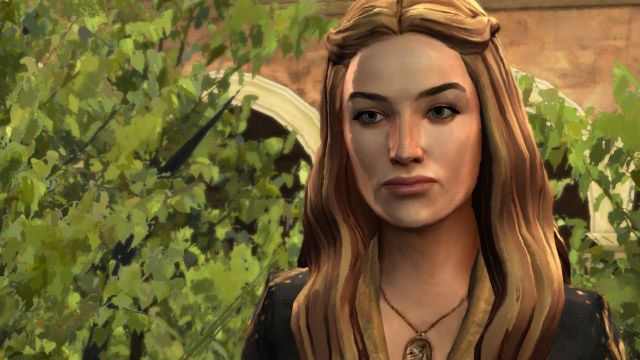 As the group sets sail for Westeros, Beskha may or may not have cold feet, depending on whether or not you tried to save her from the dragon several episodes ago. Either way, uncle Malcolm isn't coming with you. He's gotten an offer to stay with Daenerys and fight alongside her, and have you seen Daenerys?

Upon landing in Westeros and meeting up with Rodrick, both groups are surprised by Gryff and WAY too many men to be that sneaky. Worst family reunion ever. This is where you'll make the most interesting decision of the episode, and perhaps the whole series, but I won't spoil it.

This episode is a mixed bag. Everything involving Rodrick before Asher shows up is stupid. All of it. This is unforunate, because Rodrick's story has been the most consistently interesting up until this point. Gared feels more pointless than ever. Mira's arc is getting a little silly, but it's still pretty good, if only because Cersei and Tyrion are in it. Asher is the real saving grace of this episode. He has been a lot of fun since his first appearance, and while his supporting cast has its highs and lows, it's exciting to see him in Westeros, and I'm looking forward to seeing where he takes things from here. It's unfortunate that the rest of the story threads are starting to fray, because at this point, I'd be fine of the final episode was all Asher all the time.
3/5

If you enjoyed this Game of Thrones - A Telltale Games Series Episode 5: A Nest of Vipers review, you're encouraged to discuss it with the author and with other members of the site's community. If you don't already have an HonestGamers account, you can sign up for one in a snap. Thank you for reading!